OHL ‘On the Run’ Player of the Week: Albert Michnac 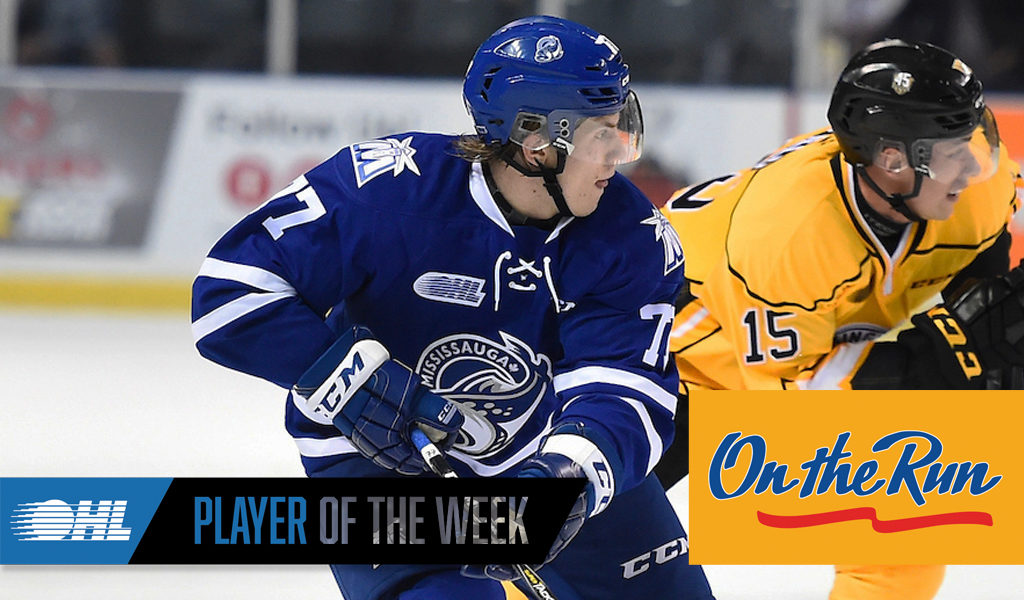 Toronto, ON – The Ontario Hockey League today announced that forward Albert Michnac of the Mississauga Steelheads is the OHL ‘On the Run’ Player of the Week for the week ending November 5 after scoring eight goals in three games with a plus-minus rating of plus-3.

Michnac recorded a trio of multi-goal performances for the surging Steelheads contributing to nearly half of the team’s total offensive output and earning first star honours in three straight contests.  On Friday night he scored his first career hat-trick despite a 5-4 shootout loss to the Owen Sound Attack, then scored twice including the game-winner in Saturday’s 4-3 road win over the Sudbury Wolves.  His week wrapped up Sunday with another hat-trick, this time against the Eastern Conference leading Peterborough Petes, helping the Steelheads to a 9-2 victory.  The Trout have now earned 11 of a possible 12 points over the past two weeks and are currently tied for eighth place in the East with an overall record of 7-9-0-1.

Michnac, a 20-year-old from Prague, Czech Republic, is now tied for tenth overall in league scoring with 23 points in 17 games including 12 goals and 11 assists.  He joined the Steelheads as the club’s first round pick (37th overall) in the 2017 CHL Import Draft after competing last season as a member of the Guelph Storm where he tallied 15 goals and 24 assists for 39 points in 65 games.

Watch video highlights of Michnac and the Steelheads against the Petes.

Also considered for the award this week was St. Louis Blues prospect and OHL top scorer Jordan Kyrou of the Sarnia Sting who led the league with nine points in three games including three goals and six assists, while 2017 NHL Draft prospect Blade Jenkins helped the Saginaw Spirit win three straight games collecting five goals and one assist.  In goal, Carolina Hurricanes prospect Jeremy Helvig backstopped the Kingston Frontenacs to a 3-0-0-0 record making 76 stops for a goals-against-average of 1.00 and save percentage of .962.