OHL ‘On the Run’ Player of the Week: Brandon Saigeon 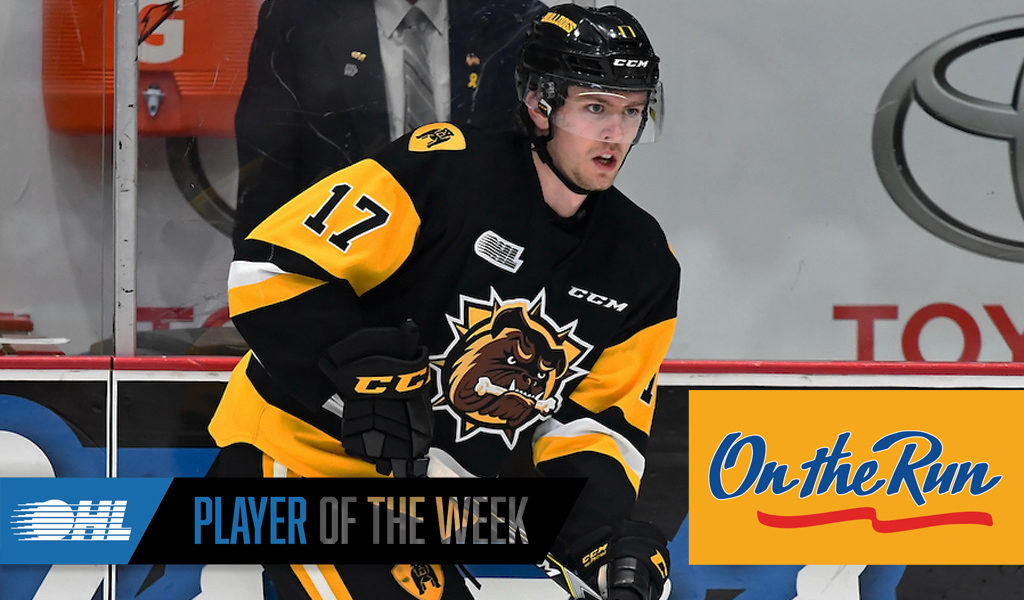 Toronto, ON – The Ontario Hockey League today announced that forward Brandon Saigeon of the Hamilton Bulldogs is the OHL ‘On the Run’ Player of the Week for the playoff week ending May 13 after scoring four goals and two assists for six points in four games with a plus-minus rating of plus-6.

Saigeon helped the Bulldogs capture their first OHL title in the franchise’s three-year history in Hamilton bringing the Robertson Cup to the Steel City for the first time in 42 years since the 1976 champion Fincups.  The Bulldogs won three of the last four contests of the 2018 Rogers OHL Championship Series defeating the Sault Ste. Marie Greyhounds in six games.  Saigeon’s week began with a first star performance in Game 3 last Monday scoring twice in the 6-5 victory.  The Greyhounds evened the series with a 3-2 overtime triumph in Game 4 on Wednesday before the Bulldogs reclaimed the series lead in Game 5 on Friday with Saigeon delivering a three-point effort including the game-winning goal plus two assists as third star of the 6-4 win.  Back in Hamilton for Game 6 on Sunday, Saigeon’s second period goal ignited the home team as the Bulldogs erased a 2-0 deficit and a later came back from being down 3-2 in the third period to clinch the title with a 5-4 victory.  As OHL champions, the Bulldogs have advanced to the 2018 Mastercard Memorial Cup in Regina where they’ll open competition on Friday night against the host Pats.

A 19-year-old from Grimsby, Ont., Saigeon has played his entire four-year OHL career with the organization who chose him fourth overall in the 2014 Priority Selection.  He finished third in team scoring during the post-season collecting 25 points in 21 games including 18 goals which ranked second overall among OHL leaders.  During the regular season he set new career-highs in all offensive categories with 35 goals and 35 assists for 70 points in 65 games.

“It’s unbelievable. We made history tonight.”

Grimsby’s @brandonsaigeon led @BulldogsOHL with 18 playoff goals and takes pride as one of the team’s local connections bringing an #OHLChampionship to Hamilton. pic.twitter.com/Qgqu9ezeLz

Watch video highlights of Saigeon and the Bulldogs against the Greyhounds in Game 3, Game 4, Game 5, and Game 6.

Also considered for the award this week was Tampa Bay Lightning prospect Boris Katchouk of the Greyhounds who scored three goals and five assists for eight points in four games finishing atop the OHL playoff scoring race with 37 points in 24 games.  St. Louis Blues prospect Robert Thomas of the Bulldogs was named Most Valuable Player of the 2018 OHL Playoffs finishing with 32 points in 21 games with a final week that included three goals and two assists for five points in four games.  In goal, Detroit Red Wings prospect Kaden Fulcher backstopped the Bulldogs to all three wins in final week action with just one overtime loss making a total of 126 saves for a goals-against-average of 3.85 and save percentage of .887.