OHL ‘On the Run’ Player of the Week: Connor McMichael 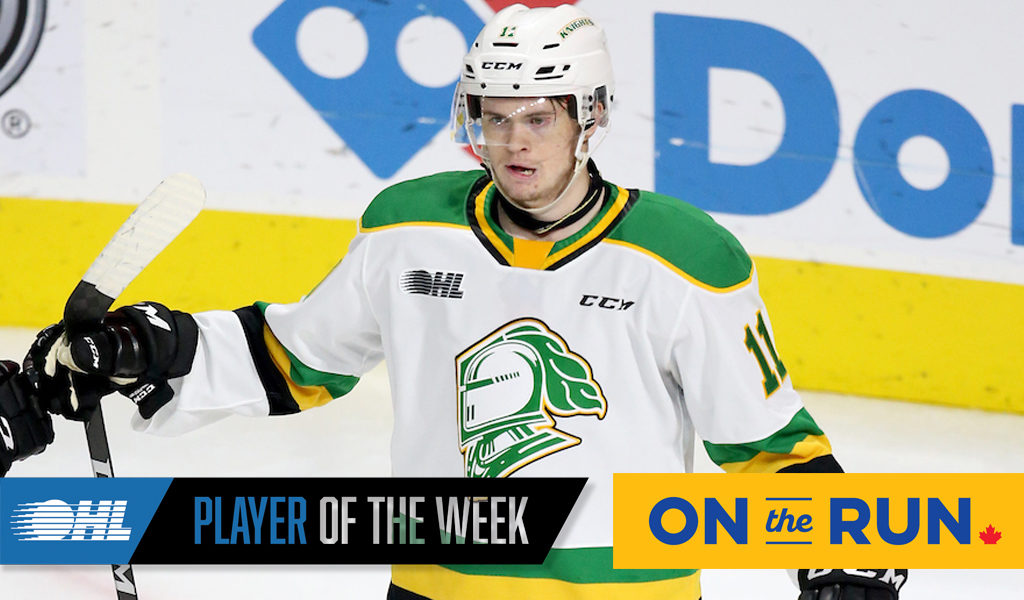 Toronto, Ont. – The Ontario Hockey League today announced that Washington Capitals prospect Connor McMichael of the London Knights is the OHL ‘On the Run’ Player of the Week with eight points including four goals and four assists over two weekend contests.

McMichael earns the award for the second time this season, helping the Knights win back-to-back games to give them victories in five of their past six. The 6-foot, 181Ib. centre registered a career-high six points, scoring the overtime winner in Friday’s 7-6 win over the visiting Erie Otters. With the game tied 4-4, McMichael scored late in the second period before tying things up with 1:05 remaining in regulation. He capped-off his hat-trick with 1:56 remaining in overtime, becoming the first Knights player to record six points in a game since Robert Thomas on October 27, 2017. McMichael continued his strong weekend with a goal and an assist in Sunday’s 5-1 road win over the Oshawa Generals, earning second star honours while extending his run of consecutive multi-point performances to six.

An 18-year-old native of Ajax, Ont., McMichael sits second in OHL scoring with 34 points (17-17–34) over 14 games, with 19 of those points coming over his past six outings. The former 11th overall pick in the 2017 OHL Priority Selection has split his three-year OHL career between London and Hamilton, recording 61 goals, 61 assists and 122 points over 141 regular season games. He was Washington’s first round (25th overall) pick in the 2019 NHL Draft. McMichael will represent Team OHL in this week’s CIBC Canada Russia Series.

Also considered for the award this week were Hamilton Bulldogs teammates Arthur Kaliyev and Jan Jenik who each posted four goals, four assists and eight points over three games as the Bulldogs played to a 2-1 record.