OHL ‘On the Run’ Player of the Week: Evgeniy Oksentyuk 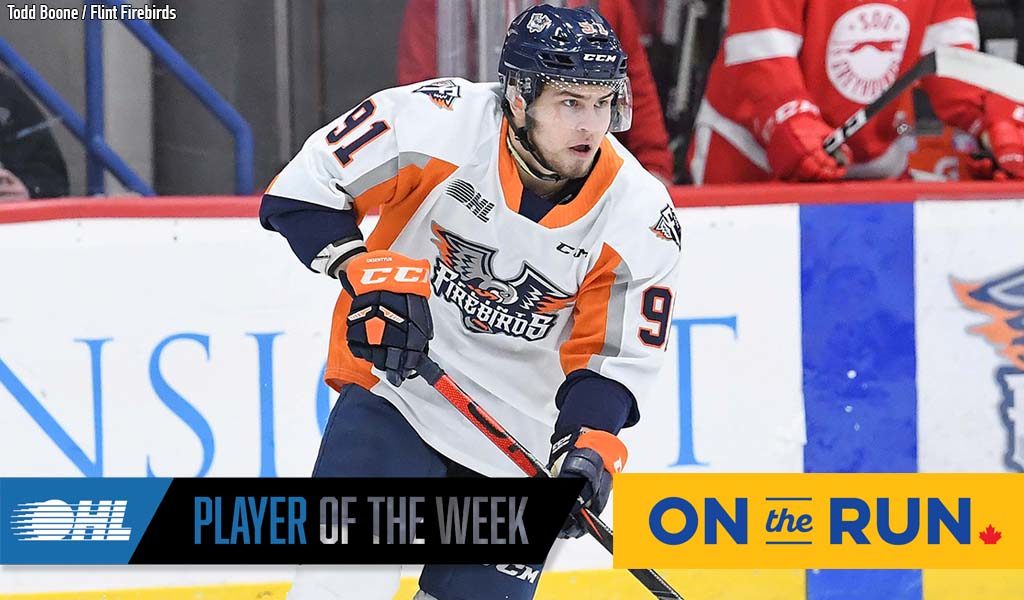 Toronto, Ont. – The Ontario Hockey League today announced that Flint Firebirds forward Evgeniy Oksentyuk is the OHL ‘On the Run’ Player of the Week with eight points including two goals and six assists in three games along with a plus/minus rating of plus-3.

This marks the fourth different time a Firebirds player has received the award this season as Oksentyuk helped the club extend it’s franchise-best winning streak to 10 games with road wins in Erie, Hamilton and Oshawa. Oksentyuk recorded an assist in Friday’s 5-4 overtime win over the Otters before collecting three helpers in a 7-3 win over the Bulldogs on Saturday afternoon. The 5-foot-7, 157Ib. winger wrapped up the weekend by matching a season-high with four points including two goals and two assists in a 5-3 win over the Generals, pushing his current point streak to eight games. The Firebirds wrapped up the weekend as winners of a club record seven consecutive road contests, matching their season-high mark of 32 victories set in 2016-17.

An 18-year-old native of Brest, Belarus, Oksentyuk sits second in Flint scoring with 62 points (25-37–62) over 46 games. He set a Firebirds club record earlier this season when he strung together a 17-game point streak from Nov. 15 to Jan. 17. The left-winger represented his native Belarus at the 2020 IIHF U20 Division 1A World Championship in December, recording seven points (1-6–7) over five contests. Oksentyuk was chosen by the Firebirds with the fifth overall pick of the 2019 CHL Import Draft. He attended rookie camp with the Arizona Coyotes last September.

Also considered for the award this week were Ottawa 67’s winger Jack Quinn who boosted his goal-scoring total to a league-leading 44 with eight points (3-5–8) over three contests. Peterborough Petes winger Nick Robertson was considered after pushing his goal-scoring streak to 14 games as part of an eight point (4-4–8) week.