OHL ‘On the Run’ Player of the Week: Hunter Jones 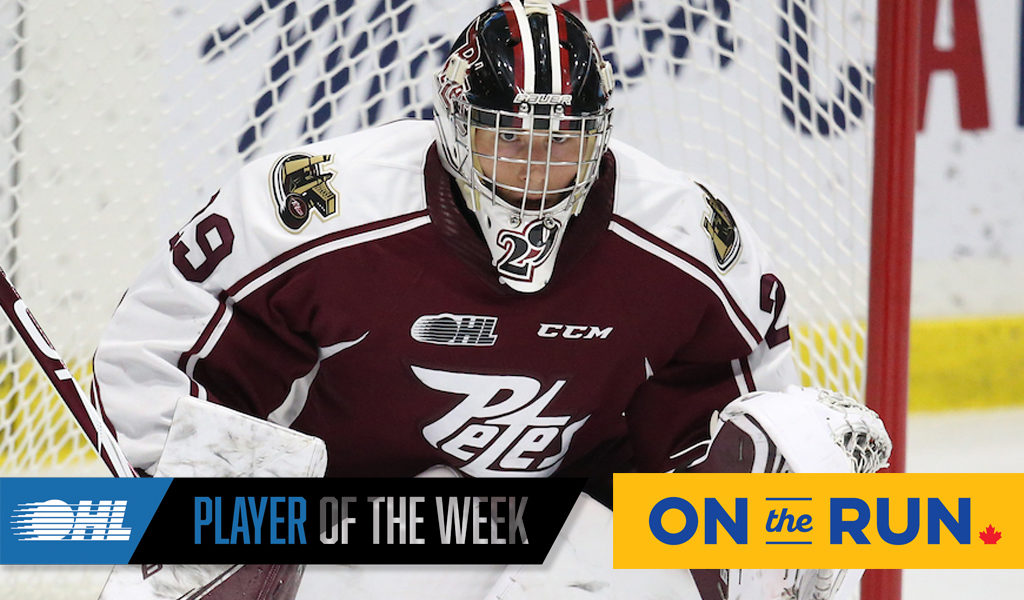 Toronto, Ont. – The Ontario Hockey League today announced that Minnesota Wild prospect Hunter Jones of the Peterborough Petes is the OHL ‘On the Run’ Player of the Week for the week of regular season action running from October 14th through the 20th with a 3-0 record, 1.67 goals-against average and .943 save percentage.

Jones earns the award for the first time in his OHL career after backstopping the Petes to a perfect 3-0 record. He made 22 saves in Thursday’s home opening win over the Hamilton Bulldogs before posting back-to-back road wins with one goal allowed on Friday and Sunday. Jones earned first star honours, turning aside 32 of 33 shots on Friday night in Ottawa as the Petes defeated the 67’s 3-1. He proceeded to stop 28 of 29 in Sunday’s 2-1 victory over the CHL’s top-ranked Oshawa Generals, earning his 40th career OHL win in the process.

A 19-year-old native of Brantford, Ont., Jones is off to a 9-1-0-0 start to the 2019-20 season, posting a league-leading 2.41 goals-against average along with a .919 save percentage and one shutout. He owns a career 40-34-2-2 record over 82 career OHL regular season contests, posting a 3.54 goals-against average and .896 save percentage with four shutouts. Originally Peterborough’s fifth round pick in the 2016 OHL Priority Selection, Jones was selected by the Minnesota Wild in the second round of the 2019 NHL Draft.

Also considered for the award this week was Sarnia Sting forward Sean Josling who helped his team recover from an 0-7 start with three straight wins, recording 11 points (6-5–11) in the process. Draft eligible Saginaw Spirit forward Cole Perfetti also had a strong week, putting up 10 points (3-7–10) over three games as the Spirit went 3-0.