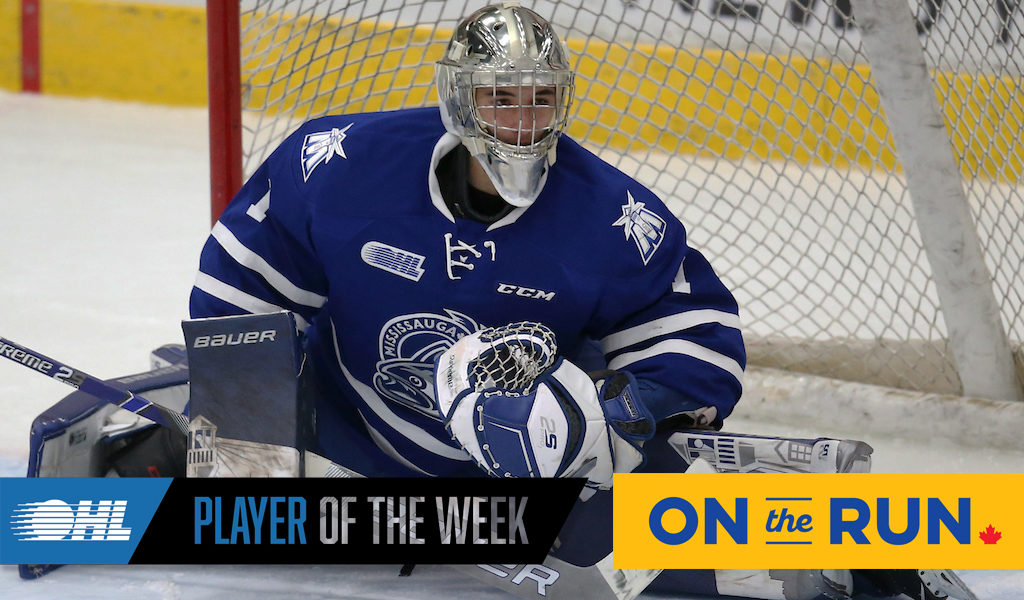 Toronto, ON – The Ontario Hockey League today announced that Los Angeles Kings prospect Jacob Ingham of the Mississauga Steelheads is the OHL ‘On the Run’ Player of the Week for the regular season week ending February 10 posting a 3-0-0-0 record with a goals-against-average of 1.26 and save percentage of .956.

Ingham turned aside 86 shots in 190 minutes of action and was a perfect 6-for-6 in shootout attempts last week between-the-pipes for the Steelheads who improve their Eastern Conference record to 26-21-5-1 and stand alone in fifth place.  On Thursday night Ingham made 29 saves and earned first star honours in a 3-1 road win over the Central Division leading Niagara IceDogs.  He played his way to first star recognition one night later making 30 saves in another win against first place talent edging the East Division leading Ottawa 67’s by a 2-1 score in the shootout.  His week wrapped up Sunday with a 27-save performance and second star honours in a 3-2 shootout win over the Windsor Spitfires.  It marked the second straight game where Ingham along with forward Cole Carter stole the show on home ice in the shootout with the netminder denying all three attempts and the captain scoring the winning goal.

Stupendous scorpion style save by @JakeIngham 😱🦂🚫@LAKings prospect somehow gets the toe up for a #BestOfOHL stop solidifying @OHLSteelheads shootout win. pic.twitter.com/PNpJPQE4LE

An 18-year-old from Barrie, Ont., Ingham is playing in his third season with the Steelheads who chose him in the second round of the 2016 OHL Priority Selection.  His personal record this season stands at 22-19-2-1 including one shutout victory playing a league-high 2,617 minutes.  His goals-against-average of 3.23 and save percentage of .896 in 44 appearances are improvements over the 3.65 and .880 marks he recorded over 43 games last season.  The sixth round pick of the Kings in the 2018 NHL Draft is now the fourth goaltender to receive the award this season.

Watch video highlights of Ingham and the Steelheads against the IceDogs, 67’s, and Spitfires.