OHL ‘On the Run’ Player of the Week: Justin Brazeau 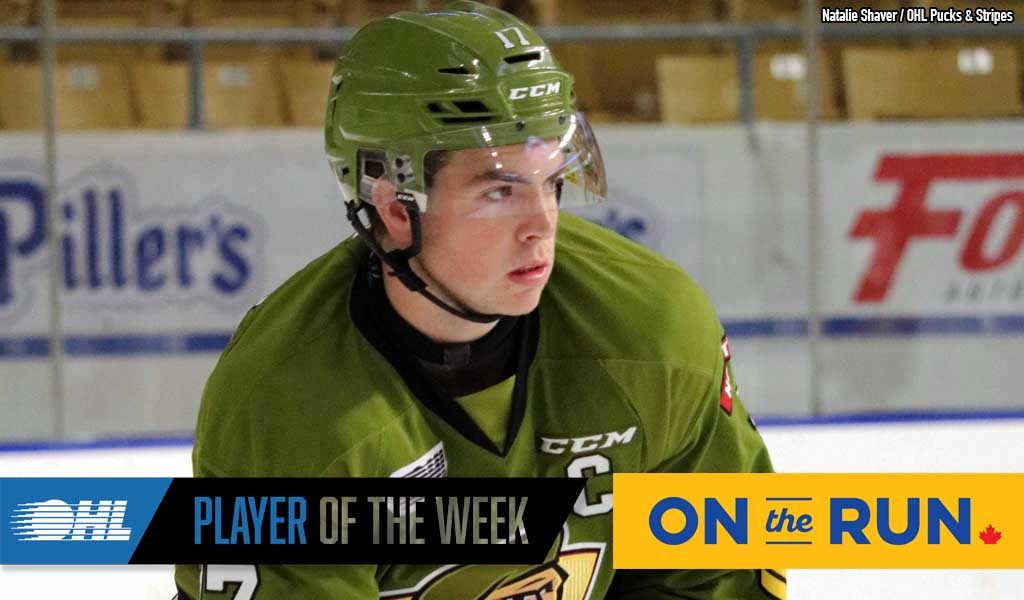 Toronto, ON – The Ontario Hockey League today announced that North Bay Battalion captain Justin Brazeau is the OHL ‘On the Run’ Player of the Week for the regular season week ending October 21 with nine points in two games scoring four goals and five assists with a plus-minus rating of plus-3.

Brazeau took over sole possession of the OHL’s scoring lead on Sunday while tying a Battalion single-game record with a seven point performance.  He scored his second hat-trick of the season accounting for the club’s first three goals in 11:31 of the first period then added four assists to earn first star honours in an 8-3 win over the Kingston Frontenacs.  The seven points equals franchise great Wojtek Wolski who had four goals and three assists in a 9-4 decision over the Erie Otters in Brampton on January 22, 2006.  Brazeau also scored once with an assist on Thursday as second star of a 4-3 loss to the Mississauga Steelheads in the Troops’ annual Pink in the Rink game.

A first period 🎩🎩🎩 paves the way for an impressive 7️⃣ point afternoon to lead @OHLBattalion. pic.twitter.com/rpvySkXQyb

A 20-year-old from New Liskeard, Ont., Brazeau is playing in his fourth season with the Battalion who chose him in the 13th round of the 2014 OHL Priority Selection.  So far this season he’s scored 12 goals and 13 assists for 25 points in 12 games to reach the 150 career point milestone which ranks 15th on the club’s all-time list.  In September the overage forward was appointed the club’s fifth captain in their North Bay tenure after leading the OHL pre-season in scoring.  Brazeau attended San Jose Sharks Training Camp as a Free Agent invite.

Watch video highlights of Brazeau and the Battalion against the Steelheads and Frontenacs.

Also considered for the award this week were a trio of players with nine points in three games led by Kevin Hancock of the Owen Sound Attack who scored five goals and four assists, plus a pair of Philadelphia Flyers prospects including Morgan Frost of the Sault Ste. Marie Greyhounds and Matthew Strome of the Hamilton Bulldogs both recording three goals and six assists.  In goal, Boston Bruins prospect Kyle Keyser posted a 3-0-0-0 record between-the-pipes for the Oshawa Generals making 88 saves for a goals-against-average of 1.33 and save percentage of .957.