OHL ‘On the Run’ Player of the Week: Liam Foudy 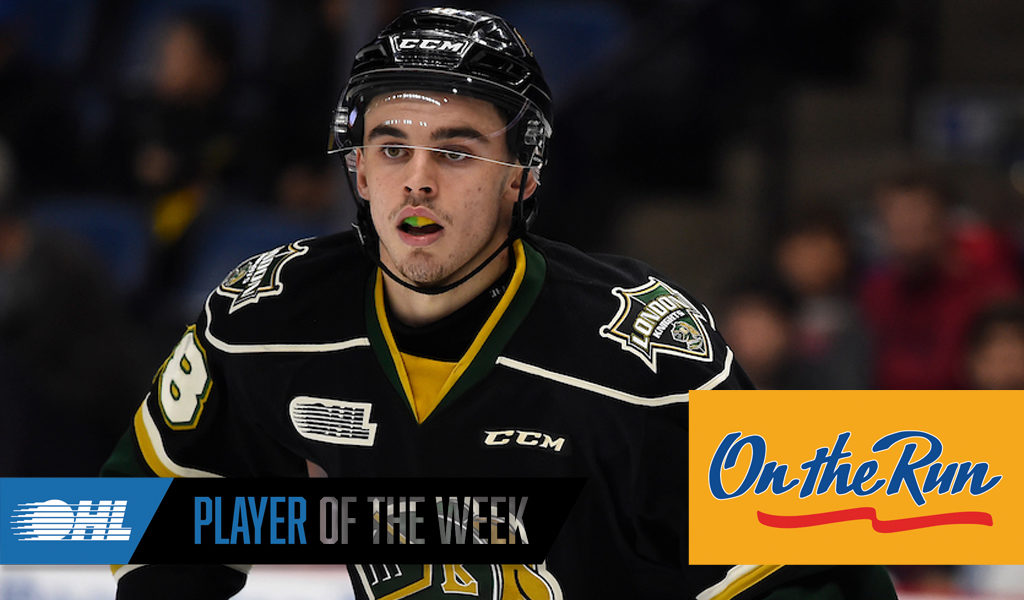 Toronto, ON – The Ontario Hockey League today announced that NHL Draft prospect Liam Foudy of the London Knights is the OHL ‘On the Run’ Player of the Week for the week ending February 11 after scoring five goals and two assists for seven points in three games with a plus-minus rating of plus-9.

Foudy produced a trio of multi-point performances that helped the Knights win three straight games to maintain their hold on fourth place in the Western Conference standings with a 29-20-2-2 record.  On Friday night he delivered a career-high three points with two goals and an assist as third star of a 4-1 win over the Erie Otters, then on Saturday scored a goal with an assist as second star of a 5-3 win over the Sudbury Wolves.  His week wrapped up Sunday in Guelph with two goals including the overtime winner earning first star honours in a 3-2 triumph over the fifth place Storm.

A native of Scarborough, Ont., Foudy celebrated his 18th birthday on February 4.  He’s playing in his second season with the Knights after being chosen by the club in the first round of the 2016 OHL Priority Selection.  In 50 games this season Foudy has scored 15 goals and nine assists for 24 points however has been particularly hot as of late with 11 goals in 14 games since January 5.  He is eligible for the 2018 NHL Draft listed 91st among North American skaters by NHL Central Scouting and recently competed in the 2018 Sherwin-Williams CHL/NHL Top Prospects Game for Team Orr where he performed among the top five in both on and off-ice skills testing.

Watch video highlights of Foudy and the Knights against the Otters, Wolves, and Storm.

Also considered for the award this week were a pair of overage forwards including Nikita Korostelev of the Peterborough Petes with three goals and five assists for eight points in three games, and Ethan Szypula of the Owen Sound Attack with five goals and two assists for seven points in three games.  In goal, overager Mario Culina of the Kitchener Rangers went 2-0-0-0 making 81 saves for a goals-against-average of 2.00 and save percentage of .953.