OHL ‘On the Run’ Player of the Week: Lucas Chiodo 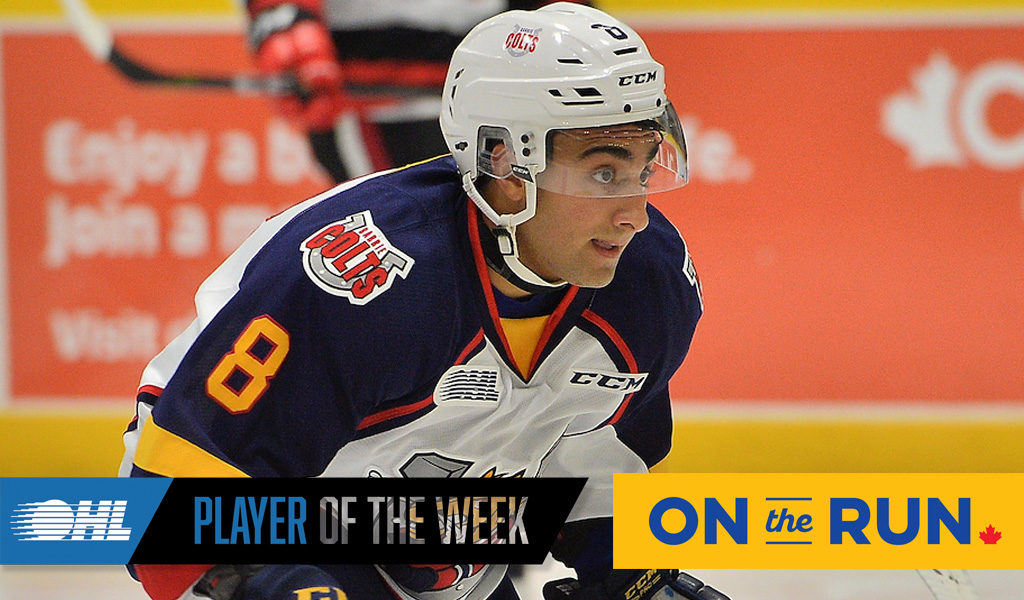 Toronto, ON – The Ontario Hockey League today announced that Lucas Chiodo of the Barrie Colts is the OHL ‘On the Run’ Player of the Week for the regular season week ending September 30 after recording seven points in two games including three goals and four assists with a plus-minus rating of plus-6.

Chiodo produced a pair of multi-point performances for the Colts who earned three of a possible four points last week in a home-and-home series against the Sudbury Wolves.  He tallied his first career hat-trick and added two assists to match a career-high five points on Thursday night earning first star honours in a 10-3 victory.  He also contributed assists on both Colts goals on Sunday afternoon despite a 3-2 overtime loss in Sudbury.  The chemistry between Chiodo and teammate Ryan Suzuki was on point in both games as the pair combined for six goals and eight assists.  All three of Chiodo’s assists were on Suzuki tallies helping the 2019 NHL Draft prospect overtake the OHL’s scoring lead with 11 points in four games.

It’s a trio of beauties by the overage forward for his first career 🎩🎩🎩 with @OHLBarrieColts 🐴 pic.twitter.com/n0D8SRo6HX

A soon-to-be 20-year-old from Churchill, Ont., Chiodo is playing in his fourth full season with the Colts after being chosen in the 15th round of the 2014 OHL Priority Selection.  The overage forward has eight points through four games this season bringing his career total to 150 points including 57 goals and 150 assists in 192 games.

Watch video highlights of Chiodo and the Colts against the Wolves.

In addition to Suzuki, other award consideration went to a pair of Florida Panthers prospects including Serron Noel of the Oshawa Generals and Owen Tippett of the Mississauga Steelheads.  Noel scored five goals and one assist for six points in three games while Tippett made the most of his return to the league with a hat-trick and two assists across his two game debut.  In goal, Luke Richardson of the undefeated Kitchener Rangers posted a 2-0-0-0 record making 64 saves for a goals-against-average of 1.00 and save percentage of .970.