OHL ‘On the Run’ Player of the Week: Mack Guzda 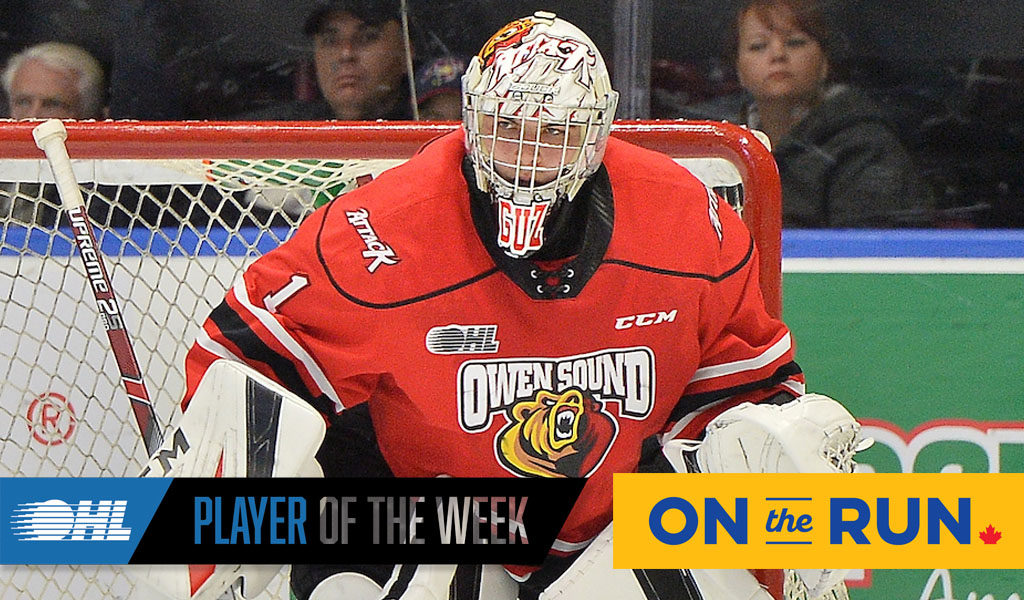 Toronto, Ont. – The Ontario Hockey League today announced that goaltender Mack Guzda of the Owen Sound Attack is the OHL ‘On the Run’ Player of the Week for the week of regular season action ending October 13 with a 3-0 record, 2.59 goals-against average and .927 save percentage.

Guzda becomes the first goaltender to receive the honour this season, guiding the Attack to three wins in a span of four days. The 6-foot-5, 210Ib netminder turned aside 26 shots and stopped five of six shootout opponents in Wednesday’s 4-3 shootout win over visiting Kitchener. He followed that effort up with a career-high 47-save showing on Friday night in London, helping the heavily outshot Attack get past the Knights 5-4 in overtime, earning third star honours in the process. Guzda was the first star of Saturday’s 4-1 win over the visiting Soo Greyhounds, making 28 saves as the Attack were outshot once again.

An 18-year-old from Knoxville, Tenn., Guzda has embarked on his third season in Owen Sound after originally being the club’s second round (31st overall) pick in the 2017 OHL Priority Selection. He’s played to a 5-2-0-1 record to go with a 2.94 goals-against average and .906 save percentage with one shutout through eight games this season. He owns a career OHL regular season record of 39-27-6-4 with a 3.42 goals-against average and .881 save percentage over 87 contests. After going undrafted in 2019, Guzda is eligible for the 2020 NHL Draft.

Also considered for the award this week was Peterborough Petes defenceman Declan Chisholm. The Winnipeg Jets prospect recorded a goal and four assists over three road games as the Petes played to a 2-1 record. Guzda’s Attack teammate Barret Kirwin was also in the running after putting up five points (3-2–5) along with a plus-6 rating over three victories, scoring the overtime winner in Friday’s victory over London.

flint firebirds player of the week
OHL 'On the Run' Player of the Week: Tyler Tucker
19 hours ago