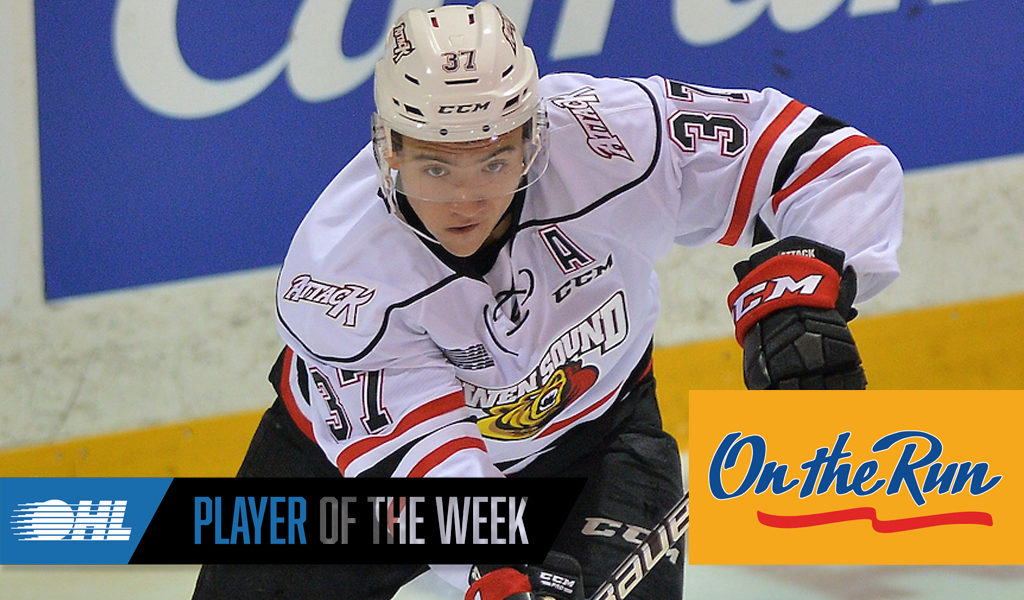 Toronto, ON – The Ontario Hockey League today announced that Vegas Golden Knights prospect Nick Suzuki of the Owen Sound Attack is the OHL ‘On the Run’ Player of the Week for the week ending October 8 with seven points in two games including three goals and four assists with a plus-minus rating of plus-3.

Suzuki recorded a pair of multi-point performances last week helping the Attack earn three of a possible four points.  On Wednesday night he scored two goals plus an assist and was named first star despite a 6-5 shootout loss to the Sarnia Sting, then scored once with three assists on Saturday as second star of a 9-2 win over the Windsor Spitfires.  Suzuki now has 10 points in five games as the Attack remain the league’s only team without a regulation loss carrying a record of 3-0-0-2 heading into a Thanksgiving Monday matchup against the Kitchener Rangers.

An 18-year-old from London, Ont., Suzuki is playing in his third OHL season with the Attack who chose him 14th overall in the 2015 OHL Priority Selection.  In 2016-17 he finished fifth in league scoring with 45 goals and 51 assists for 96 points in 65 games helping Owen Sound to their best season in franchise history with 49 wins and 102 points.  He was voted the OHL’s Most Sportsmanlike Player of the Year and was later recognized at the national level earning CHL Sportsman of the Year honours.  Suzuki was selected 13th overall by Vegas in the 2017 NHL Draft.

What a way to open the scoring ?

Watch video highlights of Suzuki and the Attack against the Sting and the Spitfires.

Also considered for the award this week was Calgary Flames prospect Adam Ruzicka of the Sarnia Sting with four goals and one assist for five points in two games, and 2018 NHL Draft top prospect Andrei Svechnikov of the Barrie Colts with five goals in three games.  In goal, Edmonton Oilers prospect Dylan Wells of the Peterborough Petes posted a 1-0-0-1 record with 84 saves for a goals-against-average of 1.92 and save percentage of .955.