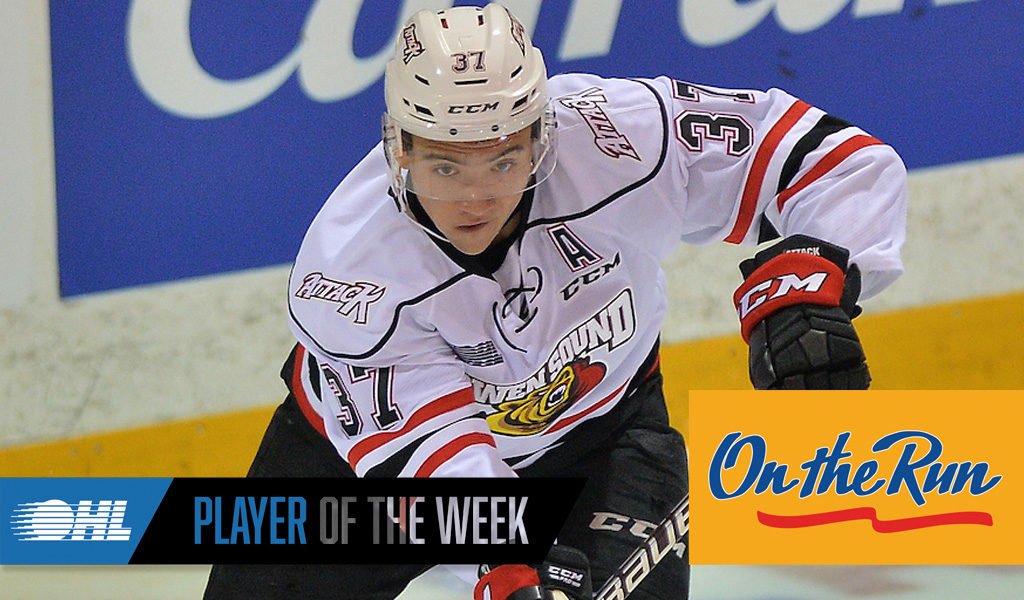 Toronto, ON – The Ontario Hockey League today announced that Vegas Golden Knights prospect Nick Suzuki of the Owen Sound Attack is the OHL ‘On the Run’ Player of the Week for the final week of regular season action ending March 18 after scoring six goals and one assist for seven points in three games with a plus-minus rating of plus-5.

Suzuki extended his point-streak to eight and reached the century mark in season points while helping the Attack win three games last week securing fourth overall in the Western Conference standings with a 38-22-3-5 record.  On Wednesday night Suzuki picked up an assist in a 7-1 road win over the Flint Firebirds, then earned first star honours on Thursday with his third hat-trick of the season contributing to a 9-2 road win over the Windsor Spitfires.  Back home on Saturday, Suzuki wrapped up his season in style with two goals and one assist in a 9-4 victory against the Sarnia Sting becoming the Attack’s first 100-point scorer since Bobby Ryan in 2006-07.  The week included an impressive 25 goals scored by the Attack who are among the league’s hottest teams with six wins and an overtime loss in their last seven as they prepare for a first round playoff series matchup with the London Knights beginning Friday at home.

An 18-year-old from London, Ont., Suzuki is playing in his third season in Owen Sound since he was a first round choice by the Attack in the 2015 OHL Priority Selection.  His 100 points in 64 games were fourth best in the league this season and represent a new career-high.  This marks the second straight season Suzuki has hit the 40-goal plateau finishing with 42 after scoring 45 in 2016-17.  After three full seasons with the Attack, Suzuki has 107 career goals and 127 assists for 234 points in 192 games.  The first round pick of the Golden Knights in the 2017 NHL Draft also earned the league’s weekly honour for his play to start October.

Watch video highlights of Suzuki and the Attack against the Firebirds, Spitfires, and Sting.

Also considered for the award this week were Tye Felhaber of the Ottawa 67’s with three goals and five assists for eight points in three games, and Lucas Chiodo of the Barrie Colts with two goals and six assists for eight points in three games.  In goal, Stephen Dhillon helped the Niagara IceDogs finish the season with seven straight wins posting a 2-0-0-0 record while making 72 saves for a goals-against-average of 2.45 and save percentage of .935.