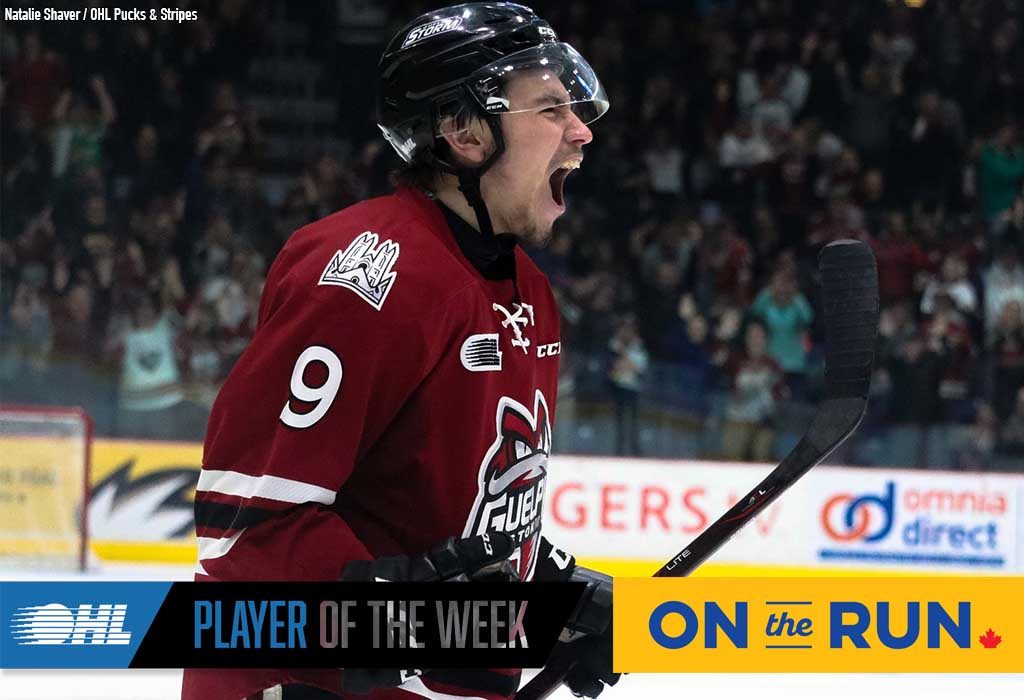 Toronto, ON – The Ontario Hockey League today announced that Montreal Canadiens prospect Nick Suzuki of the Guelph Storm is the OHL ‘On the Run’ Player of the Week for the final week of playoff action ending May 12 with 10 points in four games scoring twice with eight assists and a plus-minus rating of plus-8.

Suzuki cemented his post-season MVP status with points in four straight Storm victories last week to receive the Wayne Gretzky ‘99’ Award following Guelph’s fourth Robertson Cup title defeating the Ottawa 67’s in the 2019 Rogers OHL Championship Series.  The top scorer in the 2019 OHL Playoffs had a trio of three-point outings for the Storm who erased a 2-0 series deficit for a record third straight time.  On home ice for Game 3 last Monday night, Suzuki contributed three assists in the 7-2 victory, then scored once with two assists in Game 4 on Wednesday earning first star honours in the 5-4 win.  Back in Ottawa for Game 5 on Friday, Suzuki chipped in one assist in the 4-3 decision, then wrapped up his post-season with a goal and two assists in Sunday’s Game 6 finale on home ice earning third star honours in the 8-3 outcome.  The 2019 Storm add a championship banner alongside Robertson Cup titles in 1998, 2004, and 2014, and will represent the OHL in the 2019 Memorial Cup Presented by Kia which opens Friday night in Halifax.

A 19-year-old from London, Ont., Suzuki finished the OHL Playoffs with a Storm franchise record 42 points including 16 goals and 26 assists over 24 games.  11 of those points came over six games in the Rogers OHL Championship Series.  The former first round pick of the Vegas Golden Knights in the 2017 NHL Draft was a midseason acquisition from the Owen Sound Attack and collected 49 points in his final 29 games in crimson.  His impressive four-year OHL career includes 328 points in just 251 games with a record three-straight Most Sportsmanlike Player of the Year awards.  He became the Storm’s third player to receive Playoff MVP honours following Robby Fabbri in 2014 and Martin St. Pierre in 2004.