OHL ‘On the Run’ Player of the Week: Riley McCourt 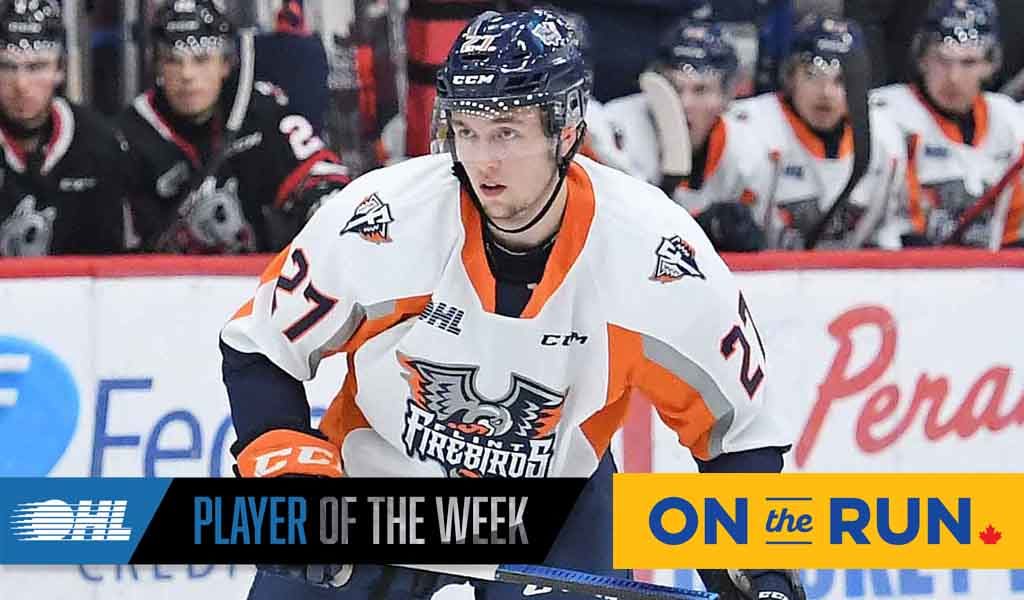 Toronto, Ont. – The Ontario Hockey League today announced that fourth-year defenceman Riley McCourt of the Flint Firebirds is the OHL ‘On the Run’ Player of the Week with eight points including three goals and five assists over three games.

McCourt becomes the first defenceman to win the award this season after recording points in all three of his outings last week, helping the Firebirds go 2-1 to remain in the thick of things in a highly competitive Western Conference. He was a bright spot for the Firebirds in a Wednesday night 6-4 road loss to the Sarnia Sting, recording a career-high four assists as Flint scored three power play markers. McCourt earned first star honours in Friday’s 4-3 win over the visiting Soo Greyhounds, finishing with two goals and an assist including the game winning goal before scoring another game winner in Saturday’s 5-4 triumph over visiting Owen Sound. McCourt racked up 10 shots on goal in Saturday’s win for a total of 21 over his three performances last week.

A 19-year-old native of St. Catharines, Ont., McCourt sits tied for fifth in scoring among OHL blueliners with 24 points (9-15–24) over 23 contests this season. His 86 shots on goal are second among the league’s defencemen. The 5-foot-11, 173Ib. left-shot rearguard has put up 79 points (21-58–79) over 135 career OHL regular season games between Flint and Hamilton dating back to the 2016-17 season. He was Hamilton’s third round (45th overall) pick in the 2016 OHL Priority Selection from the Niagara North Stars Minor Midgets. McCourt attended rookie camp with the Boston Bruins this past September.

Also considered for the award this week OHL scoring co-leader Connor McMichael of the London Knights who joined McCourt with eight points (3-5–8) last week. Knights goaltender Dylan Myskiw was also in the running after going 2-0 with a 1.00 goals-against average, .966 save percentage and one shutout in a pair of road wins.