OHL ‘On the Run’ Player of the Week: Serron Noel 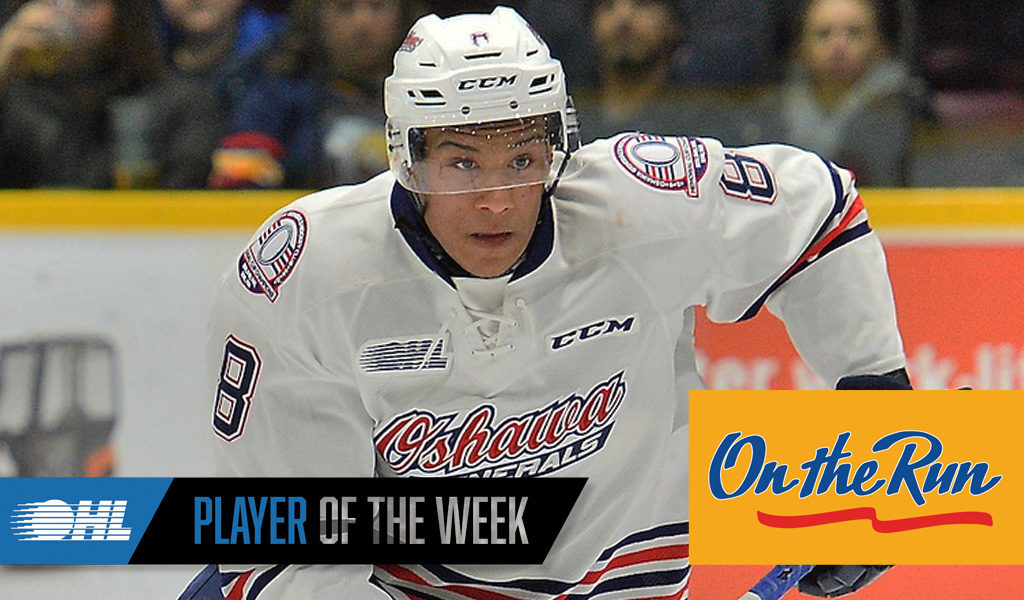 Toronto, ON – The Ontario Hockey League today announced that 2018 NHL Draft prospect Serron Noel of the Oshawa Generals is the OHL ‘On the Run’ Player of the Week for the week ending November 26 after scoring four goals and four assists for eight points in three games with a plus-minus rating of plus-5.

Noel recorded three-straight multi-point performances for the first time in his career last week as the Generals wrapped up a tough November schedule with two-straight victories to maintain seventh place in the Eastern Conference standings.  Noel’s week began on Friday night scoring two goals including one by penalty shot and adding one assist despite a 6-5 loss to the Hamilton Bulldogs.  On the winning side, Noel earned first star honours Saturday with a goal and two assists in a 7-3 road victory over the Barrie Colts, then wrapped up the three-in-three Sunday with a goal and an assist as second star of a 6-0 shutout against the Mississauga Steelheads.

A 17-year-old from Ottawa, Ont., Noel is playing in his second season with the Generals who chose him in the second round of the 2016 OHL Priority Selection.  The sophomore forward now has 14 goals and 22 points in 22 games this season surpassing his rookie total of 21 points produced in 63 games played in 2016-17.  Noel captured gold as a member of Canada’s National Men’s Summer Under-18 Team at August’s Ivan Hlinka Memorial, and was one of eight OHL skaters assigned an ‘A’ rating by NHL Central Scouting in their November ‘Players to Watch’ list for the 2018 NHL Draft.

Just a taste of what #OHL Player of the Week @serron_noel did for @Oshawa_Generals. pic.twitter.com/Zy6hM3Qoan

Watch video highlights of Noel and the Generals against the Bulldogs, Colts, and Steelheads.

Also considered for the award this week was fellow NHL Draft prospect Nathan Dunkley of the Kingston Frontenacs with two goals and six assists for eight points in three games, and Philadelphia Flyers prospect Morgan Frost of the Sault Ste. Marie Greyhounds with a goal and seven assists for eight points in three games.  In goal, Edmonton Oilers prospect Dylan Wells of the Peterborough Petes posted a 2-0-0-0 record including a shutout victory making 59 saves for a goals-against-average of 0.96 and save percentage of .967.