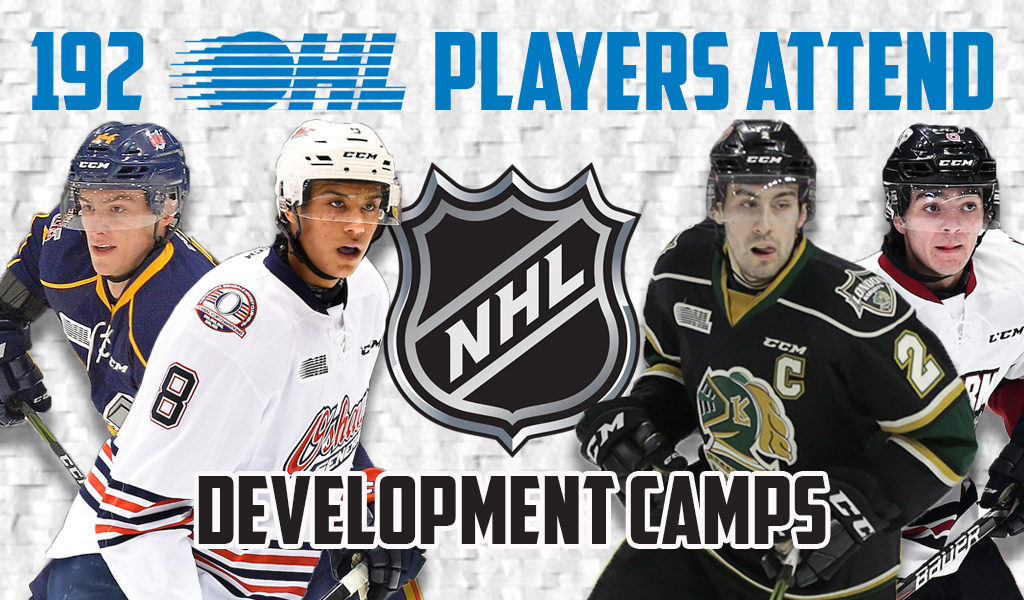 192 past and present OHL players received invitations to NHL Development Camps across the continent this past month.

A total of 133 past or present OHL players that were either drafted or signed joined 59 free agent invitees in attending the camps, many of which included comprehensive on and off-ice elements in the local community as players got a feel for their new surroundings.

For the second straight year the Toronto Maple Leafs led the way with 17 OHL representatives attending camp while the Los Angeles Kings (12), Arizona Coyotes (11), Dallas Stars (10) and Vancouver Canucks (10) had totals in the double-digits.

All 20 OHL clubs featured past graduates and present players in attendance at camps with the Sault Ste. Marie Greyhounds leading the way with 17 followed by the London Knights with 14, the Hamilton Bulldogs, Owen Sound Attack and Sarnia Sting each with 13 as well as the Ottawa 67’s with 12.

Three current OHLers including MacKenzie Entwistle (Hamilton Bulldogs), Michael Little (Mississauga Steelheads) and Christian Purboo (North Bay Battalion) attended multiple camps. Entwistle attended camp with the Arizona Coyotes before being dealt to the Chicago Blackhawks where he would also participate in mid-July. Little attended camp with both the Nashville Predators and Calgary Flames while Purboo was in camp with both the Los Angeles Kings and Vancouver Canucks.

There was at least one OHL player or graduate present at Development Camps for each of the NHL’s 31 member teams.

Here’s a look at some of the new experiences OHL players and graduates had this past month:

Thanks for having us, Phoenix Day! pic.twitter.com/rei1WZse2Y

“I just want to keep on getting faster and become the fastest player I can possibly be.” — Second-round draft pick Kevin Bahl https://t.co/4MmzYltJ26

“It’s really just the tip of the iceberg, getting drafted. I feel it’s just the start of an opportunity to achieve your real dream.” – Barrett Hayton

🎥Goalie Kyle Keyser talks about growing up in Florida and learning the game of hockey in the Sunshine State 🌴☀️🏒: pic.twitter.com/hfuOCW77Hu

🎥@JStudnicka23 has some big goals for the 2018-19 season: “I’m going in with the mentality that I want to make the big club.”#BruinsDevCamp | @ATT pic.twitter.com/IKPTwL0d5V

📝@JStudnicka23 is looking to turn some heads in his second year at Bruins Development Camp: https://t.co/TkPyrRWiMG

What else is in store at #CBJ Dev Camp?https://t.co/Rbfm73zece

Originally drafted 38th overall by the Panthers in 2016, Adam Mascherin’s story is an interesting one. The left wing with a lethal shot is ready to turn pro with the @TexasStars. https://t.co/PQUyBjLehW

“The effort you put in here is going to decide how quick you make it to the NHL.” Jim Nill speaks to Dallas Stars prospects on the first day of Development Camp. pic.twitter.com/bLLXy4uKCR

With an already booming point shot & instinctual passing abilities, @EvanBouchard02 is looking to hone his skating at his first #Oilers Development Camp. https://t.co/22OJ6d3gZf

“He has elite hands & an elite shot… I’d put him in the top-five of our prospect list.” Forward Kirill Maksimov’s 2017-18 season with the @OHLIceDogs turned some heads within #Oilers Player Development. https://t.co/ljcWJ908yN

Speed was a virtue when the #Oilers selected @ryan10mcleod 40th overall at the 2018 #NHLDraft & the forward’s wheels were running full steam at Development Camp this week. https://t.co/xBNy66zxF5

“He’s a great friend of mine & I’m just looking forward to it a lot.” #Oilers picks @ryan10mcleod & @EvanBouchard02 will go from @OHLHockey foes to camp compadres thanks to this weekend’s #NHLDraft. https://t.co/WgzfcOEKJW

“Putting on the jersey for the first practice was really cool.” Newly-drafted @EvanBouchard02 talks about his first day at #Oilers Development Camp pic.twitter.com/I8LifInKvR

“I’m just going to take in everything I can & talk to as many people as I can.” #Oilers 40th overall selection at the 2018 #NHLDraft @ryan10mcleod on attending his first Development Camp pic.twitter.com/BV9xfllu8e

Next goalie shuttle comes by in 5, Dylan. 🚌 pic.twitter.com/LbIARemEys

“Always come back willing to get better and willing to give it your all every year.” –@mitchv_97

The rookies are back at it on the second day of #IslesMiniCamp: pic.twitter.com/DPZZWex73C

Take me out to the ballgame! ⚾️#Isles rookies trading in hockey for baseball at tonight’s @Mets game! 🔷🔶🔷🔶🔷 pic.twitter.com/Uy7m37Y1br

Which @NYIslanders prospect takes home the 🏁 on night two of #IslesMiniCamp? pic.twitter.com/qhrFVuoWYW

Our rookies are getting a little taste of Long Island today! ☀️🌊🌴 #IslesMiniCamp pic.twitter.com/Ux9uIgNegs

“Couldn’t have asked for a better spot than New York.” — 2018 #NYR draft pick Joey Keane talks about when he heard he’d be coming to New York and what type of defenseman he is at #NYRPDC. pic.twitter.com/NyJSyShc71

“You improve little things and it starts to add up. It’s the small details that make you a better player and it really makes a difference…” – @SeanDurzi#LeafsDevCamp | #TMLtalk pic.twitter.com/G5DMrfx5Cw

“Being from Toronto, it’s been a dream of mine since I was a kid to put this on.”

After hitting the ice on Day 2 of the 2018 @MapleLeafs Development Camp, @Rasmussandin talks to the media. #TMLtalk pic.twitter.com/DJs0OhQl4X

“Every time you come here you have to work as hard as you can…We’re working on little things out there, so you try to get better at that, and help the younger guys out.”

Logan Stanley chats about his third development camp, and the importance of the off-ice component this week. pic.twitter.com/O93YuS9kyo

“Serron and I were close. I sort of took him under my wing his first year… When I saw his name get drafted with Florida, I was ecstatic.” -Riley Stillman on his friendship with Serron Noel pic.twitter.com/TcgpoIYQHe

“It’s a big jump, but it’s an exciting time in my career.” -Jonathan Ang on turning pro pic.twitter.com/XLGEnxMIb5

“It’s great to get experience… it’s a goal of mine to crack the line up this year.” -Owen Tippet on Development Camp pic.twitter.com/c1F9SlWoxQ

“I want to keep getting better, keep improving and be someone that kids can look up to.” -Serron Noel pic.twitter.com/zaEQCo8KBT

“I just told Brady ‘Be yourself and have fun’ and if he does that, he’ll be good.”

Logan Brown gave advice to some of the rookies at #SensDevCamp before tonight’s scrimmage. pic.twitter.com/HFfdGdo4zU

“Every camp like this & being in the gym every day is one step closer.”

Alex Formenton talks about how #SensDevCamp helps prepare him for the NHL. pic.twitter.com/Af0Jy817N3

Watch what happens when Robert Thomas and Jordan Kyrou square off in NHL 18. #stlblues https://t.co/iqcRBky92q

“The first time I came in, I was just so shocked and I was really nervous. Coming into my third camp, I’m trying to help guys to come in and be confident. It’s good to be with all the guys here and have a good time.”

Kicking off this year’s #BoltsDevCamp at the Simmons Family @bgctampa in Riverview with a little street hockey! 🏒 pic.twitter.com/uAi4sF4dC1

The boys are serving more than 1000 meals to those less fortunate today with Catholic Charities of Southern Nevada 👏 pic.twitter.com/Amalpz77Pk

https://t.co/kYf12OMDmp asked 2018 Capitals Draft Pick @kody_clark99 to keep a running diary from his time in Washington, D.C. during 2018 #CapsDevCamp. Learn what it’s like to be a Capitals Prospect! #ALLCAPShttps://t.co/f1cu6ik7py

Get to know the Caps’ 2nd round pick in the 2018 NHL Entry Draft, Forward Kody Clark #ALLCAPS pic.twitter.com/dxyivhzLCp

I’d like to thank our fans for their great support all week @BuffaloSabres 2018 Development Camp! #FrenchConnectionTournament pic.twitter.com/llyAhGtPBA

On the third day of #CanesProspects Development Camp, the Hurricanes hit the ice for a morning practice before heading to a football field for a workout and Epic Games HQ for a team-building Fortnite event. https://t.co/ZL7pc3VGtT

The #CanesProspects headed next door to get a workout in. 🏃 pic.twitter.com/RoQC7OctjD

And the winner of the 3-on-3 tournament is…Team Murray!

Special thanks to all the #Pens prospects for joining us at this year’s development camp. pic.twitter.com/DWDUwlTfh6

Prospects show determination and skill on the final night of development camp. Read more about tonight’s 3-on-3 tournament: https://t.co/yl3IsWN6Ak pic.twitter.com/EhbHWdM2xi

Brandon Saigeon was in his third year of #NHLDraft eligibility this year, but he’s only gotten better.#GoAvsGo https://t.co/yj514BGgD9

Wait a second, that’s no reporter…

Development Camp Day 3: Frost, Strome and others from 2017 Draft Class share their experience in Camp No. 2https://t.co/thSUH08wPn

Thanks @Eagles for hosting our prospects at the NovaCare Complex to kick off 2018 Development Camp today! The #Flyers prospects played some flag football and took a behind the scenes tour. #BrotherlyLove #FlyEaglesFly pic.twitter.com/lnxIftkLvM

Earlier today, #Flames prospects went through a different type of off-ice training, running through the obstacle course at the @CalgaryPolice training facility! pic.twitter.com/oelQ332AD9

Working for the weekend. pic.twitter.com/JlSu9MdUof

Hear from the first round draft pick at his first #SharksDevCamp.https://t.co/bkv4d6m2AP pic.twitter.com/Y2FgbRRLjV

Who had Jacob Middleton for the first goal of the scrimmage? 🙋#SJSharks pic.twitter.com/WLyWQTjnb5

After a week of competitions, @Studa_19 finishes #NJDevCamp at the top of the individual player score card! pic.twitter.com/Q7IIdQe4vn

“I still had all my equipment on and I was kind of nervous when I saw all those missed calls.”

@5twisty5 on a particularly eventful training session in Toronto. https://t.co/9IBzVjArtG

With the #NHLDraft behind him, 8th overall pick @BoqvistAdam is focused on his future in the #Blackhawks organization. pic.twitter.com/5csRBQGi4n