OHL stars ready to take the stage in Buffalo 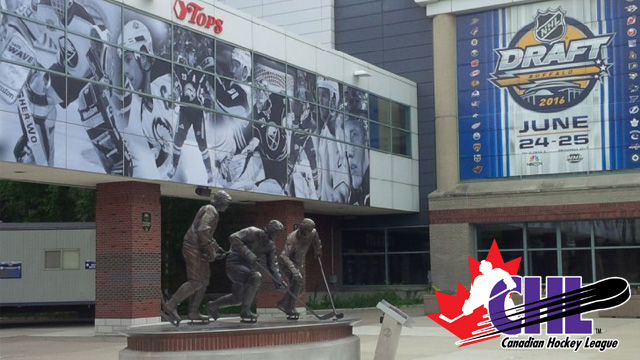 The future of the National Hockey League is ready to take the stage in Buffalo at the 2016 NHL Draft.

Top prospects from around the Canadian Hockey League and beyond will converge at First Niagara Center, home of the Sabres, with the top 30 picks to be announced on Friday night followed by rounds two through seven on Saturday.

It’s an opportunity for all 30 NHL teams to find talent that may one day lead them to a Stanley Cup as hockey fans worldwide get their first look at future stars donning the sweaters of their favourite teams.

“It’s exciting to find out where you’re going to play,” said Matthew Tkachuk at a top prospects media availability on Thursday. “This whole process, especially since the season has been over has been crazy.  It’s now down to the final wire and I’m excited.”

Thursday’s media availability at Buffalo’s Erie Basin Marina brings an end to a busy few days of activities and camaraderie for the players.

“We did batting practice yesterday with the Buffalo Bisons and then watched their game,” added Tkachuk. “This morning we were skating with some local kids with USA Hockey, then went to a local cancer research clinic, did the Maid of the Mist at Niagara Falls, so it’s been a pretty good couple of days.”

Last season 31 OHL players were chosen in the 2015 NHL Draft in Florida led by recently announced NHL All-Rookie Team forward Connor McDavid to the Edmonton Oilers.  The former Erie Otters star became the seventh OHL player in nine years to be chosen first overall and was one of seven OHL players picked in the first round.

With 11 of the top 30 ranked North American prospects from the OHL, Friday’s first round could once again see a considerable amount of talent selected from across the league including several from the blueline.

“You can never really predict these things, but I’m excited,” said top ranked defenceman Jakob Chychrun of the Sarnia Sting. “It’s almost scary in a sense. Obviously there isn’t a bad destination in this league, being taken anywhere will be pretty special. I’m looking forward to spending this moment with my family and friends, it’s kind of a once in a lifetime thing so I’m going to do everything I can just to soak in every minute.”

Enjoying the moment is that much easier when surrounded by teammates that have shared similar experiences throughout the season.

“It’s helped having Day, McLeod, and Bastian all in the locker room going through this all together,” said Mississauga Steelheads forward Alexander Nylander, ranked third by NHL Central Scouting. “Being able to ask each other questions, it’s just a lot of fun going through it with your teammates, and a lot of help too. It’s going to be really exciting to see where they’re going to get picked and where I’m going to get picked.”

The same goes for defenceman Olli Juolevi, ranked at number five, and one of eight Knights listed in Central Scouting’s Final Rankings.

“It’s time to enjoy, it’s just a great thing to come here and see all the guys,” he said. “I haven’t seen (Tkachuk) in a couple of weeks so it was nice to see him again. Of course there’s also Max Jones, Mete, Parsons, and Pu, it’s going to be exciting to see where those guys are going and I hope the best for them.”

Olli Juolevi: Played soccer growing up, like all Europeans. This was fun.. Something different. #NHLDraft pic.twitter.com/HGfjxQXWKV

For the prospects, this weekend marks the pinnacle following a season of OHL competition, development, and anticipation for the moment to finally hear their name called and celebrate a lifelong dream.

“You sit back and really look at the big picture, you’re getting drafted to the NHL,” said Logan Brown of the Windsor Spitfires, ranked seventh by Central Scouting. “It’s what I’ve been working for my whole life and it doesn’t matter if you’re one or 100, you’re that NHL team’s property and it’s an opportunity to play in the NHL one day.”