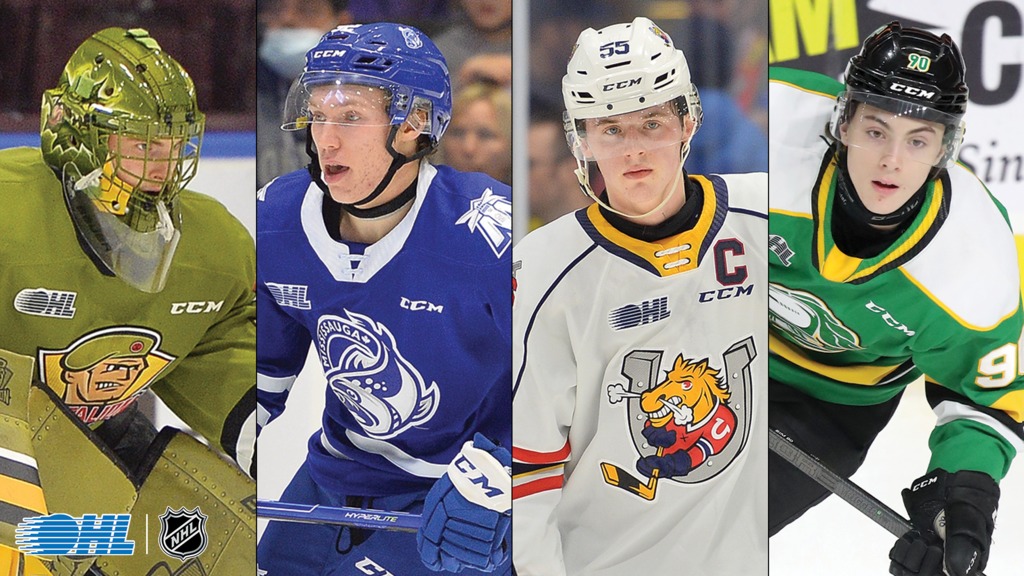 A total of 153 OHL players attended NHL Rookie Camps this past weekend. With seven prospect tournaments taking place across the continent, here is a look at some of the League’s standout performers.

Barrie Colts captain Brandt Clarke played his first games in a Kings jersey and showed LA fans what he’s capable of. The defenceman set up both of the team’s goals in the opening game, including this assist through traffic to Francesco Pinelli:

In his second game, Clarke picked up two more assists and the shootout winner:

After missing last year’s Rookie Camp through illness, Clarke was one of LA’s best players this time around. He was deployed in all situations on the point, playing big minutes and dictating play for the Kings.

The Colorado Avalanche had a trio of players with OHL ties stand out in San Jose. Jean-Luc Foudy, Oskar Olausson, and invitee Brady Stonehouse all had a pair of goals for the reigning Stanley Cup champs.

London Knights forward Antonio Stranges was the standout representative from the OHL in Michigan. The Stars’ 2020 fourth-round pick finished the tournament with five points in three games, including a two-goal, one-assist effort in a 5-4 win over Detroit.

Stranges’ teammate Landon Sim also enjoyed a strong outing in Traverse City, leading St. Louis in scoring. The 2022 sixth-round pick was outstanding in the Blues’ 8-3 win over Toronto, registering a pair of goals and assists.

Flint Firebirds forward Riley Piercey had perhaps the best individual outing in Michigan, lighting the lamp four times in a 5-2 win over Columbus. It was the first four-goal game of his career. The invitee would add another goal against the Maple Leafs and earn an invite to main camp as a result.

… and before we could get this out, he got his fourth of the game. 😱 pic.twitter.com/mdZ8unhkoV

2022 first-round pick Owen Beck impressed in his first Rookie Camp with Montreal, operating as the Canadiens’ top-line pivot and showing off his 200-foot game.

The Mississauga Steelheads star scored in the first two games of the tournament, including this tidy finish while falling:

Beck with a beauty to put the Canadiens in front!

North Bay Batallion goaltender Domenic DiVincentiis built upon a strong OHL rookie campaign with a solid showing on the West Coast. The Jets’ 2022 seventh-round pick stopped 44 of 47 shots in a 5-3 win over the Flames. He will remain out West for the team’s main training camp.

After scoring in his pre-season home debut for Sarnia, Sting winger Sandis Vilmanis scored in his first two games at the Prospect Showcase. Florida’s fifth-round pick in this year’s draft also picked up an assist off this cheeky feed in a 6-1 win over Carolina:

The Latvian forward will join the Panthers’ main camp this week.

Steelheads captain Ethan Del Mastro had a dominant two-way display in Chicago’s 5-0 win over Minnesota. He helped to nullify the Wild’s offence while also stepping up to the net and scoring at the other end:

Lukas Reichel sets up Ethan Del Mastro at the net to put the Blackhawks ahead 2-0 pic.twitter.com/n3GZkDsYCB

Tyson called game. 🚀@tfoerster8 delivers the GWG and lifts the Orange & Black to a 2-1 OT victory.

We’ll wrap up the Rookie Game Series with the Rangers at 5PM on Saturday on @NBCSPhilly+. pic.twitter.com/T04FWu4jL8

The Barrie Colts winger followed up on his impressive performance with another solid outing for the Flyers, setting up a goal in a 5-1 victory.