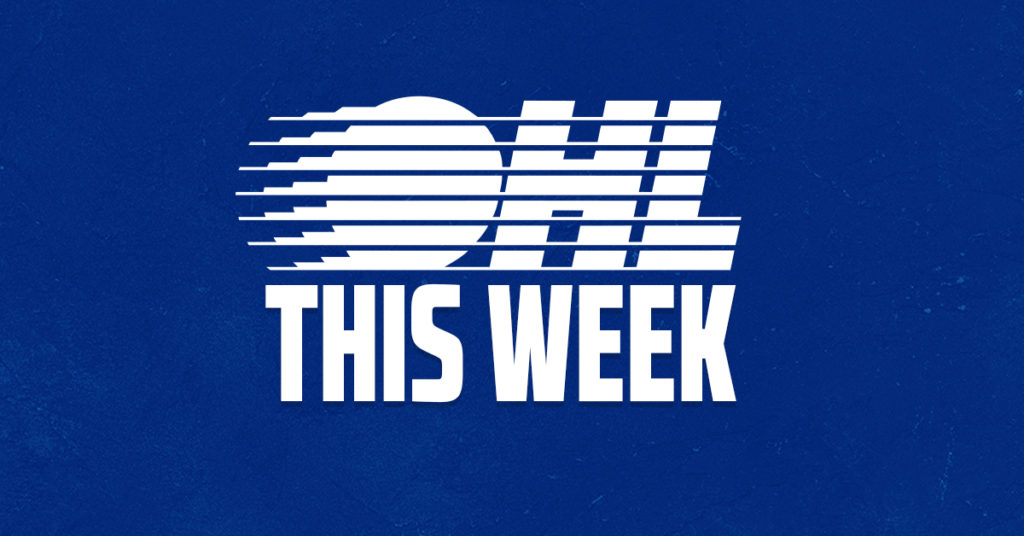 IceDogs name Ryan Kuwabara Head Coach:
The Niagara IceDogs have announced Ryan Kuwabara as the team’s new Head Coach. Kuwabara joins the Niagara IceDogs with professional experience both behind the bench and on the ice. Last season, he served as an Assistant Coach for the Pittsburgh Penguins’ ECHL affiliate, the Wheeling Nailers. Before coaching pro, Kuwabara spent two seasons as an Associate Coach with the Flint Firebirds and two seasons with the Saginaw Spirit as an Assistant Coach. He becomes the League’s first Head Coach of Asian descent. Read More

Petes’ Brian Miller to work 1,500th OHL game on Thursday:
Peterborough Petes Head Trainer & Equipment Manager Brian ‘BMan’ Miller will work his 1,500th career OHL contest on Thursday night when the Petes take on the visiting Flint Firebirds. Miller, who recently worked his 1,300th contest with the Petes organization last week, also worked 200 games at the beginning of his career with the Guelph Storm. He’s been with the Petes since 2002. Read more

IceDogs team up with Women’s Place to end gender-based violence:
The Niagara IceDogs have teamed up with South Niagara Women’s Place to end gender-based violence by participating in their 16 Days of Activism against Gender-based Violence campaign. The initiative was conducted as part of the OHL Onside Program that sees all 20 member teams participate in training and educational workshops to raise awareness of the player’s responsibility to demonstrate respect for women through their actions and words. Read more

Teddy Bear Toss season across the League:
It’s officially Teddy Bear Toss season in the OHL! Don’t miss the Teddy Bear Toss in your city as teams collect stuffed toys to be distributed to charitable organizations in their communities. Fans can let bears fly on Thursday in Peterborough, Kingston on Friday, Windsor on Saturday, followed by the Soo and Mississauga on Sunday. Read more

67’s to host Nutcracker Ball game on Friday:
The Ottawa 67’s are set to host their Nutcracker Ball Night on Friday. The holiday themed night will be filled with activities, including entertainment by Beats by MACE from Ooh Fest and Carivibe before the game.The first 1000 adults at the arena before the game will also get an exclusive invitation to Ottawa’s best Christmas party. Don’t forget your Christmas attire, as we get into the spirit of the holidays. Read more

U SPORTS Report – OHL grads atop the leaderboards:
The U SPORTS Report keeps tabs on former OHL names doing great things in the OUA, AUS and Canada West ranks on the road to the 2023 U SPORTS University Cup. In this week’s edition we take a closer look at AUS scoring leader Liam Hawel of the StFX X-Men and Windsor Lancers netminder Nathan Torchia. Read more

Marner in Maple Leafs’ record books:
London Knights graduate and 2016 Memorial Cup champion Mitch Marner is in good company with fellow Knights alumnus Darryl Sittler along with Eddie Olczyk, extending his point streak to a Toronto Maple Leafs franchise recording-tying 18 games on Wednesday. Marner hit the empty net in the game’s dying moments to keep the streak alive. The 25-year-old has 29 points (8-21–29) in 25 games with the Leafs this season. Marner, who has also been named the NHL’s third star of the month, was selected by Toronto with the fourth overall pick of the 2015 NHL Draft following a 126-point sophomore season in London.

Robertson named NHL’s first star of the month:
Niagara IceDogs graduate Jason Robertson continued his tear across NHL scoresheets in November, earning the League’s first star of the month honour. The Dallas Stars winger became the first player in franchise history to top the NHL in both goals and points in a calendar month, finishing with 15 goals, 11 assists and 26 points in 14 games. A back-to-back 40+ goal scorer as a member of the Kingston Frontenacs, Robertson continues to channel the scoring prowess he showed in the OHL, lighting the lamp 19 times in 23 games with the Stars this season.

Foudy makes NHL debut:
Former Windsor Spitfires forward Jean-Luc Foudy made his NHL debut with the Colorado Avalanche on Tuesday at the age of 20. Foudy saw 12:11 of ice time and recorded three shots on goal as the Avs fell 5-0 in Winnipeg. A native of Scarborough, Ont., Foudy played two OHL seasons in Windsor, recording 92 points (23-69–92) across 122 regular season games with the Spitfires. The 10th overall pick of the 2018 OHL Priority Selection, Foudy was selected in the third round by the Avalanche in the 2020 NHL Draft. Read more

Nurse plays 500th NHL game:
Former Soo Greyhounds blueliner Darnell Nurse played his 500th career NHL contest on Wednesday. The 27-year-old from Hamilton, Ont. was originally selected by the Edmonton Oilers with the seventh overall pick of the 2013 NHL Draft. Nurse was a standout over four seasons in the OHL from 2011-14. He’s amassed 205 points (57-148–205) in his NHL career thus far.