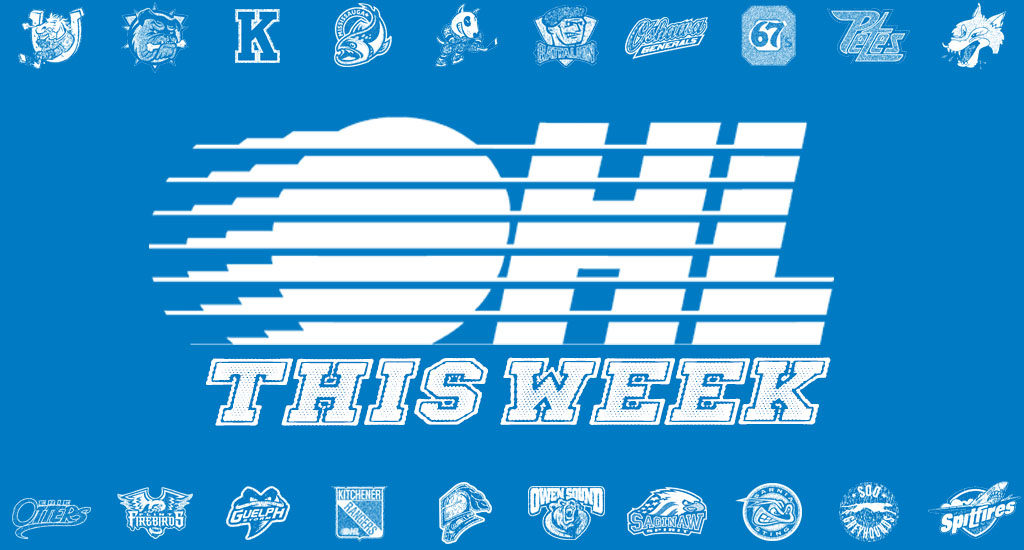 Awards have been handed out and a new schedule has been released! We look ahead to the 2019-20 OHL season and upcoming 2019 NHL Draft in the latest edition of the OHL This Week.

OHL ANNOUNCES 2019-20 REGULAR SEASON SCHEDULE:
The Ontario Hockey League announced Tuesday the regular season schedule of games for 2019-20. The puck drops on Thursday September 19 when the Niagara IceDogs host the Sudbury Wolves in the first of 15 home openers scheduled for #OHLOpeningWeek which includes nine to be played on Friday September 20 highlighted by an OHL championship rematch between the Guelph Storm and the visiting Ottawa 67’s. The OHL continues the tradition of being primarily a weekend league in order to accommodate families and the student athlete with close to 90% (609 games) of the schedule played between Thursday and Sunday. Read more / Dates to Circle / 2019-20 Home Openers

OHL GRADUATES MAKE THE DIFFERENCE AS BLUES WIN FIRST STANLEY CUP TITLE:
11 OHL graduates helped the St. Louis Blues capture their first ever Stanley Cup title with several playing key roles in an unforgettable turnaround season. The Blues pulled off a 4-1 road win over the Boston Bruins in Game 7 of the Stanley Cup Final on Wednesday to win their first title in the franchise’s 52-year existence. Read more

#NHLDRAFT PROSPECTS SHOWCASED AT ONTARIOHOCKEYLEAGUE.COM:
With the 2019 NHL Draft in Vancouver just days away, ontariohockeyleague.com has begun taking a closer look at some of the top eligible names from across the league. Take a closer look at Matvey Guskov, Hunter Jones, Arthur Kaliyev, Vladislav Kolyachonok, Nick Robertson, Michael Vukojevic and several more to come throughout the coming week.

LONG-TIME STORM TRAINER AND EQUIPMENT MANAGER RUSTY HAMMOND ANNOUNCES RETIREMENT:
After more than 2,000 OHL games and a total of 35 years behind the bench, Guelph Storm trainer and equipment manager Russ Hammond has announced his retirement. A part of the Storm organization for the past 25 years, Hammond goes out on top after hoisting the J. Ross Robertson Cup as an OHL champion for the fourth time. Read more

TOP NHL DRAFT PROSPECT EGOR AFANASYEV COMMITS TO SPITFIRES:
The Windsor Spitfires have received a commitment from top 2019 NHL Draft prospect Egor Afanasyev. Originally Ottawa’s sixth-round pick (#106 overall) in the 2017 Ontario Hockey League Priority Selection, Afanasyev’s rights were acquired in the trade that sent franchise cornerstone Michael DiPietro to the 67s back in December. Afanasyev had a productive 2018-19 season with the Muskegon Lumberjacks of the USHL, recording 27 goals and 62 points in 58 regular season games and an additional six points in eight playoff games. Read more

TOP PICK DENI GOURE COMMITS TO ATTACK:
The Owen Sound Attack have received a commitment from 2019 first round (10th overall) selection Deni Goure. The native of Grande Point, ON was the 2019 ALLIANCE Minor Midget Player of the Year, putting up 53 points (22-31–53) over 32 games with the Chatham-Kent Cyclones Minor Midgets. Read more

MARC BOUDREAU COMMITS TO GREYHOUNDS:
The Soo Greyhounds have received a commitment from 2019 third round selection Marc Boudreau. This past season the Toronto native tallied 25 goals and 38 assists for 63 points in 68 regular season games with the Toronto Marlboros Minor Midget AAA hockey club. Read more

MARKO SIKIC COMMITS TO STORM:
The Guelph Storm have received a commitment from 2019 third round selection Marko Sikic. Sikic tallied 19 goals and 30 assists for 49 points in 33 games with the Kitchener Jr. Rangers through the 2018-19 season. The Kitchener native also added three assists in four games played at the OHL Cup. In May, Sikic won bronze with Team ALLIANCE at the OHL Gold Cup in Kitchener recording four points (2G, 2A) in four games. Read more

COOPER WALKER COMMITS TO STORM:
The Guelph Storm have received a commitment from 2018 fifth round selection Cooper Walker. Walker, a five-foot-10, 170-pound forward from Cambridge, ON, was the Storm’s fifth round pick (91st overall) in the 2018 OHL Priority Selection. He spent last season with the Kitchener Dutchmen Jr. B club, recording four goals, 11 assists and 15 points in 47 games. Read more

SAGINAW NATIVE MITCHELL SMITH COMMITS TO SPIRIT:
The Saginaw Spirit have received a commitment from local product and 2018 fifth round selection Mitchell Smith. While starring with Oakland Jr. Grizzles 16U, the Heritage High School sophomore also played on the Hawks Varsity Baseball team.  Smith will now focus on hockey, while continuing to attend the Saginaw Township High School. The 5’10, 170-pound rearguard scored 51 points (17G, 34A) during the 2018-19 season and finished with a +43 plus/minus rating with the Oakland Jr. Grizzles. Read more

MICHAEL SIMPSON COMMITS TO PETES:
The Peterborough Petes have received a commitment from 2019 10th round selection goaltender Michael Simpson. In 16 games with the London Minor Midget Junior Knights last season, Simpson registered a 2.24 goals against average. The 6’1”, 201lbs London native won bronze with Team ALLIANCE at the 2019 OHL Gold Cup and also took part in the 2019 OHL Cup. Read more

OHL CHAMPION STORM BEGIN ROBERTSON CUP TOUR:
The J. Ross Robertson Cup was in London, Ont. this past weekend as Guelph Storm stars Nick Suzuki and Isaac Ratcliffe spent a weekend with the trophy. The stop is the first on a summer-long tour as Storm players will get to spend a day with the trophy in their hometowns. Stay posted to ontariohockeyleague.com for further updates as the summer progresses.

FIREBIRDS ANNOUNCE AFFILIATION WITH LEAMINGTON FLYERS:
The Flint Firebirds announced today that the club has reached an affiliation agreement with the Leamington Flyers of the Greater Ontario Junior Hockey League (GOJHL). With the agreement, the Firebirds will be able to assign affiliated players, draft picks and prospects to play and develop in Leamington. Read more

A LOOK BACK AT A BUSY YEAR OF 67’s COMMUNITY INVOLVEMENT:
The Ottawa 67’s were recently awarded the inaugural OHL Community Involvement Award. Here’s a look back at a few of the many acts the boys did around the city of Ottawa. Read more

Stanley Cup champion Blues bolstered by OHL talent: The St. Louis Blues are Stanley Cup champions for the first time in their 52-year history and the ride was far from ordinary. Wednesday’s 4-1 road win over the Boston Bruins in Game 7 of the Stanley Cup Final capped what is one of the most remarkable turnarounds in NHL history. While several staff members with OHL roots including assistant coaches Steve Ott and Mike Van Ryn played important roles, players developed in the OHL had a significant impact as 11 alumni were part of the club’s playoff roster. Here’s a closer look at the contributions made by OHL products as the St. Louis Blues capped off the 2018-19 NHL season by capturing Stanley Cup glory in Game 7. Read more

Maatta dealt to Blackhawks for Kahun: A pair of OHL graduates headed opposite ways in an NHL trade this past week as former two-time OHL champion Olli Maatta of the London Knights was dealt to the Chicago Blackhawks in exchange for Sudbury Wolves graduate Dominik Kahun and a draft pick. Maatta won a pair of Stanley Cups with the Penguins, recording 14 points over 60 games in this, his sixth season with Pittsburgh. Chicago’s Kahun registered 37 points over 82 games in his first NHL season following four seasons of pro hockey in Germany. Maatta played two seasons in London from 2011-13 before being selected 22nd overall by the Penguins in the 2012 NHL Draft. Kahun was a member of the Wolves over two seasons from 2012-14.

Nash joins Blue Jackets’ front office: After announcing his retirement this past season, London Knights graduate Rick Nash has been named special assistant to general manager Jarmo Kekalainen of the Columbus Blue Jackets. The first ever draft pick in Blue Jackets franchise history, Nash spent nine of his 15 NHL seasons in Columbus after being the 1st overall pick of the 2002 NHL Draft. The 34-year-old Brampton, Ont. native put up 805 points (437-368–805) over his 1060 career NHL regular season games. Nash played for the London Knights from 2000-02, being named the OHL’s Rookie of the Year in 2001.

Daughter of former OHL coach Vince Mallette shares story on Father’s Day: Alyssa Mallette, the daughter of former long-time Ottawa 67’s assistant coach and Peterborough Petes head coach Vince Mallette, shared her appreciation for her father on Father’s Day. Vince Mallette spent several seasons as an assistant coach in the German Elite League (DEL) before being diagnosed with early onset Alzheimer’s disease in 2014 at the age of 52. Writing at alzheimersocietyblog.ca, Alyssa describes her family’s journey through the peaks and valleys of living alongside a loved one with dementia. The Mallette family will host its first annual “Face Off to End Alzheimer’s” charity golf tournament this summer. For the full story, click here.

Brooks receives GTHL’s Herb Ebisuzaki Coaching Award: Oshawa Generals graduate Nathaniel Brooks is the 2019 recipient of the GTHL’s Herb Ebisuzaki Coaching Award. The Markham Islanders and Toronto Young Nationals alumni has been dedicating his time to the Forest Hill Force Minor Hockey organization for the past six seasons. Under Brooks’ leadership, Forest Hill teams had clinched several GTHL championships, most recently clinching a Pro Hockey Life Cup with the Atom “AA” Force. Brooks played 65 games with the Oshawa Generals in the 2005-06 season. For more on the story visit gthlcanada.com.

CHL Leaders: Ex-Colts forward Steven Beyers pursuing master’s in economics: Three seasons in the Ontario Hockey League taught Steven Beyers the importance of time management, a tool he uses today in the classroom. From a 68-game schedule, to regular practice, and completing school work, the ability to keep up with the many demands of a junior hockey player is a life lesson that served Beyers’ well in his later school years, who after three seasons in junior rinks attended Saint Mary’s University. Read more