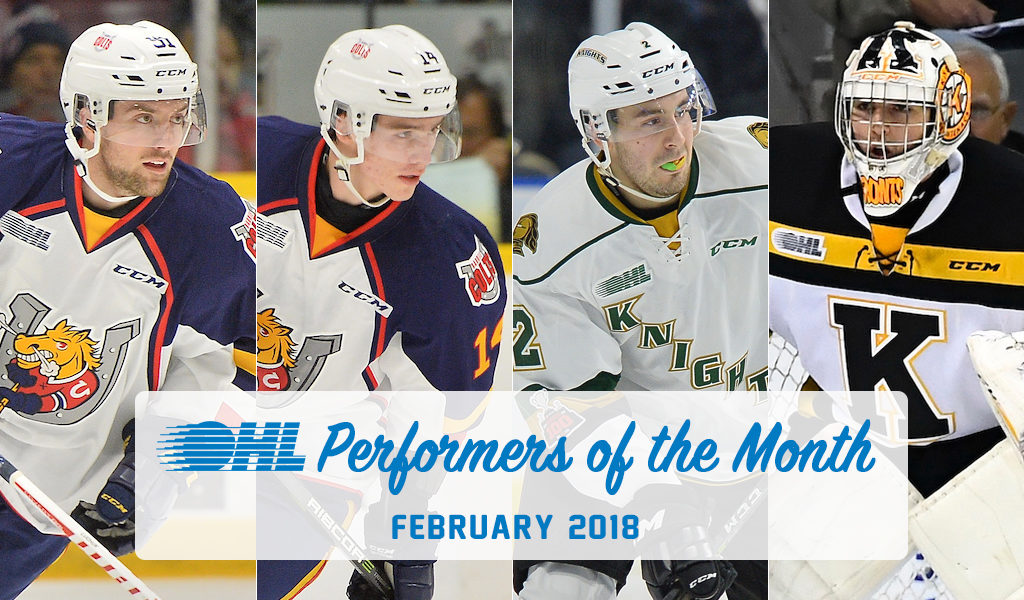 OHL Player of the Month – Aaron Luchuk (Barrie Colts):
Ottawa Senators prospect Aaron Luchuk of the Barrie Colts is the OHL Player of the Month for February, leading all players with 26 points including six goals, 20 assists and a plus/minus rating of plus-9. Luchuk recorded points in all 12 games he played, extending his current point streak to 18 games, two shy of the OHL’s season-high. He earned first star honours on three different occasions, starting in a 6-2 win over his former Windsor Spitfires teammates with a goal and three assists on Feb. 3rd. Luchuk was again named first star in an 8-5 road win over the Flint Firebirds on Feb. 14th, recording a goal and two assists. His top performance of the month came in his return to the WFCU Centre on Feb. 15th as he netted the overtime winner and added three assists in a 5-4 Colts win. Eight of Luchuk’s 12 games featured multi-point outputs as he guided the Central Division-leading Colts to a 9-3-0-0 record in the month of February.

A 20-year-old native of Kingston, Ont., Luchuk sits tied for second in league scoring with 99 points including a league-leading 43 goals and 56 assist in 60 games. He scored the game winner in last spring’s Mastercard Memorial Cup final, leading the Windsor Spitfires to a national championship on home ice. Originally Windsor’s fourth round pick in the 2013 OHL Priority Selection, Luchuk’s strong performance this season earned him an entry level NHL contract with the Ottawa Senators on Dec. 26th.

An 18-year-old native of Oakville, Ont., Bouchard leads OHL defencemen in points (76) and assists (55) along with 21 goals in 58 games. The right-hand shot rearguard has 137 points (34-103–137) over his 169-game OHL career and was an OHL champion and Mastercard Memorial Cup champion with the Knights during his rookie season in 2016. Bouchard was NHL Central Scouting’s fifth-ranked North American skater in January’s Midterm Rankings. He led Team Cherry to victory at the 2018 Sherwin-Williams CHL/NHL Top Prospects Game in Guelph, setting a new event record with four assists to earn MVP honours for his team. Bouchard was London’s first round pick in the 2015 OHL Priority Selection from the Oakville Rangers Minor Midgets.

OHL Rookie of the Month – Andrei Svechnikov (Barrie Colts):
For the third time this season, draft eligible forward Andrei Svechnikov of the Barrie Colts is the OHL Rookie of the Month after leading all first-year players with 17 points including eight goals and nine assists. Svechnikov had points in all nine games he played, extending his current point streak to 15 contests. The Russian winger had six different multi-point performances, helping the Colts earn an honourable mention in the CHL Top 10 Rankings to close out the month. He recorded his third hat-trick of the season on Feb. 3rd, helping the Colts defeat the Windsor Spitfires 6-2. He added two more goals a week later as Barrie took a 5-1 road win in Hamilton on Feb. 8th. Svechnikov’s other three-point showing came on Feb. 22nd with a goal and two assists in a 7-4 loss to the Mississauga Steelheads. He’s the first three-time OHL Rookie of the Month award recipient since Mississauga’s Alexander Nylander accomplished the feat during the 2015-16 season.

A 17-year-old native of Barnaul, Russia, Svechnikov leads OHL rookies in both goals (31) and points (55) over just 36 games. He represented Russia at the 2018 IIHF World Junior Hockey Championship in Buffalo, recording five assists in as many games against much older competition. The top-ranked North American skater in NHL Central Scouting’s January Midterm Rankings, Svechnikov represented Team Orr at the 2018 Sherwin-Williams CHL/NHL Top Prospects Game in Guelph. He was the first overall pick of the 2017 CHL Import Draft.

Vaughn OHL Goaltender of the Month – Jeremy Helvig (Kingston Frontenacs):
Carolina Hurricanes prospect Jeremy Helvig of the Kingston Frontenacs is the Vaughn OHL Goaltender of the Month for February. The overage veteran led all netminders with a 2.32 goals-against average and a .922 save percentage over nine games, guiding the Frontenacs to a 6-1-2-0 record in the process. Helvig earned first star honours on three different occasions. He earned top honours on Feb. 3rd, guiding the Frontenacs to a 5-3 win over the Niagara IceDogs with a 36-save effort. He made 23 saves to backstop the Fronts to a 2-1 win over the Peterborough Petes on Feb. 16th and followed that effort up by setting a new all-time franchise record with his 76th win on Feb. 18th, turning aside 29 shots in a 6-1 win over the Kitchener Rangers. He finished the month of February by helping Kingston earn a point with 30 saves in a 2-1 overtime loss to the Hamilton Bulldogs on Feb. 23rd.

A 20-year-old native of Markham, Ont., Helvig leads OHL goaltenders with a .920 save percentage to go along with a 2.53 goals-against average, a record of 27-13-6-3 and two shutouts in 49 games. Kingston’s all-time career wins and shutouts leader, Helvig is currently in his fourth season with the club, playing to a record of 77-46-12-7 with a 2.70 goals-against average, .912 save percentage and 10 shutouts over 149 games. Originally Kingston’s third round pick in the 2013 OHL Priority Selection from the Markham Majors Minor Midgets, he was Carolina’s fifth round pick in the 2016 NHL Draft.