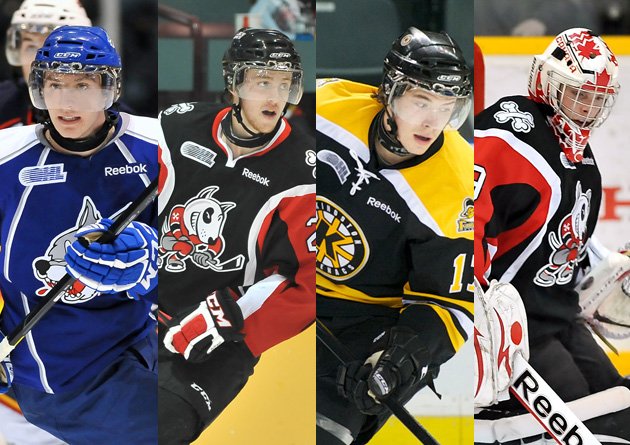 Toronto, ON – The Ontario Hockey League today announced the top OHL Performers of the Month for February, 2012, including forward Michael Sgarbossa of the Sudbury Wolves, defenceman Dougie Hamilton of the Niagara IceDogs, rookie Ryan Kujawinski of the Kingston Frontenacs, and IceDogs’ goaltender Mark Visentin.

Michael Sgarbossa of the Sudbury Wolves led the OHL with 25 points in 13 February games tying for the league-lead with 13 goals while adding 12 assists.  He recorded a point in all 13 games last month including six multi-point games and is currently on a 16-game point streak which is tied for third longest in the OHL this season.  He was named the OHL Player of the Week after matching a season-high with four points including his second hat-trick of the season as first star despite a 5-4 overtime loss to the Brampton Battalion on February 19.  In total, Sgarbossa was recognized as a star of the game eight times including three first star honours, two seconds, and three third star awards.

Sgarbossa, a 19-year-old from Campbellville, ON, is playing in his fourth OHL season.  Now a Colorado Avalanche prospect, Sgarbossa has a career-high 84 points in 57 games with 41 goals and 43 assists which has him currently ranked second in OHL scoring.

Dougie Hamilton of the Niagara IceDogs claims the award for the third time this season after leading all defencemen in scoring with 13 points in seven games tallying four goals including two game-winners, along with nine assists and a plus-minus rating of plus-11.  He picked up a point in all seven of his February games with four multi-point contests including February 26 against the Kingston Frontenacs where he matched a season-high with four points scoring two goals and two assists as first star of the 9-3 victory.

Hamilton, an 18-year-old from Toronto, ON, is playing in his third OHL season with the IceDogs.  Last season Hamilton finished third in voting for the OHL Defenceman of the Year Award but claimed both OHL and CHL Scholastic Player of the Year honours.  Selected ninth overall by the Boston Bruins in the 2011 NHL Entry Draft, Hamilton leads all OHL defencemen with 63 points in 42 games.

Ryan Kujawinski led all OHL rookies in scoring with 15 points including nine goals and six assists in 12 February games for the Kingston Frontenacs.  He recorded a point in nine of his games with four multi-point games including three straight which led the Frontenacs to their second three-game winning streak of the season.  His first multi-point game of the month was a career-high four-point game with two goals and two assists as third star of a 6-3 win over the Guelph Storm, followed by a two-goal performance February 16 in a 5-4 win over the Peterborough Petes, ending his streak with one goal and one assist February 17 in a 9-3 win over the Erie Otters.

Kujawinski, a 16-year-old from Iroqouis Falls, ON, was selected fourth overall by the Sarnia Sting in the 2011 OHL Priority Selection.  Since joining the Frontenacs midway through this season he has scored 25 points in 23 games with a total of 14 goals and 17 assists for 31 points in 52 games this season.

Mark Visentin of the Niagara IceDogs earns the award for the second straight month after posting an 8-1-0-0 record in February including three shutout victories with a goals-against-average of 1.45 and save percentage of .944.  He began the month with eight straight wins giving him 17 straight victories in as many starts dating back to December 8 helping the IceDogs climb to first place in the Eastern Conference standings.  Visentin captured Vaughn CHL Goaltender of the Week honours after setting a new OHL single season record with 10 shutouts in a 3-0 win over the Sault Ste. Marie Greyhounds on February 18.  His mark of 10 shutouts passes the previous record of nine set by Toronto’s Don Lockhart in the 1949-50 season.

Visentin, a 19-year-old from Waterdown, ON, is a Phoenix Coyotes prospect playing in his fourth OHL season.  In 38 games this season he carries a record of 27-8-0-2 and has an OHL-best goals-against-average of 2.05 and the fourth best save percentages in the league with a mark of .924.