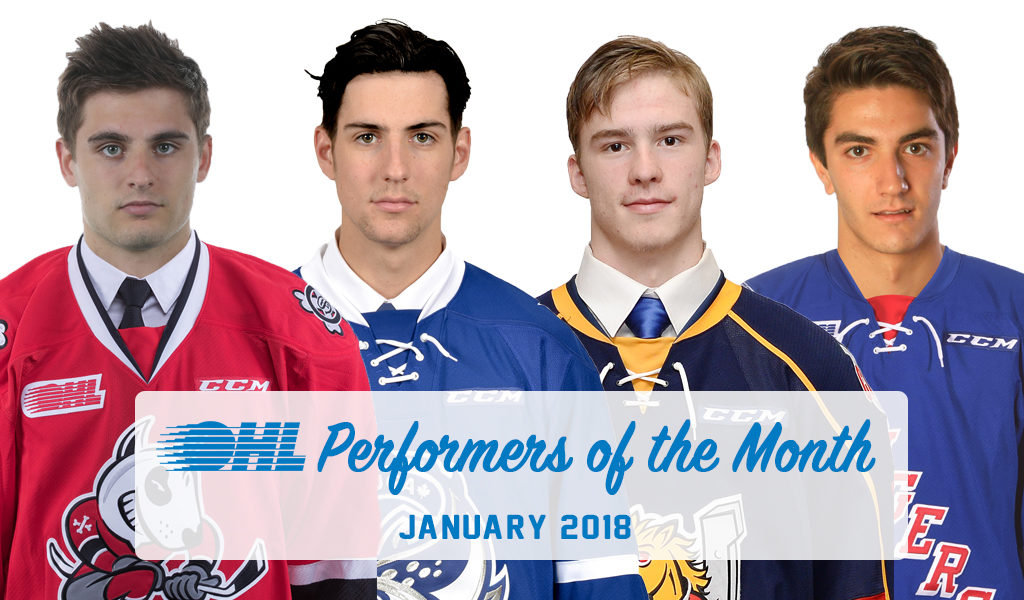 OHL Player of the Month – Sam Miletic (Niagara IceDogs):
Pittsburgh Penguins prospect Sam Miletic of the Niagara IceDogs is the OHL Player of the Month for January after leading all players with 25 points including 12 goals, 13 assists over 13 games with a plus/minus rating of plus-7. Acquired by the IceDogs early in the month, Miletic recorded 15 of his 25 points with his new club including a four-point effort on Jan. 26th against Sarnia, completing a hat-trick on the overtime winner. He had a total of seven multi-point efforts including two-goal outings on Jan. 7th with the London Knights against the North Bay Battalion as well as on Jan. 12th with the IceDogs against the Barrie Colts. Miletic earned first star of the game honours three different times, helping the IceDogs play to a 5-2-1-1 record since acquiring him as they lead the Central Division.

A 20-year-old native of Bloomfield Hills, Mich., Miletic sits fourth in OHL scoring with 69 points and tied for third in league assists with 45. Signed by the Pittsburgh Penguins to a three-year entry level NHL contract this past fall, Miletic was originally a 15th round pick of the London Knights in the 2013 OHL Priority Selection. He’s recorded 138 points (64-74–138) over his 144-game OHL career.

OHL Defenceman of the Month – Nicolas Hague (Mississauga Steelheads):
Vegas Golden Knights prospect Nicolas Hague of the Mississauga Steelheads is the OHL Defenceman of the Month for January, leading all blueliners with 16 points including five goals and 11 assists over 10 games. The 6-foot-5, 216Ib. Hague registered five multi-point outings last month including three assists on Jan. 3rd at Erie. He ended January with back-to-back three point efforts that both included a goal and two assists on Jan. 26th against Peterborough and again on Jan. 28th against Sudbury. Hague enters February on a three-game goal-scoring streak after helping the Steelheads play to an 8-2-0-0 record in the month of January.

A 19-year-old native of Kitchener, Ont., Hague leads the Steelheads in scoring with 56 points including 25 goals and 31 assists in 46 games. Mississauga’s all-time leader in points by a defenceman, Hague set a single-season franchise record for goals by a blueliner when he scored his 21st back on Jan. 5th against Kitchener. His 25 goals are the most by an OHL defenceman since Anthony DeAngelo and Jordan Subban both reached the mark during the 2014-15 season. Hague represented Team OHL in the 2017 CIBC Canada-Russia Series back in November and was a second round pick of the Vegas Golden Knights this past summer. He was Mississauga’s second round pick in the 2014 OHL Priority Selection.

OHL Rookie of the Month – Andrei Svechnikov (Barrie Colts):
For the second time this season, Barrie Colts forward Andrei Svechnikov is the OHL Rookie of the Month. The top-ranked North American skater in NHL Central Scouting’s Midterm Rankings released earlier this month, Svechnikov led OHL rookies with 17 points including nine goals and eight assists over 11 games in January. Svechnikov returned from the 2018 World Junior Hockey Championship where he represented Russia to register points in 10 of 11 games, entering the month of February on a six-game run of multi-point performances. He had a pair of two-goal games including Jan. 19th at Mississauga as well as Jan. 31st at Owen Sound.

A 17-year-old native of Barnaul, Russia, Svechnikov leads OHL rookies with 23 goals to go with 15 assists for 38 points in just 27 games after missing time with an injury. The 6-foot-3, 184Ib. left-handed shot was the first overall pick of the 2017 CHL Import Draft and represented Team Orr in the recent 2018 Sherwin-Williams CHL/NHL Top Prospects Game.

Vaughn OHL Goaltender of the Month – Mario Culina (Kitchener Rangers):
Overage netminder Mario Culina of the Kitchener Rangers is the Vaughn OHL Goaltender of the Month for January. Suiting up for both the Rangers and Sudbury Wolves this month, Culina played to an overall record of 6-1-1-0, posting a 1.74 goals-against average, a .946 save percentage and two shutouts over eight games. He is a perfect 6-0-0-0 since joining the Rangers on Jan. 8th. His month was headlined by back-to-back shutout efforts including a 34-save performance on Jan. 17th at Niagara followed by a 36-save showing at home to the Erie Otters on Jan. 19th. He enters the month of February on a six-game winning streak, making over 30 saves in three of his last four games.

A 20-year-old native of Sault Ste. Marie, Ont., Culina joined the Sudbury Wolves in late November after starting the season with the Ryerson University Ram’s Men’s Hockey team. A Mastercard Memorial Cup champion with Windsor last spring, Culina has posted a 2.61 goals-against average, .921 save percentage and 8-5-2-0 record in 16 games this season, improving to 31-18-4-1 in his OHL career. He was originally signed as a free agent by the Windsor Spitfires in September 2015.