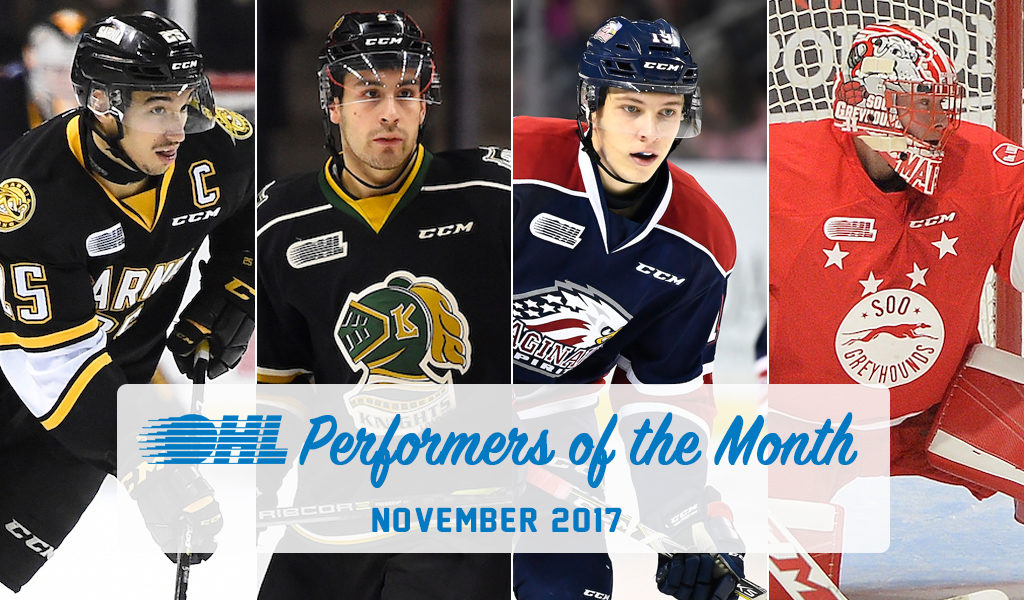 OHL Player of the Month – Jordan Kyrou (Sarnia Sting):
For the second consecutive month, St. Louis Blues prospect Jordan Kyrou of the Sarnia Sting is the OHL Player of the Month. The 19-year-old led all players with 24 points including six goals, 18 assists in 11 games. Kyrou’s November included points in 10 of his 11 games headlined by a six point effort to start the month on Nov. 2nd in Peterborough. Kyrou’s six points (2-4–6) are the most by a Sting player in a single game since Charles Sarault registered six in February 2013. Other prominent performances included a four point output (1-3–4) on Nov. 17th against Windsor. In total, Kyrou received star of the game recognition four times including one first star nomination, two second star nominations as well as one third star nomination. His continued excellence has helped the Sting hold down top spot in the weekly CHL Top 10 Rankings throughout the month as Sarnia holds an overall record of 21-4-1-0.

A 6-foot, 185Ib. right-winger from Toronto, Ont., Kyrou currently leads OHL scoring by a 10-point margin, registering 52 points including a league-leading 34 assists along with 18 goals in 24 games. His 2.17 points-per-game and 21 power play points are also league highs. The second round pick of the St. Louis Blues in the 2016 NHL Draft is currently in his fourth OHL season, producing a career regular season stat line of 78 goals, 155 assists and 233 points over 218 games. Last season, Kyrou recorded the OHL’s longest point streak since 2008 when he recorded points in 30 straight contests from Jan. 1st to Mar. 12th, four games shy of a Sting club record. He attended Hockey Canada’s Summer Showcase this past summer in Plymouth, Mich. and represented the OHL in the 2017 CIBC Canada Russia Series.

OHL Defenceman of the Month – Evan Bouchard (London Knights):
Draft eligible London Knights rearguard Evan Bouchard is the OHL Defenceman of the Month for November. The 18-year-old third-year blueliner led all defencemen with 18 points including five goals, 13 assists and a plus/minus rating of plus-11 over 10 contests. Bouchard recorded points in eight of his 10 November outings, headlining the month with a career-high four point (1-3–4) showing on Nov. 3rd against Saginaw. He also registered a pair of three point efforts, collecting three assists on Nov. 10th against Flint as well as a goal and two assists on Nov. 26th in Guelph. Bouchard helped the Knights play to a record of 7-2-1-0 in November.

A 6-foot-2, 191Ib. native of Oakville, Ont., Bouchard sits fourth in scoring among OHL defencemen with 30 points (8-22–30) in 25 games while his 95 shots on goal rank second among blueliners. A veteran of 136 OHL regular season games, Bouchard has 91 points (21-70–91) in his OHL career. He was London’s first round pick in the 2015 OHL Priority Selection and was an ‘A’ rated prospect on NHL Central Scouting’s November ‘Players to Watch’ List. Bouchard represented the OHL in the 2017 CIBC Canada Russia Series this past month.

OHL Rookie of the Month – Blade Jenkins (Saginaw Spirit):
Draft eligible Saginaw Spirit forward Blade Jenkins is the OHL Rookie of the Month for November. The 17-year-old led all rookies with 14 points including nine goals, five assists and a plus/minus rating of plus-10 in 12 games. Jenkins had points in eight of his 12 November outings, with a pair of three-point performances headlining his stat line. He recorded his first career OHL hat-trick on Nov. 4th against North Bay before scoring twice and adding an assist on Nov. 22nd in Flint. Jenkins, whose 14 points all came at even strength, helped the Spirit to a 9-2-1-0 month of November.

Vaughn OHL Goaltender of the Month – Matthew Villalta (Sault Ste. Marie Greyhounds):
Los Angeles Kings prospect Matthew Villalta of the Sault Ste. Marie Greyhounds is the OHL Goaltender of the Month for November. The 18-year-old played to a perfect 9-0-0-0 record with an OHL-best 2.22 goals-against average and a .907 save percentage with one shutout over nine November appearances, helping the Greyhounds climb into the West Division lead on a 12-game winning streak. Villalta backstopped the Hounds to a perfect month, putting together back-to-back one-goal performances on Nov. 4th against Niagara and Nov. 5th against North Bay. He registered his first shutout of the season on Nov. 17th with a 16-save showing in Sudbury.

A 6-foot-3, 183Ib. native of Godfrey, Ont. outside of Kingston, Villalta is second among OHL goaltenders with a 2.53 goals-against average along with a 16-2-1-0 record, a .907 save percentage and one shutout. He holds an impressive career record of 41-5-1-0 over 52 career regular season games to go with a 2.45 goals-against average, a .914 save percentage and two shutouts. A free agent addition by the Greyhounds out of Training Camp in 2016, Villalta was a third round pick by the Los Angeles Kings this past summer.