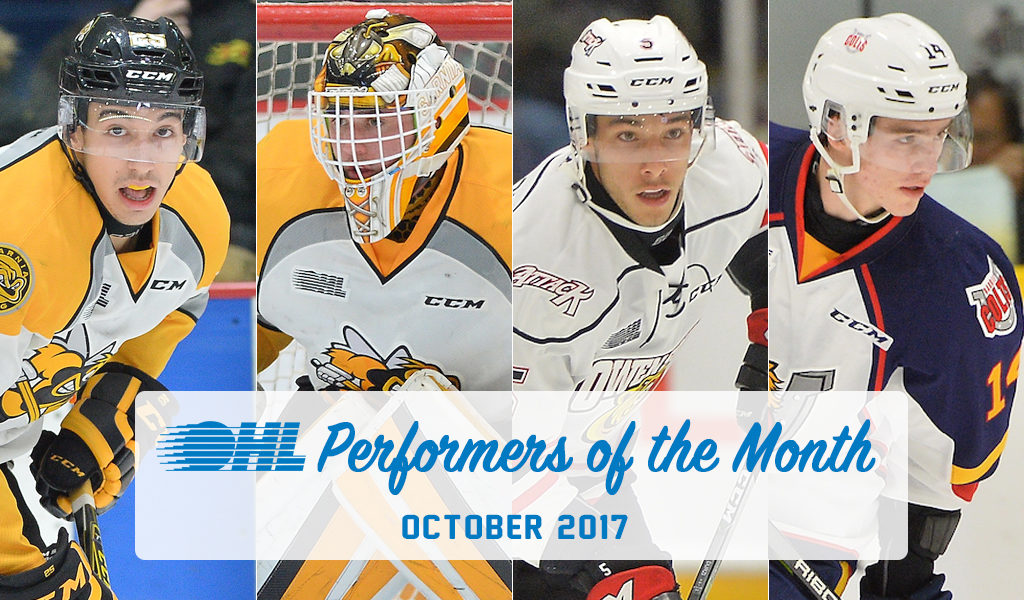 OHL Player of the Month – Jordan Kyrou (Sarnia Sting):
St. Louis Blues prospect Jordan Kyrou of the Sarnia Sting is the OHL Player of the Month for October after leading the league with 12 goals 13 assists and 25 points in 12 games along with a plus/minus rating of plus-9. Kyrou had points in 11 of 12 contests, helping the Sting string together a franchise record 13-straight victories headed into the month of November. His current five game trend includes three consecutive three-point outings including the latest in Sunday’s 6-2 win over the Flint Firebirds. Kyrou collected at least three points on five separate occasions including a pair of four-point showings on Oct. 13th vs. Mississauga (1-3–4) and Oct. 19th in North Bay (3-1–4) when he scored his first career hat-trick. He scored a second hat-trick this past Friday in a 6-3 win over the Sault Ste. Marie Greyhounds. Kyrou received star of the game recognition four times this past month including a pair of first star appointments on Oct. 13th and Oct. 19th.

A 6-foot, 185Ib. right-winger from Toronto, Ont., Kyrou is tied for the OHL scoring lead with Windsor’s Aaron Luchuk, putting up 28 points (12-16–28) over 13 contests. The second round pick of the St. Louis Blues in the 2016 NHL Draft is currently in his fourth OHL season, producing a career regular season stat line of 72 goals, 137 assists and 209 points over 207 games. Last season, Kyrou recorded the OHL’s longest point streak since 2008 when he recorded points in 30 straight contests from Jan. 1st to Mar. 12th, four games shy of a Sting club record. He attended Hockey Canada’s Summer Showcase this past summer in Plymouth, Mich. and will represent the OHL in the 2017 CIBC Canada Russia Series on Nov. 9th in Owen Sound.

OHL Defenceman of the Month – Sean Durzi (Owen Sound Attack):
Owen Sound Attack defenceman Sean Durzi is the OHL Defenceman of the Month for October after he led all rearguards with 20 points including seven goals and 13 assists over 11 contests along with a plus/minus rating of plus-7. Durzi had points in 10 of 11 games, helping the Attack take sole possession of first place in the Midwest Division. He strung together points in nine straight games from Sept. 29th to Oct. 21st. The month was highlighted by a four point (1-3–4) showing on Oct. 14th against the Oshawa Generals as the Attack claimed a 12-6 victory. Durzi also scored twice in a 5-2 win over the Kitchener Rangers on Oct. 27th.

A 5-foot-11, 185Ib. defenceman from Mississauga, Ont., Durzi leads the OHL in assists with 17 and is third in the league in points with 25 (8-17–25) over 14 games. A veteran of 119 OHL regular season games, Durzi is currently in his third season with the Attack, having recorded 20 goals, 59 assists and 79 points on his career. He was a 12th round pick by the club in the 2014 OHL Priority Selection from the Mississauga Rebels Minor Midgets.

OHL Rookie of the Month – Andrei Svechnikov (Barrie Colts):
Barrie Colts forward Andrei Svechnikov has been named the OHL Rookie of the Month for October after leading all newcomers with nine points including seven goals and two assists over just five games along with a plus/minus rating of plus-6. Svechnikov recorded three different multi-point performances, starting the month with his first career OHL hat-trick on Oct. 5th vs. North Bay. He continued to produce, scoring twice in Barrie’s 6-2 win at Saginaw on Oct. 7th and headlined his October performance with four points (2-2–4) in a 7-5 win over the Erie Otters on Oct. 12th. Svechnikov’s month was cut short when he suffered a broken hand on Oct. 14th against North Bay. He will be sidelined for 6-8 weeks.

A 6-foot-3, 184Ib. left-handed shooting right-winger from Barnaul, Russia, Svechnikov leads the Colts with 10 goals in as many games while also recording four assists and posting a plus/minus rating of plus-6 on the season. His 14 points currently lead OHL rookies. The younger brother of former Cape Breton Screaming Eagles star Evgeny Svechnikov, Andrei was the first overall pick of the 2017 CHL Import Draft after spending last season with the USHL’s Muskegon Lumberjacks. He was one of six OHL players to receive an ‘A’ rating on NHL Central Scouting’s October Players to Watch List for next summer’s 2018 NHL Draft.

Vaughn OHL Goaltender of the Month – Justin Fazio (Sarnia Sting):
Sarnia Sting overage netminder Justin Fazio has been named the Vaughn OHL Goaltender of the Month for October after playing to a perfect 8-0-0-0 record with a 2.48 goals-against average and a .939 save percentage. Fazio enters the month of November on a nine game winning streak and has been instrumental in backstopping the Sting on their current 13-game run. Six of Fazio’s eight October victories saw him stop 35 shots or more, headlined by a 41-save effort on Oct. 20th in Sudbury along with a 46-save performance this past Friday against the Sault Ste. Marie Greyhounds. He received first star of the game recognition on three separate occasions and also made Sting franchise history, becoming the club’s career leader in wins by a goaltender with his 64th on Oct. 21st at Barrie.

A 6-foot-1, 189Ib. hometown product of Sarnia, Ont., Fazio leads OHL goaltenders with 10 victories on the season while also posting a 2.42 goals-against average and a .933 save percentage over 11 games this season. Now in his fourth full season with the Sting, Fazio has appeared in 136 career regular season games, going 65-52-7-3 with a 3.35 goals-against average and an .896 save percentage. He was Sarnia’s fourth round pick in the 2013 OHL Priority Selection from the Elgin-Middlesex Chiefs Minor Midgets.