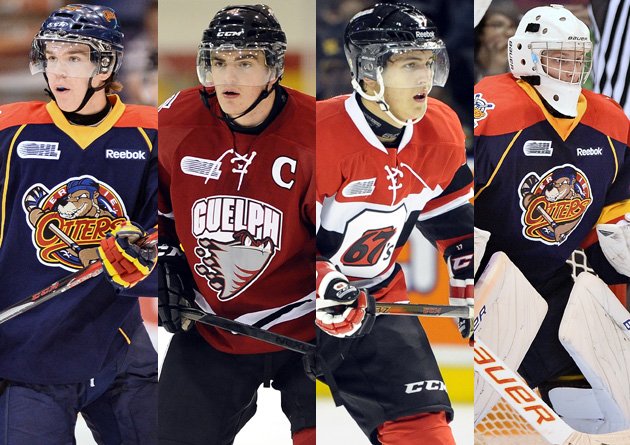 Toronto, ON – The Ontario Hockey League today announced the Top OHL Performers of the Month for October, 2013, including Connor McDavid of the Erie Otters, defenceman Matt Finn of the Guelph Storm, rookie Travis Konecny of the Ottawa 67’s, and Otters’ goaltender Oscar Dansk.

Connor McDavid of the Erie Otters is the OHL’s Player of the Month after collecting 23 points in just 10 games including four goals and a league-high 19 assists while earning an impressive plus-minus rating of plus-13.  McDavid tallied points in all 10 October games for the Otters including nine multi-point contests helping his club to a perfect 10-0-0-0 record last month tying a franchise record for consecutive wins.  He was named a star of the game on six different occasions claiming first star honours in back-to-back games including October 18 when he matched a career-high with four assists in a 4-3 win over the Belleville Bulls, and October 19 when he scored his second career shorthanded goal and added an assist as part of a 6-2 win over the Ottawa 67’s.

McDavid, a 16-year-old from Newmarket, ON, is playing in just his second OHL season after earning Rookie of the Year honours with 66 points in 63 games last season.  Eligible for the 2015 NHL Draft, McDavid has 28 points in 15 games this season.  He was recently named to the Team OHL SUBWAY Super Series roster for the second straight season and is once again the youngest player among the 29 who will compete against the Russian National Junior Team November 21 in Oshawa, and November 25 in Sudbury.

Matt Finn of the Guelph Storm is the OHL’s Defenceman of the Month after recording 12 points in 11 games scoring four goals and eight assists with a plus-minus rating of plus-15.  He finished the month with a career-high 10-game point-streak helping the Storm win eight straight games to close out October.  In the final two games of the month, Finn picked up back-to-back two-point performances both times scoring a goal and an assist including October 27 where he earned first star honours in a 7-4 win over the London Knights, and October 30 as part of a 7-1 win over the Peterborough Petes.

Finn, a 19-year-old from Toronto, ON, is playing in his fourth OHL season with the Storm.  The club’s captain is currently third in OHL scoring among defencemen with 16 points in 14 games.  Selected by the Toronto Maple Leafs in the second round of the 2012 NHL Draft, Finn will represent Team OHL in the 2013 SUBWAY Super Series game November 21 in Oshawa.

Travis Konecny scored four goals and five assists for nine points in 11 games for the Ottawa 67’s to claim Rookie of the Month honours for October.  The first overall pick in the 2013 OHL Priority Selection collected two multi-point games including a career-high three-point game on October 24 with two goals and one assist as second star of an 8-1 win over the Peterborough Petes.  He also claimed third star honours following a big game October 13 against the Sudbury Wolves with two points in the third period including the game-tying goal in the final minute of play before netting the shootout winner to lift the 67’s to a 5-4 victory.

Konecny, a 16-year-old graduate of the Elgin-Middlesex Chiefs earned ALLIANCE Player of the Year honours before becoming the first 67’s player to be selected first overall since Alyn McCauley in 1993.  Through 15 games this season, Konecny is currently tied for the rookie scoring lead with 13 points in 15 games.

Oscar Dansk of the Erie Otters posted a perfect 8-0-0-0 record in October with a league-low goals-against-average of 1.75 and a save percentage of .921.  He earned his first two career shutout victories in back-to-back games beginning with a season-high 35-save performance on October 11 as first star of a 4-0 win over the Kitchener Rangers.  He also made 19 saves on October 14 as part of a 7-0 win over the Mississauga Steelheads.  Dansk’s efforts in goal helped the Otters win 10 straight games in October equaling the club’s franchise record for consecutive wins.

Dansk, a 19-year-old from Stockholm, Sweden, is playing in his second career OHL season with the Otters.  Selected by the Columbus Blue Jackets in the second round of the 2012 NHL Draft, Dansk currently has a 10-1-1-0 record with two shutouts this season along with the league’s second best goals-against-average at 2.00 and the third best save percentage at .922.