OHL Top Performers of the Month for December 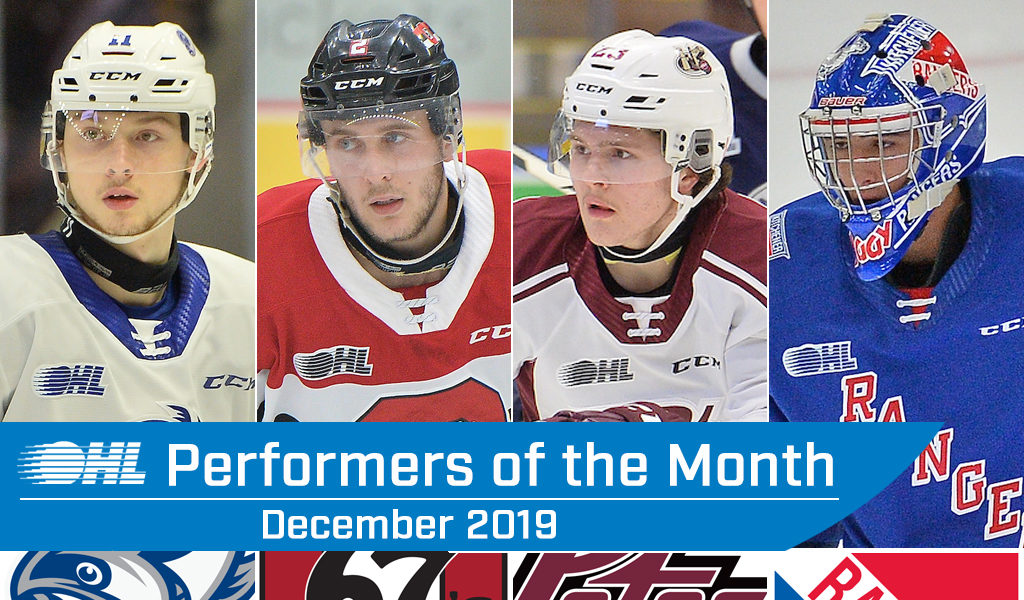 OHL Player of the Month – Cole Schwindt (Mississauga Steelheads):
Florida Panthers prospect Cole Schwindt of the Mississauga Steelheads is the OHL Player of the Month for December, leading the league with 21 points including 12 goals, nine assists and a plus/minus rating of plus-7 over 12 games. The 6-foot-3, 186Ib. centreman recorded at least a point in 11 of his 12 December outings headlined by six different multi-point showings. Schwindt scored the late third period game winner in a 4-2 triumph over the North Bay Battalion on Dec. 13th and put up a goal and an assist a night later as the Steelheads fell to the Sarnia Sting 7-6. He earned second star honours on Dec. 19th in Windsor, scoring twice while adding an assist as the Trout fell to the Windsor Spitfires 5-4 in overtime. Schwindt recorded a career-high four points on Dec. 28th in Owen Sound, posting his first career OHL hat-trick in a 6-3 win over the Attack. He finished 2019 on a high note, scoring another hat-trick as the Steelheads skated to a 5-2 win in Hamilton on Dec. 31st. Schwindt earned three star recognition six times in December, recording over half of his 40 points this season over the course of the month.

An 18-year-old from Kitchener, Ont., Schwindt leads the Steelheads with 40 points including 17 goals and 23 assists in 37 games this season. The third year veteran is well on his way to surpassing last year’s total of 49 points as he continues to produce at over a point-per-game clip. Originally a fourth round pick of the Steelheads in the 2017 OHL Priority Selection, Schwindt was selected by the Florida Panthers in the third round of the 2019 NHL Draft.

OHL Defenceman of the Month – Noel Hoefenmayer (Ottawa 67’s):
Ottawa 67’s overage defenceman Noel Hoefenmayer has been named OHL Defenceman of the Month for the second time this season after recording 13 points including five goals, eight assists and a plus/minus rating of plus-8 over seven contests. Hoefenmayer recorded at least a point in six of his seven December outings including three different three-point efforts as Ottawa enjoyed a perfect 7-0 month. After pitching in with a goal and an assist in a 5-1 win over Gatineau on Dec. 8th, Hoefenmayer dished out three assists on Dec. 14th as the 67’s defeated the Barrie Colts 7-2. He played a central role in Ottawa’s 5-4 road win over the Oshawa Generals on Dec. 20th, earning second star honours with two goals and an assist. Hoefenmayer finished 2019 with another three-point showing, scoring while adding two helpers in a 6-1 win over the Peterborough Petes on Dec. 29th.

A 20-year-old native of North York, Ont., Hoefenmayer leads OHL defenders with 49 points including 15 goals, 34 assists along with a plus/minus rating of plus-32 over 33 games. The 6-foot-1 rearguard has been a big contributor on Ottawa’s top-ranked 30.2% power play this season, registering 22 points on the man advantage. A fifth-year veteran, Hoefenmayer is currently inside the franchise top-10 for both career points by a defenceman (189) and career games played (273). He was a fourth round pick of the Arizona Coyotes in the 2017 NHL Draft before going unsigned and attended rookie camp with the Carolina Hurricanes in September. Hoefenmayer was a second round pick of the 67’s in the 2015 OHL Priority Selection.

OHL Rookie of the Month – Mason McTavish (Peterborough Petes):
Peterborough Petes forward Mason McTavish has been named OHL Rookie of the Month for the second time this season, leading all OHL freshmen with 11 points including nine goals and two assists along with a plus/minus rating of plus-6 over nine December contests. McTavish struck for his first career OHL hat-trick in a 7-4 win over the Hamilton Bulldogs on Dec. 12th. He followed that up with two goals in a 3-2 road win over the Oshawa Generals a night later. The 6-foot, 198Ib. centre recorded a career-high five points on New Year’s Eve in Niagara, scoring three times while adding two assists in a 7-3 win over the IceDogs. McTavish was a key part of Peterborough’s offence in December, helping them climb to the top of the East Division.

A 16-year-old native of Pembroke, Ont., McTavish leads OHL rookies with 32 points including 24 goals, eight assists and a plus-8 rating over 31 games. The fifth overall pick of the 2019 OHL Priority Selection, McTavish represented Canada White at the 2019 World Under-17 Hockey Challenge, recording three points (2-1–3) over six contests. He was the OHL Rookie of the Month for October.

OHL Goaltender of the Month – Jacob Ingham (Kitchener Rangers):
Los Angeles Kings prospect Jacob Ingham of the Kitchener Rangers is the OHL Goaltender of the Month for December, playing to a 9-1-0-0 record along with a 1.69 goals-against average, .948 save percentage and two shutouts over 10 appearances. Ingham won his first six December starts, posting a career-high 51 saves in a 3-2 shootout road win over the Owen Sound Attack on Dec. 7th. He registered a 28-save shutout on Dec. 10th in London, turned aside 35 of 36 on Dec. 14th for a 6-1 win in Guelph and stopped all 45 shots he faced in a 3-0 road win over Owen Sound on Dec. 18th. Ingham rounded out 2019 by stopping 35 of 36 in a 6-1 New Year’s Eve road win over the Erie Otters. In total, Ingham earned three star recognition six different times in December, receiving first star honours on three occasions.

A 19-year-old native of Barrie, Ont., Ingham owns a 16-4-2-1 record in this, his fourth OHL season. He’s posted a 2.61 goals-against average, .926 save percentage and two shutouts over 23 contests, helping the Rangers turn their season around to sit second in the Midwest Division. The 6-foot-4, 198Ib. netminder owns a career record of 76-57-7-8 with a 3.21 goals-against average and .897 save percentage over 154 regular season games between Kitchener and Mississauga. He was a sixth round pick of the Los Angeles Kings in the 2018 NHL Draft. Ingham was originally selected by the Mississsauga Steelheads in the second round of the 2016 OHL Priority Selection.