OHL Top Performers of the Month for November 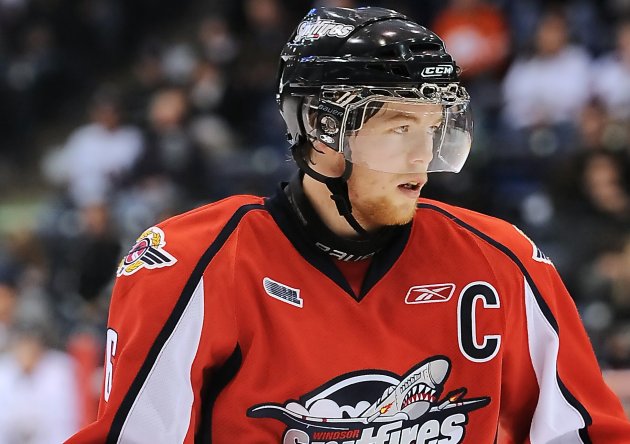 Toronto, ON – The Ontario Hockey League today announced the top OHL Performers of the Month for November, 2010.

OHL Player of the Month – Jason Akeson, Kitchener Rangers
Jason Akeson of the Kitchener Rangers led the OHL with an impressive 29 points in 10 games played in November.  He scored six goals and added 23 assists and tied for second in the league with a plus-minus rating of plus-15.  He recorded points in all 10 games this month with multi-point efforts in seven contests to lead the Rangers to an 8-1-0-1 record in November.  He was named the CHL and OHL Player of the Week for the week ending November 7 after scoring 15 points in three games highlighted by a career-high six point game November 5 with two goals and four assists as first star of an 8-0 win over the Belleville Bulls.

Akeson, a 20-year-old from Orleans, ON, is playing in his fourth OHL season with the Rangers.  He currently leads the OHL in scoring with 48 points including 12 goals and 36 assists in 24 games.

Kal Tire OHL Rookie of the Month – Eric Locke, Windsor Spitfires
Eric Locke of the Windsor Spitfires led all OHL rookies with nine goals in November and added three assists for 12 points in 10 games with a plus-minus rating of plus-4.  He recorded three-point performances in three different games this month including the first two hat-tricks of his OHL career.  His first career hat-trick included the game-winning goal as first star of a 7-3 win over the London Knights on November 19, and he was also named first star of the game scoring three goals in a 7-2 win over the Peterborough Petes to close out the month on November 28.

Locke, a 17-year-old from Toronto, ON, was selected by the Spitfires in the 13th round of the 2009 OHL Priority Selection.  Eligible for the 2012 NHL Entry Draft, Locke is second among rookies in goals with 15 and tied for sixth overall in scoring with 22 points in 27 games.

OHL Defenceman of the Month – Ryan Ellis, Windsor Spitfires
Ryan Ellis of the Windsor Spitfires scored five goals and 12 assists for 17 points in 10 games in November.  He produced five multi-point games including a season-high four-point game with two goals including the overtime winner plus two assists as third star of a 6-5 victory over the Sault Ste. Marie Greyhounds on November 20.  He also recorded three assists in front of a hometown crowd November 26 as first star of a 5-2 win over the Oshawa Generals on a night where he was honoured pre-game for setting a new Spitfires record for points by a defenceman with 230.  He set the record with an assist on November 10 breaking the record previously held by Chicago Blackhawks Head Coach and Spitfire great Joel Quenneville.

Ellis, a 19-year-old from Freelton, ON, is playing in his fourth OHL season.  Recently named to Canada’s National Junior Team Selection Camp Roster for the third straight year, the Nashville Predators prospect captained Team OHL at the 2010 SUBWAY Super Series and is second in scoring among defencemen with 32 points in 24 games.

Vaughn OHL Goaltender of the Month – Scott Wedgewood, Plymouth Whalers
Scott Wedgewood of the Plymouth Whalers earned a 7-1-0-0 record in November with a league-best goals-against-average of 1.65 and save percentage of .947.  He was named the Vaughn CHL Goaltender of the Week for the week ending November 28 highlighted by a shutout victory November 24 in a 3-0 win over the Saginaw Spirit with 37 saves.  He made a total of 248 saves in November including 40 as first star of a 3-2 shootout win over the Brampton Battalion on November 4.  He also stopped all six shots he faced in his start for Team OHL sharing a 4-0 shutout win with Scott Stajcer over Team Russia in the SUBWAY Super Series game played November 11 in London, ON.

Wedgewood, an 18-year-old from Brampton, ON, is playing in his third OHL season with the Whalers.  Selected in the third round of the 2010 NHL Entry Draft by the New Jersey Devils, he is among the league leaders with a goals-against-average of 2.48 and save percentage of .920 and is tied for second in the league with two shutouts.