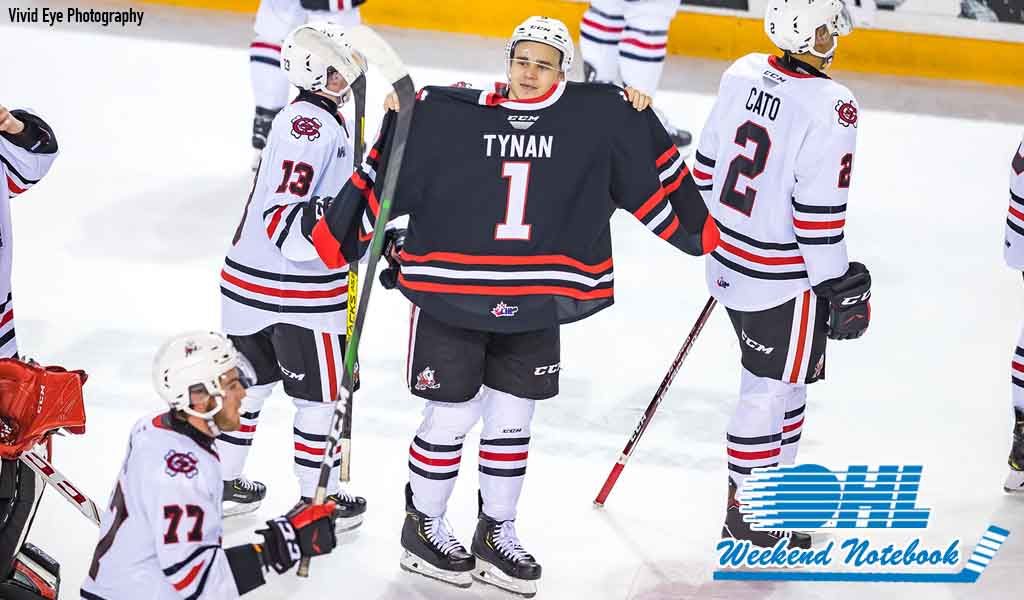 The OHL Weekend Notebook recaps the weekend that was with news, information and interesting facts from both on and off the ice. As OHL clubs head into the holiday break. Here are five of the leading stories from this past weekend:

IceDogs explode for 11 goals in return to ice
The IceDogs returned to the ice on Thursday with an 11-goal explosion over the Kingston Frontenacs. It was the squad’s first game since Dec. 12, when goaltender Tucker Tynan suffered a severe on-ice injury, resulting in the OHL postponing the remainder of the game in addition to Niagara’s next two. Prior to puck drop, the IceDogs held a ceremony to honour the first responders and all who came to the Tynan’s aid. Highlights on the night included three point nights from rookies Anthony Agostinelli and Cameron Snow, who both posted their first two career OHL goals. The Dogs also saw two-goal performances from and Jonah De Simone and Nashville Predators prospect Philip Tomasino.

Prior to tonight’s game, the @OHLIceDogs honoured everyone involved in coming to the aid of Tucker Tynan.

The #OHL extends its sincere thanks and gratitude to all of the brave first responders. pic.twitter.com/xc26Or4gmj

Beck leads 67’s to 11th straight win
Two heroic goals from rookie Jack Beck earned the 67’s a 5-4 OT win past the Oshawa Generals and an 11th straight appearance in the W column. Veterans Noel Hoefenmayer (1-2-3) and Joseph Garreffa (0-3-3) both put up three point nights, extending Garreffa’s point streak to its 13th game. Beck’s two goals were the first of his OHL career.

A big Friday night for @jackbeck191! A beautiful shot leads to his first OHL goal. Beck then scored in OT to win it for the Barber Poles.💈 #NoQuit | 📽️: @OHLHockey pic.twitter.com/jIT5g9Cijw

Big Greyhounds finish puts an end to Kitchener’s 10-game run
Friday night saw the Kitchener Rangers’ 10-game win streak come to a halt at the hands of the Soo Greyhounds in a 6-3 contest. Tye Kartye registered a goal and two assists for three points in his team’s win while Montreal Canadiens prospect Jacob LeGuerrier notched two markers. Rookie Tanner Dickinson also put up two helpers in the first two of five unanswered goals from the Greyhounds in the third period.

We score 5 goals in the 3rd to power us past the Rangers and send us into the break on a winning note.#ReleaseTheHoundspic.twitter.com/05WqZrFJbJ

Petes lead the OHL through 33 games
Despite starting the season with nine straight games on the road, the Peterborough Petes have persevered and sit first place in the OHL with a 24-7-1-1 records. The Petes still have their work cut out for them with the 24-6-0-0 Ottawa 67’s nipping at their heels, but head coach Rob Wilson’s club has been very good, benefitting from the high-scoring Toronto Maple Leafs prospect duo of Nick Robertson and Semyon Der-Arguchintsev. Rookie forward Mason McTavish has been a big part of Peterborough’s offence, becoming the CHL’s first rookie 20-goal scorer this past week. Goaltender Hunter Jones was a late cut from Canada’s National Junior Team, but has returned to Peterborough where he’s served as one of the League’s most consistent starters in the first half.

Kaliyev carries OHL scoring lead into the break
Hamilton Bulldogs forward Arthur Kaliyev is the OHL’s scoring leader at the midway mark of the season. The Los Angeles Kings prospect is well on his way to another 50+ goal season, leading the league by a considerable margin with 31 goals while adding 31 assists for 62 points over 33 games. The 18-year-old is currently in the Czech Republic representing the United States at the 2020 World Junior Hockey Championship. Kaliyev has recorded 212 points (113-99–212) over 168 career regular season games. He was a second round pick of Los Angeles in the 2019 NHL Draft.

Congrats to @LAKings prospect @Arthur_Kaliyev of @BulldogsOHL named #OHL Player of the Month for October with 14G and 25PTS. in 12GP: https://t.co/wPFt4RtHAv pic.twitter.com/5KEBXObHw9