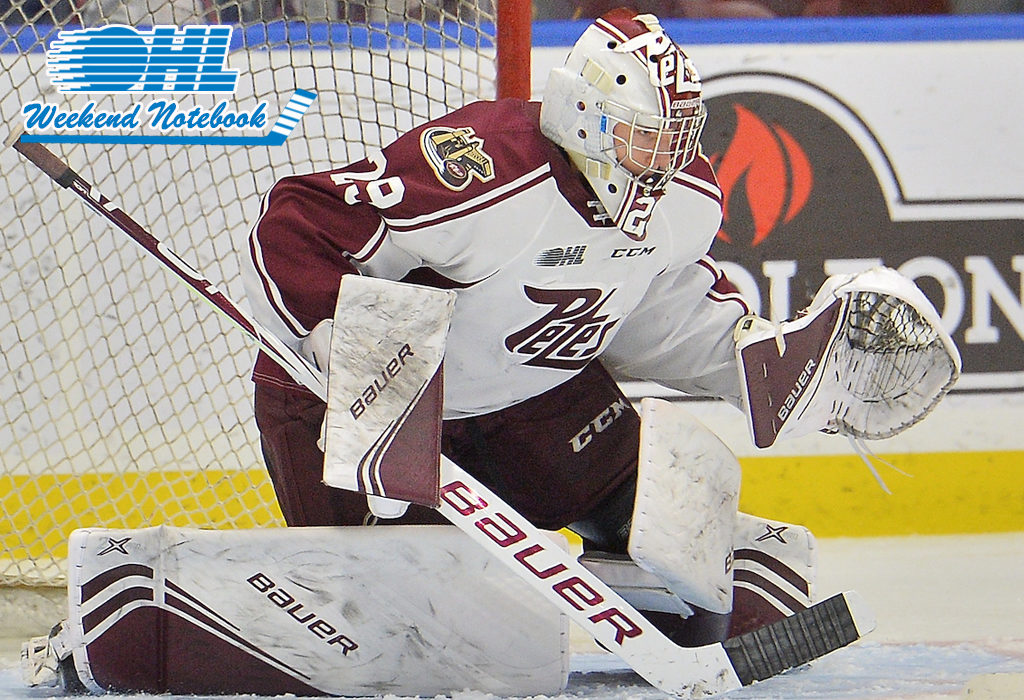 Peterborough flirting with first place
The Peterborough Petes enjoyed a three-win weekend, knocking off North Bay, Hamilton, and Erie. The squad has won five of their last six games and are currently tied with the red hot Ottawa 67’s at 40 points. Goaltender Hunter Jones, who boasts a .914 save percentage and 2.63 goals against average, received an invite to Team Canada’s National Junior Team Selection Camp in Oakville next week alongside Nico Daws of the Guelph Storm. Arizona Coyotes prospect Liam Kirk (14-19-33) has points in four straight contests as the Petes have remained successful despite missing Nick Robertson due to injury since Nov. 5th. The Petes will prepare for three games in three nights as they host the surging London Knights on Thursday before a home and home with the Kingston Frontenacs on Friday and Saturday.

Petes tame the Otters to go 3-for-3 on the weekend.#GoPetesGo

Ottawa’s first line continues to shine
The Ottawa 67’s rounded out a perfect weekend in the win column with victories in the East over the Kingston Frontenacs, the Oshawa Generals, and the North Bay Battalion. Ottawa’s first line of Austen Keating (4-7-11), Marco Rossi (6-5-11), and Joseph Garreffa (2-6-8) has been a force to be reckoned with, finishing the weekend with a combined total of 30 points in just three games. Rossi, who was named the OHL ‘On The Run’ Player of the Week, leads all 67’s scorers with 49 points and sits second among all OHL players in assists with a current total of 33.

London on seven-game winning streak
The Knights closed out the weekend on a seven-game hot streak, scoring a combined 16 goals in wins against Windsor, Erie, and the Soo. Washington Capitals prospect and top London scorer Connor McMichael picked up a combined five points (2-3-5), while Columbus Blue Jackets pick Liam Foudy got four on the weekend (2-2-4). Both players have been invited to Team Canada’s National Junior Team Selection Camp, taking place in Oakville, Ont. from Dec. 9-12. The Knights will look to stay in the W column as they head to Peterborough on Thursday to take on the first place Petes.

Sophomore standout @byfield55 recorded his first #OHL hat-trick including an OT winner as the @Sudbury_Wolves were winners in one of five on Sunday.

McKenzie off to 3-0 start as interim coach, Ingham returns to Rangers
Mike McKenzie’s time behind the Kitchener Rangers’ bench has started with three straight Midwest Division wins over Erie, Owen Sound, and Guelph. General Manager McKenzie took over as interim head coach after Jay McKee was relieved of his duties early last week. The Rangers kick off the first of three games on Thursday when they head to Windsor, hoping to improve on a fifth place Midwest Division record at 10-10-2-2 and 24 points. LA Kings prospect Jacob Ingham also returned to the crease for the Rangers after a nearly a months absence to injury, earning weekend victories in Erie and at home to Guelph on Sunday.

.@JacobIngham_’s back with a burglary 🦹‍♂️

Making his first start at The Aud in a month, the @LAKings prospect preserves an @OHLRangers lead with a sprawling save. pic.twitter.com/pwpqAQL9HO

Jenik point streak reaches 25 games
Arizona Coyotes draft pick and top Hamilton Bulldogs scorer Jan Jenik had zero plans of slowing down this past weekend as his point streak continues to amass at a current 54 points (20-34-54) in 25 straight contests. The Nymburk, Czech Republic native picked up four points (1-3-4) in games against Peterborough and Barrie, keeping him third in OHL scoring and tied in points with teammate Arthur Kaliyev. Jenik leads all OHL players in assists with 34 overall. He was named OHL Player of the Month for November with an impressive 31 points (11-20-31) throughout the month. The 25-game point streak is the OHL’s longest since Sarnia’s Jordan Kyrou had points in 30 straight games during the 2016-17 season.

Congrats to @ArizonaCoyotes prospect Jan Jenik of @BulldogsOHL named #OHL Player of the Month for November with 11G, 20A and 31PTS, continuing a 25-game point streak: https://t.co/wL7pMrUkPn pic.twitter.com/aaJHhSQe7N

Point streaks halt for Windsor, Guelph
The Windsor Spitfires and Guelph Storm saw their extensive point streaks come to an end over the weekend. The Spits, who hadn’t been held pointless since Oct. 11, fell to the London Knights in a 6-3 contest Friday night, before coming short of grabbing the W against the Niagara IceDogs the following night. Guelph’s 13-game point streak was halted by the Kitchener Rangers in a 2-1 loss on Sunday. The Storm will hope to bounce back as they head to Saginaw on Wednesday, and the Spits will prepare to host the Rangers on Thursday.

North Bay, Hamilton, Windsor, Erie come up winless
The North Bay Battalion continue to struggle to find their way, finishing out the weekend with three straight losses, one in which they coughed up a 3-0 lead to the Kingston Frontenacs. The Hamilton Bulldogs also had a less than ideal weekend, falling to the Peterborough Petes on Friday and the Barrie Colts in overtime the following night. The CHL’s third-ranked Spitfires were also unable to pick up a W in either of their games, and the Erie Otters finished up with only one of four possible points. North Bay will play host to the Flint Firebirds in their only game in the next week, while the Bulldogs gear up for back-to-back games against the division rival Mississauga Steelheads. The Otters will welcome the Soo Greyhounds and Sarnia Sting to the Erie Insurance Arena this weekend.

RECAP: Hayden Fowler scores the teddy bear toss goal, but the Peterborough Petes spoil the night with a 3-1 decision. Read the full recap below.

Kingston still on Wright path
While the Frontenacs definitely didn’t get the result they wanted in Ottawa last Wednesday, falling to their nearly unstoppable division rivals by a score of 11-6, it’s certainly worth highlighting 15-year-old rookie Shane Wright’s six-game point streak. Wright lifted the Fronts to a 4-3 comeback victory on Friday over the North Bay Battalion after climbing back from a 3-0 deficit. Wright, who was granted exceptional status this season, sits behind teammate Zayde Wisdom in Kingston scoring with 20 points (11-9-2) on the year and counting. With six goals and nine points in the month of November, Wright was recently named OHL Rookie of the Month.

The silver lining in Sarnia
The Sting were only able to pick up two of a possible six points on the weekend, but their bright spot was an 8-3 win over the Soo Greyhounds on Saturday, with Jacob Perreault (4-2-6) and Jamieson Rees (1-4-5) registering impressive multi-point nights over the course of their last three games. Drafted by the Carolina Hurricanes in the second round of the NHL Draft last June, Rees currently sits second in Sarnia scoring with 39 points (13-26-39), while NHL Draft-eligible Perreault sits at fourth with 30 points (14-16-30) so far.

Sting Swarm the Hounds with 8-3 Win!@LeonsFurniture is back with the Game Story from a total team effort last night in the Soo : https://t.co/73fvvufvu9@LeonsFurniture – Part of the Family pic.twitter.com/GkE6eY7VAr