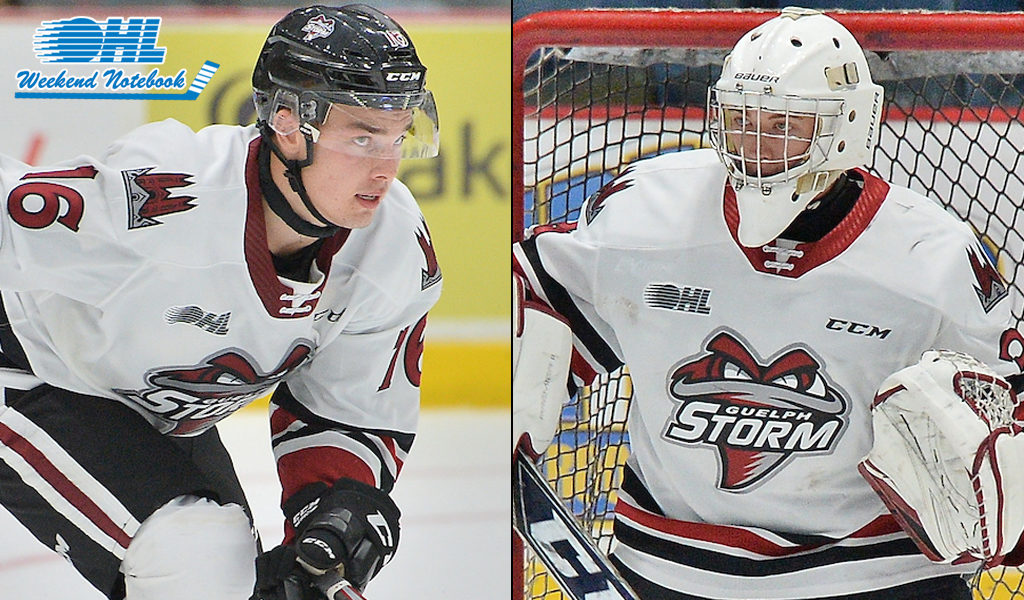 67’s propel into first place
Make it 13 straight wins for the Ottawa 67’s, who collected a couple of lopsided victories against the East Division rival Kingston Frontenacs and Peterborough Petes over the weekend, launching them to first place in the OHL.

Overaged winger Joseph Garreffa and top NHL Draft prospect Marco Rossi were forces as usual. Garreffa led the Barber Poles with a seven-point weekend that saw one goal and six assists, while Rossi tallied five goals and one helper for six points between the two tilts.

Their 6-1 win over Peterborough pushed them past the Petes for that first place seed with a league-leading 52 points on the season.

💈 The Barber Poles are back on top 💈@marcorossi2383 registers a hat trick, extends his point streak to 14 games, and @Ottawa67sHockey skates to win number 1⃣3⃣ in a row 👏 pic.twitter.com/pxD2SERTWJ

Storm round out weekend with four points
The Western Conference-leading Guelph Storm bounced right back into the swing of things after the holiday break, earning four points on the weekend in tightly fought victories over the Peterborough Petes and Hamilton Bulldogs. Third year OHLer Eric Uba led the weekend with a four-point showing that including a pair of goals to open the Storm’s 4-3 win past Hamilton on Sunday. Rookie Owen Bennett stood in net for both wins, his 12th and 13th games with the Storm, and totaled a career-high 42 saves in his squad’s 3-2 OT win over the Petes. Guelph holds 46 points atop the conference and boasts a 21-8-1-0 record on the year.

Last home game of the year was a good one! ✅#GUEvsHAM pic.twitter.com/zbTJTMtYTn

50-save showdowns
OHL netminders Ryan Dugas and Jet Greaves both had career days on Sunday, finishing their games with more than 50 saves each to their names. Dugas totaled 51 saves as his Kingston Frontenacs took a 4-2 win over the Mississauga Steelheads while Greaves of the Barrie Colts stood tall between the pipes with 52 saves in a 4-3 win. Dugas, a sophomore with the Fronts, has suited up in 17 games this season, holding an .882 save percentage and 4.31 goals against average. Greaves, also in his sophomore year with the Colts, has played 16 games between the pipes in which he’s earned an .874 save percentage and 4.20 goals against average.

Colts regain momentum
The Barrie Colts finally saw a taste of victory on Sunday after edging the Owen Sound Attack 4-3 on the road, putting an end to their eight-game losing skid. Goaltender Jet Greaves’ 52 saves highlighted the Colts’ much-needed win, while Tyson Foerster and Luke Bignell both notched a goal and an assist each. Prior to Sunday’s win, the Colts hadn’t won a game throughout the month of December, having last defeated the Hamilton Bulldogs in a 4-3 OT decision on Nov. 30.

Rangers stay strong with wins over London and Erie
The Kitchener Rangers didn’t waste any time reclaiming their spot in the W column, picking up four points on the weekend with dominant wins over the London Knights and Erie Otters. Florida Panthers pick Greg Meireles led the way with a five-point weekend (3-2-5), while teammates Riley Damiani and Jonathan Yantsis accounted for two goals and two assists each in their team’s 7-2 victory over London.

Jacob Ingham stood tall in net for both wins and currently sits fourth among OHL goaltenders with a .923 save percentage and a 2.68 goals against average.

Troops earn much needed road win
The North Bay Battalion picked up their eighth win of the season and their second win on the road, rallying past the Oshawa Generals in a 6-5 overtime decision. It was a back and forth contest that saw third-year Battalion winger Brandon Coe score his second goal of the game with 12 seconds to go on the clock, forcing an extra frame where rookie Liam Arnsby would register his second career OHL goal 2:51 in. Sunday’s OT thriller was Head Coach Ryan Oulahen’s third win behind the bench since taking over duties from Stan Butler.

The @OHLBattalion battle to the finish!@coe_44 tied things up with 12 seconds left and rookie Liam Arnsby netted the overtime winner for a 6-5 road win in Oshawa. pic.twitter.com/C3FpyBk3rL

The second-year @OHLBarrieColts winger capped off the night with his first #OHL hatty and a career-high 5⃣ point game 🎩🎩🎩 pic.twitter.com/P5v3YMDHEw

Petes fall to second with back-to-back losses
The Petes picked up one out of a possible four points over the course of the weekend, dropping to second in the league and just one point behind the leading Ottawa 67’s. The Petes and 67’s squared off Sunday afternoon in a battle for first place that resulted in a 6-1 victory on the Barber Poles’ side. The Petes’ single point came in a 3-2 OT loss to the Guelph Storm on Saturday.

Losing skids carry on for Wolves, Sting, Attack
The last couple days saw losing streaks tread on for Sudbury, Sarnia, and Owen Sound. The Sudbury Wolves, who have struggled with leading scorer and Team Canada forward Quinton Byfield out of the lineup, saw their losing skid hit game number five on Saturday as they dropped a 4-3 tilt to the Soo Greyhounds. A 4-3 OT loss at the hands of the London Knights handed the Sting their third straight defeat, while Owen Sound also dropped a third after losses to Mississauga and Barrie.