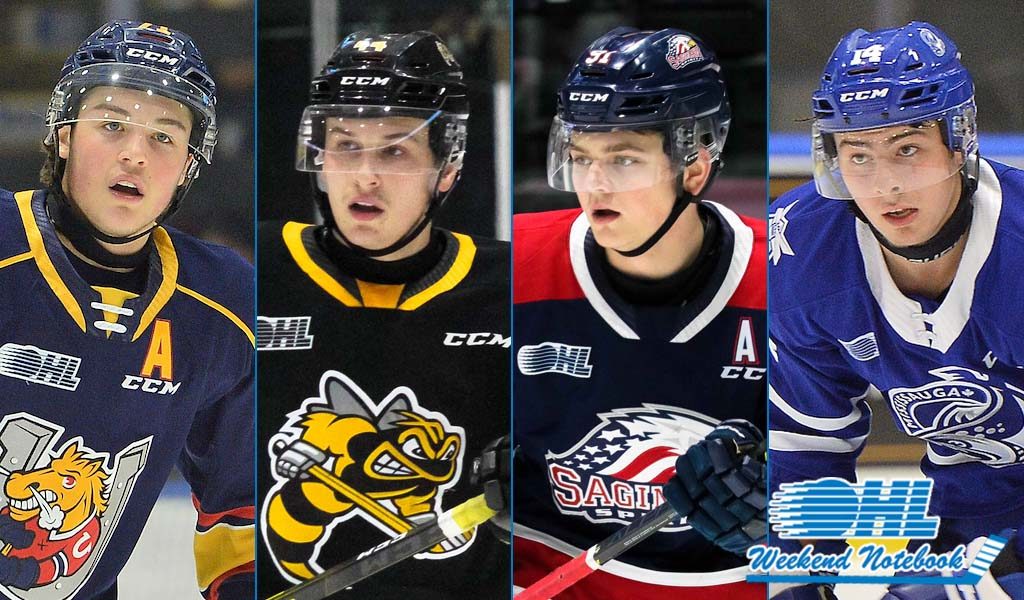 NHL Draft prospects join 30-goal club
A quartet of NHL Draft prospects in Cole Perfetti, Jacob Perreault, James Hardie and Tyson Foerster all hit the 30-goal mark over the weekend. Perfetti struck the milestone in style, scoring 1:19 into overtime to secure a 3-2 win over the visiting Guelph Storm on Saturday. The day also saw Perreault surpass the mark when he potted a hat-trick in his team’s 7-4 defeat of the Windsor Spitfires.

The Mississauga Steelheads’ 5-4 edging of the Kingston Frontenacs featured Hardie’s 30th and 31st goals. The winger opened the game’s scoring and secured the team’s win, flipping the puck past the Kingston netminder with 54 seconds remaining in the third period.

Hardie’s Barrie Colts Minor Midget teammate Foerster’s goal against Sudbury on Saturday gave him a league-leading 14th of the season on the power play.

Rookie Shane Wright, who you’ll recall only just turned 16 last month, joined his older peers in reaching the milestone back on Wednesday with a two-goal showing in a 4-3 Kingston win over the Petes, while top Flint scorer and Dallas Stars first rounder Ty Dellandrea was also welcomed to the 30-goal club when he opened the scoring in his team’s 7-3 win on Hamilton ice.

🚨3️⃣0️⃣ in the bag for @jamehardie14, in front of a solid @OHLSteelheads road crowd, too 👀

The #NHLDraft hopeful has officially doubled his rookie 🚨 total of 1️⃣5️⃣ 👏 pic.twitter.com/FOZ9RWy8M5

Firebirds burning through the record books
The Flint Firebirds’ continuous record-setting win streak rolled to its 10th game on Sunday following a perfect three-in-three weekend. Their successful road trip earned them a second accomplishment for the record books: a seven-game winning streak on the road.

Connor Roberts scored on the Erie netminder 28 seconds into overtime to keep the streak alive Friday night, while Jack Wismer netted a hat-trick the following afternoon to guide the Birds to a 7-3 win in Hamilton, and Evgeniy Oksentyuk’s four-point performance helped push his team past the Gens Sunday evening.

For the fourth time in 11 weeks a Flint player earned OHL ‘On The Run’ Player of the Week recognition, with Oksentyuk claiming the honours. The Belarusian winger posted eight points over the course of the weekend’s three games.

St. Louis Blues prospect Tyler Tucker notably notched a pair of goals after earning an assist to round out a three-point night in Oshawa on Sunday.

The Robertson streaks live on
Nick Robertson’s league-leading active point and goal streaks continued to thrive over the weekend.

The Toronto Maple Leafs pick has now found the back of the net in his last 14 games and has earned a spot on the scoresheet through 15 straight games.

He scored a lone goal in the Petes’ 4-3 loss to the host Kingston Frontenacs Wednesday before earning goals 40 and 41 in Thursday’s 8-3 blowout of the North Bay Battalion. Goal 42 came in his club’s defeat of the high flying Ottawa 67’s Saturday night as the Petes put an end to their 10-game winning streak.

Knights hit win number 10
The London Knights skated away from another week unscathed, earning wins against the Niagara IceDogs and Saginaw Spirit to push their winning streak to game number 10.

Ottawa Senators prospect Jonathan Gruden had a four-point (1-3—4) showing in Tuesday’s 5-2 win and Ryan Merkley, a San Jose Sharks pick, rounded out the week’s two-gamer with five points (1-4—5) to his name. Netminder Brett Brochu continues to rack up the wins with 13 straight.

didn’t quite make it to 40 shots but I think that killer win makes up for it😋 pic.twitter.com/Xxpxc9zEr2

Players on the move
Saginaw gets a boost and Foudy gets a shot.

London Knights’ Liam Foudy received the Columbus Blue Jackets call up on Sunday and will make his NHL debut Monday night against the Tampa Bay Lightning. With defenceman Seth Jones on injured reserve and winger Cam Atkinson sidelined with a lower body injury, Foudy’s opportunity arose. The 20-year-old winger was drafted 18th overall by the Blue Jackets at the 2018 NHL Draft.

Co-Captain Liam Foudy (@foudshow) has been called up by the @BlueJacketsNHL on an emergency basis!

He will make his @NHL debut tomorrow against the @TBLightning 🏒 pic.twitter.com/k1cUKRulDg

It was announced the Saginaw Spirit will get yet another welcome addition to lineup amid their already encouraging season in defender Bode Wilde, who was reassigned from the Bridgeport Sound Tigers Monday. The 20-year-old defenceman had recorded a pair of assists through 20 games played in an injury-shortened campaign.

Wilde, who was picked up by the New York Islanders in the second round of the 2018 NHL Draft, amassed 70 points with the Spirit last season.

Rangers back to winning ways
Following a rare regulation loss, Kitchener didn’t waste any time bouncing back into the win column. Three times, to be exact.

The Rangers earned a trio of wins on the week and netted seven goals in two of them. After edging the Soo Greyhounds 5-4 on Wednesday, the team blew past the Mississauga Steelheads 7-1 – a match that saw goaltender Jacob Ingham stop 39 of 40 – before blanking the Sarnia Sting 7-0 on Sunday.

Rookie Declan McDonnell had a weekend for the books, obtaining six goals (including his first career hat-trick) over the three-game span.

The @OHLRangers have just two regulation losses since Nov. 23 and have vaulted themselves to the top of their conference.

How’d they do it? @bradcoccimiglio addresses that and more in his weekly CHL notebook ⤵️https://t.co/Ey8eDCmD2j

Owen Sound goes on the Attack
The Attack stretched their winning streak to three with a pair of road wins this past weekend.

Their explosive 11-1 win over the Niagara IceDogs saw a hat-trick and four-point showing from Kaleb Pearson, and another four points from captain Aidan Dudas, a Los Angeles Kings draftee.

The Attack then went on to defeat the Erie Otters 4-3 as Pearson found the back of the net two more times to wrap up a six-point week.

The Bears, who are without overage winger Matthew Philip to injury, currently sit sixth in the Western Conference, tied with the Guelph Storm at 56 points with a four-point cushion between them and the eighth place Otters.

The #OHL sophomore scored a trio in an explosive night for @AttackOHL 🐻 pic.twitter.com/DeHnKY7Gft

Central Division a tight race
The Central Division race continues to be a tight one, as the Sudbury Wolves, Mississauga Steelheads, and Barrie Colts failed to create much separation over the weekend.

The Wolves, who continue to maintain the top seed, came out of their three-in-three with four out of six points, defeating two division rivals in the Colts and the Niagara IceDogs with hat-tricks from both Matej Pekar and David Levin.

The Steelheads were unable to get the leg up on the Colts, falling 5-4 in overtime on Thursday, before being blown out by the likes of the Kitchener Rangers 7-1 the following night. They’d earn their only spot in the win column Sunday afternoon, when James Hardie halted a Kingston comeback in the game’s final minute. Their three points earned allowed the Wolves to widen their point cushion to three.

A loss to the Wolves and a win over the Fish earned the Colts two points, leaving them trailing behind Mississauga by just as many for third in the Division.

67’s meet their match in Petes once again
The Ottawa 67’s hit a bump in the road when they fell to the East Division rival Peterborough Petes 4-1 on Saturday night. Ottawa has now dropped only two of their last 29 games, and both losses have come against Peterborough, who sit directly beneath them at second in the East Division. The Barber Poles last fell in a 4-0 blanking on Jan. 11. The Petes own a 4-1-1-0 record against Ottawa through six meetings this season.

Ottawa, who lead the OHL standings by a significant margin, were unsurprisingly able to land right back on their feet the following afternoon with an explosive 9-1 barrage over the North Bay Battalion, led by Jack Quinn’s six point performance that saw the addition of a 44th goal to his league-leading total.

Sarnia finally stings their opponent
Jacob Perreault’s aforementioned hat-trick not only lifted him past the esteemed 30-goal marker (a feat he’s now achieved in both of his OHL seasons), it also helped the Sarnia Sting smash a nine-game losing skid.

The Sting came out on top Saturday in a trip to Windsor, skating past the Spits in a 7-3 contest. Carolina Hurricanes pick Jamieson Rees was an integral force in his squad’s win registering three assists, while leading Sarnia scorer Sean Josling also put up a three-pointer (1-2—3) to reach a season total of 70 (31-39—70).