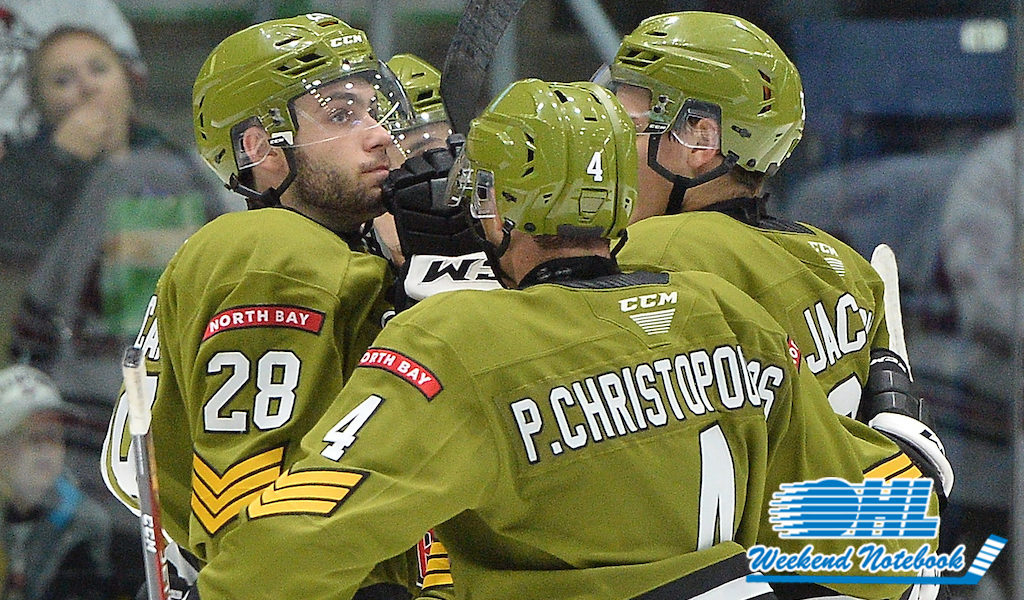 Troops collect five of six points in front of Vrbetic’s strong play
Rookie netminder Joe Vrbetic had a monster weekend between the pipes as his North Bay Battalion wrapped up their last three games with five points earned.

Mitchell Russell put up three points (1-2—3) last Thursday as the Troops were edged by the Sarnia Sting 5-4 in overtime. They bounced back with a 4-0 blanking of the Barrie Colts that saw Vrbetic record 41 saves for his first OHL shutout. The following afternoon, he stopped 38 of 40 attempts in a 3-2 overtime over the Mississauga Steelheads, capped off by Simon Rose’s game winning goal 4:32 into the extra frame. Russell wrapped up the three-game appearance with six points (3-3—6) to his name.

6-foot-6 @JoeVrbetic54 stopped all 41 shots that came his way for his first #OHL shutout, helping the @OHLBattalion snap an eight-game drought. pic.twitter.com/COrNDjqHpF

Another record afternoon for the Firebirds
The Flint Firebirds continue to shatter club records as they roll to their 13th straight win in a powerful 12-7 victory over the Sarnia Sting. Their 12 goal showing set a new record for goals scored in a single game, and their ninth straight win on the road is also a new stretch for the club.

The explosive win was led by St. Louis Blues prospect Tyler Tucker, who put up a pair of goals and five helpers for a career-high seven point showing and a +8 finish. Five of those points came in the opening frame.

Tucker’s seven point shattered the club’s previous record for points by a defenceman in a single game, which was four in 2019, and tied Kole Sherwood’s record-setting seven-point game in 2017 for most points by a Firebirds player. Rookie Brennan Othmann’s 30th point earned on the afternoon was another welcome addition to the record book.

We broke 5 records in one game today 😏 #ThisIsFlint

The playoff bound Petes
The Peterborough Petes became the second team to punch their postseason ticket.

They join the Ottawa 67’s as the only other team with a guaranteed playoff spot after the Barber Poles earned their slot on Feb. 2.

The maroon and white are in the hunt for their 10th Robertson Cup title. pic.twitter.com/n8YWN880WE

Knights leading the way
The Knights are back on the upswing with three straight appearances in the win column.

Following a 3-1 loss to the Guelph Storm on Tuesday, the Knights were able to shake it off and claim a big two points against Kitchener, Kingston and the top seeded Ottawa 67’s over the weekend.

They continue to lead the Western Conference with a 37-14-1-1 record to their name. Both San Jose Sharks pick Ryan Merkley and Columbus Blue Jackets prospect Liam Foudy, who returned to the lineup following a two-game debut with the Jackets, notably ended their three-game stints at the height of a nine-game point streak. Merkley’s produced 17 assists and 19 points over those nine games, which included a four-point appearance in his team’s 6-3 win over the Rangers, while Foudy has put up eight goals and 17 assists in the same amount of time.

Fun first couple of NHL games!Dream come true! Thanks Columbus for the opportunity and support. pic.twitter.com/fWs8LM3WsW

Storm surging ahead
Things are going the Guelph Storm’s way as they roll out of the weekend on a six-game point streak.

The Storm spoiled the Knights’ win skid last Tuesday with two late goals from Eric Uba before blanking the Owen Sound Attack 2-0 later in the week. Flint edged them in a shootout the following night, but they hopped right back on top days later with Danny Zhilkin’s eighth round shootout goal on the Soo Greyhounds.

Robertson takes control
Nick Robertson took control of the CHL goal scoring race when he earned goals 45 and 46 as part of a four-point performance in his team’s 5-2 defeat of the visiting Sudbury Wolves.

The Toronto Maple Leafs prospect boasts a 72 point total in just 40 games played, and continues to add to his point streak that reached its 18th game for which he’s produced 23 goals and 37 points.

The @MapleLeafs pick netted the pair in front of a home crowd as his playoff bound @PetesOHLHockey collected another win ⬇️ pic.twitter.com/Y9UgZPDcjF

The 16-year-old netted his 34th goal on the year in a 5-2 loss at the hands of the visiting Sudbury Wolves on Monday and currently rides a nine game point streak in which he’s amassed an even nine goals and nine assists for 18 points.

His 34 goals are also the most from an exceptional status skater since John Tavares‘ 45 with the Oshawa Generals during the 2005-2006 season.

Perfetti puts up the points
Highly anticipated NHL Draft hopeful Cole Perfetti had yet another weekend performance worthy of high praise. The Saginaw Spirit managed to pick up four of six points over the course of the week, falling to the high flying Firebirds 5-4 in between offensive surges on the Greyhounds and Rangers in between.

Perfetti, who was named OHL ‘On The Run’ Player of the Week on account of the accolade, put up a whopping 10 points over his last three games. He notably produced five assists in his team’s 7-5 defeat of the Soo Greyhounds, tying similar franchise tallies earned by Vincent Trocheck in March 2012 and Marcus Crawford in January 2017. He followed up the career-high with his first hat-trick of the season in that 5-4 loss, but finished out the weekend with a goal and an assist in an 8-2 blowout of the Rangers.

He now owns 97 points on the season, and also received acclaim over the weekend when he became the fastest player in Spirit history to reach 100 career assists.

Colts creep past the Fish
The tightly matched Central Division saw some movement over the weekend as the Colts surpassed the Steelheads for the second place slot.

Barrie took six out of eight possible points throughout the week, edging the Otters 4-3 in overtime before skating past the struggling Niagara IceDogs in a 4-1 contest. They’d get shutout by the Battalion Saturday but defeat the Kingston Frontenacs 5-2 on Family Day afternoon led by a first ever Evan Vierling hat-trick.

The sophomore skater’s first career trio had a big hand in fueling victory for @OHLBarrieColts over in Kingston 🐴 pic.twitter.com/JbPVyjIreG

The Fish dropped all three weekend road matches, falling in close matchups to Ottawa and North Bay before suffering a 4-0 blanking to the Erie Otters on Monday.

Ottawa hits a road bump
The Ottawa 67’s were dealt a rare slice of adversity, ending the long weekend on a two-game losing streak for the first time since early October.

The Spitfires edged the Barber Poles in a Sunday afternoon shootout, where 2020 NHL Draft hopeful Will Cuylle netted the lone goal in the third round. In doing so, Ottawa fell on home ice for the first time since Nov. 8.

The following afternoon saw the 67’s lose at the hands of the Western Conference leading London Knights by a 4-2 tally, in which the Knights’ Jonathan Gruden and Liam Foudy potted late third period goals to secure victory.

The two losses come after a close tilt with the Mississauga Steelheads. Top NHL Draft pick Marco Rossi wrapped up the weekend at a league-leading 99 points.

The lone shootout goal belongs to @willcuylle, who sends @SpitsHockey home from Ottawa with a victory ✈️ pic.twitter.com/g5otbSnigD