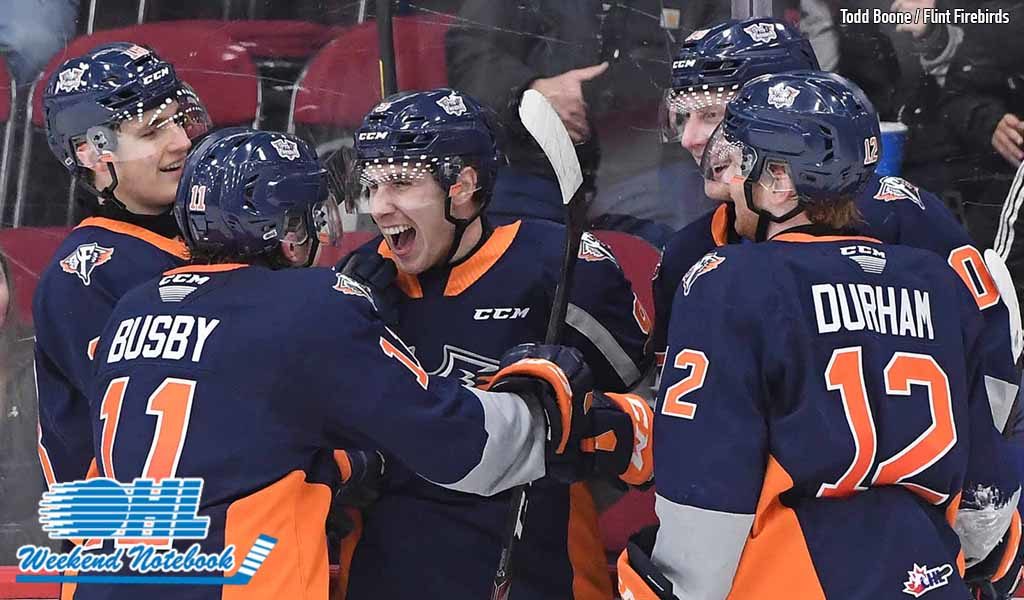 Firebirds keep winning, making history
The longest winning streak in club history continued on as the Firebirds captured their seventh straight win in a 5-3 contest against the Western Conference leading Kitchener Rangers. The win saw a three-point performance from Jack Wismer that included two goals.

The Firebirds kicked off their perfect weekend with a lopsided 8-3 defeat of the Windsor Spitfires that featured a four-point performance from Dallas Stars prospect Ty Dellandrea (2-2—4) and another two goals from Wismer. Friday’s 4-3 edging of the Erie Otters was led by a hat-trick from the club’s all-time point producer among defencemen Riley McCourt, ultimately winning the game in OT.

67’s first to punch playoff ticket
The sizzling Ottawa 67’s became the first team to clinch a postseason berth on Sunday afternoon after they defeated the Soo Greyhounds 5-2 for their ninth consecutive victory. With wins in 26 of their last 27 matchups, they continue to fly high above the Canadian Hockey League standings with an unmatched 39-7-0-0 record.

The defending Bobby Orr Trophy recipients are hungry for more in 2020. pic.twitter.com/y39H2iRVdm

McMichael, Brochu, Knights keep surging
Two more big weekend wins pushed the London Knights to nine in a row. Friday’s 7-4 toppling of the rival Windsor Spitfires came with Washington Capitals first rounder Connor McMichael’s sixth hat-trick of the season in a four-point night. They followed it up with a 5-2 victory over the struggling Sarnia Sting led by  a three-point showing from San Jose Sharks draftee Ryan Merkley.

McMichael skated away from the weekend with seven points and a plus/minus rating of plus-4 to earn ‘On The Run’ Player of the Week status for the third time this season. His 83 points (37-46–83) place him third among all OHL skaters, and high atop his fellow Knights skaters with a 26-point margin between that and Merkley’s 57 points (12-45–57).

Brett Brochu stood between the pipes in Friday’s victory, earning his 11th straight win, while Mathias Onuska took to the crease on Saturday for the second time this season, earning his first career OHL win.

Steelheads no match for division rivals
The Steelheads continue to trudge up the Central Division with high-scoring offensive displays along the way. This weekend’s successes were led by St. Louis Blues prospect Keean Washkurak’s six-point showing in Sunday’s explosive 10-3 win over the Sudbury Wolves, of whom they’re seeking to catch in the Division race. James Hardie, eligible for this summer’s NHL Draft, rounded out the weekend with five points to his name (3-2—5).

Florida Panthers pick Cole Schwindt put up seven points over his team’s two wins, including four assists in Friday’s 6-2 defeat of the North Bay Battalion, and overager Calvin Martin netted a hat-trick as part of a four-point performance in Sunday’s blowout.

First #OHL hat-trick for @calvin_martin5 came in a big win as the @OHLSteelheads put up double digits to climb within two points of first in the Central 🎩🎩🎩 pic.twitter.com/QPHD4lqMtr

Colts continue to rally
Thing are still looking up for the Barrie Colts, whose three-in-three weekend banked them five points. They fell to the Sudbury Wolves 3-2 on Thursday, with credit to Quinton Byfield for both the tying goal and overtime winner, but were able to skate past the Niagara IceDogs and Kingston Frontenacs in the games that followed.

Brandt Clarke’s talents were on full display. The rookie defenceman put up six points in his last two games, including four helpers in an 8-2 toppling of the IceDogs. Tyson Foerster, hoping to hear his name called at the upcoming NHL Draft in June, continues to make an impressive case for himself with a six-point weekend (3-3—6).

Streaking Rangers stopped in Flint
The Kitchener Rangers were handed their first regulation loss in 16 games when they fell to the Flint Firebirds 5-3 on Saturday.

Storm turn things around up north
The Guelph Storm entered a northern road swing with losses in 10 straight games, but managed to stop the bleeding with back-to-back wins in North Bay and Sudbury.

Keegan Stevenson scored the late third period game winner as the Storm defeated the Battalion 4-3 on Thursday night. Guelph took the play to North Bay, outshooting the Troops 35-20 as Cam Hillis and Pavel Gogolev both picked up assists.

The Storm defeated the Sudbury Wolves 5-2 on Friday as Gogolev led the way with two goals and an assist. Nico Daws stopped 32 of 34, giving him a pair of weekend victories as he returned to form following his Canadian World Junior experience.

No time wasted for @Storm_City 🔥

Down 2-0, the Storm got right back into it with three quick goals in the opening frame, capped off by @daniilchayka55 ⬇️ pic.twitter.com/gyO4Tov39K

Robertson’s goal-scoring streak continues
The Petes have found themselves in and out of the win column as of late, but one thing has remained consistent: Nick Robertson’s ability to find the back of the net. The Toronto Maple Leafs prospect had four goals in his club’s three-in-three this past weekend, capping off a 15 goal showing over 11 straight games. Over the course of 34 games this season, Robertson has amassed 38 goals and 57 points.

There’s no margin for error when @nickrob2001 is bearing down on you 👀 @MapleLeafs prospect scores in an 11th straight game, the longest such streak in the #OHL this season as @PetesOHLhockey got off the schneid. pic.twitter.com/7AY6WiIbM9

Otters and Greyhounds eyeing eighth place spot
The playoff window remains tight in the Western Conference, with the Erie Otters and Soo Greyhounds vying for the eighth and final playoff position. As it stands, the Otters sit eighth with 49 points to their name, having come out of the weekend winless. They fell to the likes of three Western Conference opponents in Owen Sound, Flint, and Saginaw, and now see a 4-5-1-0 tally through their last 10 games.

The Greyhounds were able to nab four out of six possible points over the course of the weekend, coming out on top against the Peterborough Petes and Kingston Frontenacs before facing a tough opponent in the unstoppable Ottawa 67’s. Still, they own a similar record of 4-6-0-0 in their last 10, trailing one point below the Otters.

We keep it close all night but can’t hold on in the final minutes.#ReleaseTheHounds pic.twitter.com/UxO53hgX6g

Windsor winds up winless
The Spitfires’ opponents gave them a run over the course of the weekend’s three-in-three, leaving them with zero points to their name as they drop to fourth in the Western Conference. The Spits, who entered the weekend ranked ninth in the Canadian Hockey League, were no match for the Firebirds on Thursday, falling by a score of 8-3, before dropping 7-4 to the surging Knights the following evening. They’d conclude their weekend with a 6-2 defeat at the hands of the Owen Sound Attack on Saturday. They’ll hope to bounce back on Thursday when the Hamilton Bulldogs arrive in town ahead of a home-and-home with the eighth place Sarnia Sting.