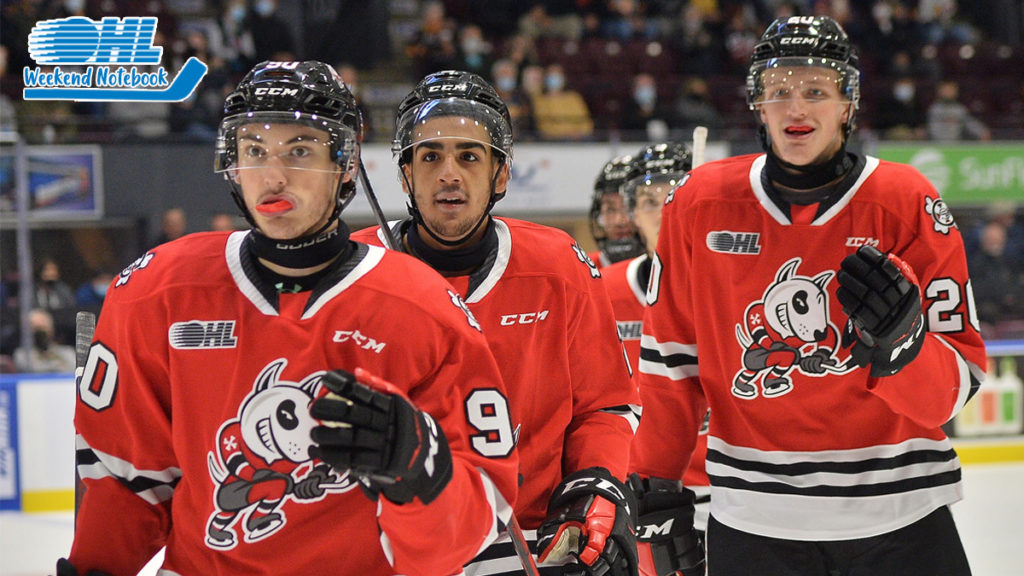 IceDogs back-to-back wins
The Niagara IceDogs had a victorious week and have now strung together their first three-game winning streak of the season. Josh Rosenzweig was the star on Thursday, making 34 saves in his first career OHL shutout as the Dogs blanked the Oshawa Generals 5-0. The IceDogs continued on their winning streak with a 5-4 win over Sudbury where Liam Van Loon earned first star honours with a pair of goals while Danil Gushchin, Aidan Castle and Dylan Roobroeck each had a goal and an assist. The win draws Niagara even with Sudbury in the Central Division standings, owning a 9-16-0-1 record, three points out of a playoff spot. The success has come even in the midst of saying goodbye to captain Cameron Butler, who was dealt to the Oshawa Generals last week.

Josh Rosenzweig is no stranger to the highlight reel 📽️@OHLIceDogs netminder with a few dandies in Saturday’s victorious 35-save performance against Sudbury. pic.twitter.com/q5K6XUTEf1

Spitfires halt Greyhounds, pull to within two points of first in West Division
The Windsor Spitfires put an exclamation mark on a successful weekend in Sault Ste. Marie, hanging up 10 goals on Sunday afternoon. This after the Spits defeated the Greyhounds 5-2 on Saturday. Sunday’s victory saw Windsor pull themselves within two points of first place in the West Division as Will Cuylle had two goals and two assists. Dallas Stars prospect Wyatt Johnston, who was the OHL’s Player of the Month for December, took home Player of the Week honours with a goal and three assists in both outings. Johnston’s now has 37 in his last 14 games, tying him for second in OHL scoring with 54 points (20-34–54) over 29 games. Newly acquired blueliner Andrew Perrott had an assist in each of his first two games with Windsor. The Spitfires have won eight of their last 10, improving to 16-9-2-2.

Josh Rosenzweig is no stranger to the highlight reel 📽️@OHLIceDogs netminder with a few dandies in Saturday’s victorious 35-save performance against Sudbury. pic.twitter.com/q5K6XUTEf1

Otters picking up the pace
The Erie Otters have now won four in a row, coming off back-to-back wins over division rival Kitchener at The Aud on Friday and Saturday. Leading scorer Elias Cohen factored into both wins with a goal and an assist in each. Netminder Nolan Lalonde now leads OHL rookies with nine wins this season, making 67 saves on the weekend to earn OHL Goaltender of the Week honours. Blueliner Christian Kyrou had two points on Sunday, and has produced two points in four of his last six outings to give him 22 (6-16–22) through 28 games to lead Erie defenders offensively. The Otters enjoyed their weekend success without Vancouver Canucks prospect Connor Lockhart in the lineup. Erie sits five points back of the last playoff spot in the Western Conference.

Mark it down as another win for the good guys!#FourStraight pic.twitter.com/iV7fz2rmn2

Colts go seven in eight
The Barrie Colts defeated the Owen Sound Attack 7-3 on Sunday, giving them seven wins in the past eight games. Newly acquired winger Declan McDonnell scored in his Colts debut while Ethan Cardwell lit the lamp twice and Brandt Clarke had three assists. Veteran blueliner Nathan Allensen suited up in his 200th career OHL regular season contest. Matteo Lalama made consecutive starts for Barrie after having not seen the crease since Nov. 28th. The Colts sit fifth in the Eastern Conference with a 15-7-3-0 record, but have played just 25 games, the fewest in the OHL.

We have determined that @CooperMatthews_ has eyes in the back of his head. 😯#BackInTheSaddle pic.twitter.com/eibJ0qp5eo

Sting victorious in return from extended break
The Sting prevailed in their first action since Dec. 12th, snapping a four-game slide on home ice as Nolan Burke scored twice in a 5-3 win over Flint on Saturday. Rookie defenceman Alexis Daviault scored his first career OHL goal for Sarnia, kicking-off a run of three Sting second period goals in a 40-second span. Tied at three, Boston Bruins prospect Ryan Mast scored his fourth of the season for the game winner. The Sting improve to 11-12-3-0 at the bottom of the West Division after saying goodbye to veterans Brayden Guy and Ashton Reesor who were dealt to the Guelph Storm. Coming in as fresh faces, Marko Sikic and Chandler Romeo made their Sarnia debuts on Saturday.

Steelheads become first team to 20 wins
The Mississauga Steelheads became the OHL’s first team to reach the 20-win mark last week, and the first to earn 10 win both at home and on the road in defeating the Peterborough Petes 5-2 on Sunday. Jake Uberti recorded a goal and an assist in his Steelheads debut, joining Owen Beck and Luca Del Bel Belluz with one and one as James Hardie extended his goal-scoring streak to five games finishing with two goals and an assist. The Steelheads earned a point in a seventh straight game, improving to league-best 21-7-1-2.

Owen Beck’s at it again 😳

The @OHLSteelheads first year forward and 2022 #NHLDraft prospect extends his lead in the rookie scoring race to give the Trout a 4-1 lead after 40 minutes! 📽️ pic.twitter.com/XwZuik4WtY

Knights post back-to-back six-goal efforts
The London Knights returned from an extended break, earning their first win of 2022 bringing in back-to-back six-goal efforts in a 6-1 win versus Flint on Friday night, and a 6-2 win against Kitchener on Sunday. Brett Brochu stopped 27 of 28 in his first action since Dec. 7th on Friday. Dallas Stars prospect Antonio Stranges led the way on Sunday with two goals and two assists, while Montreal Canadiens prospect Logan Mailloux scored the first two goals of his OHL career as the Knights improved to 4-0 against Kitchener this season. London’s other recent blue line addition, 6-foot-5 Kirill Steklov, scored his first goal of the season 14 seconds into Sunday’s matchup. London leads the Western Conference with a 19-8-1-0 record.

Battalion battle beyond regulation
The North Bay Battalion battled beyond regulation in two straight games, defeating Mississauga 4-3 in a Thursday shootout before besting the Barrie Colts in a 3-2 overtime triumph on Saturday. After Mitchell Russell scored his first career OHL hat trick on Thursday, the win over Barrie on Saturday saw Kyle McDonald score his first goal in Battalion green while Edmonton Oilers prospect Matvey Petrov tallied his 21st of the campaign. San Jose Sharks prospect Brandon Coe scored his 21st goal of the season on a wraparound 1:51 into overtime to secure the second win of the week for the Battalion. North Bay improves to 18-11-2-2, three points back of first place Mississauga in the Central Division.

Happy Monday, here’s something to brighten your day 👇 pic.twitter.com/P2al3slDHQ

Firebirds take the I-75 Cup lead
The Flint Firebirds took a 5-4 lead in the I-75 Divide Cup, defeating Saginaw 4-1 on Wednesday night. Brennan Othmann celebrated his 19th birthday scoring his 22nd goal of the season, while Amadeus Lombardi scored in a third straight game for Flint. Luke Cavallin stopped 30 of 31 shots, earning his fifth win in the last eight starts. Following road losses to London and Sarnia on Friday and Saturday without Othmann in the lineup, the Firebirds are 15-12-0-2, six points back of first place Sault Ste. Marie in the West Division.

A 2-point night for the birthday boy 🚨🍎🎂 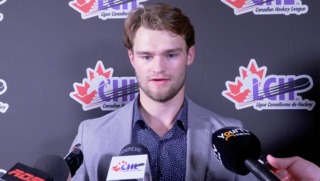 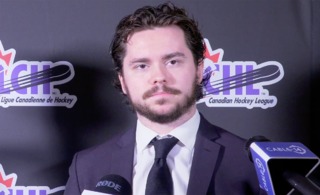