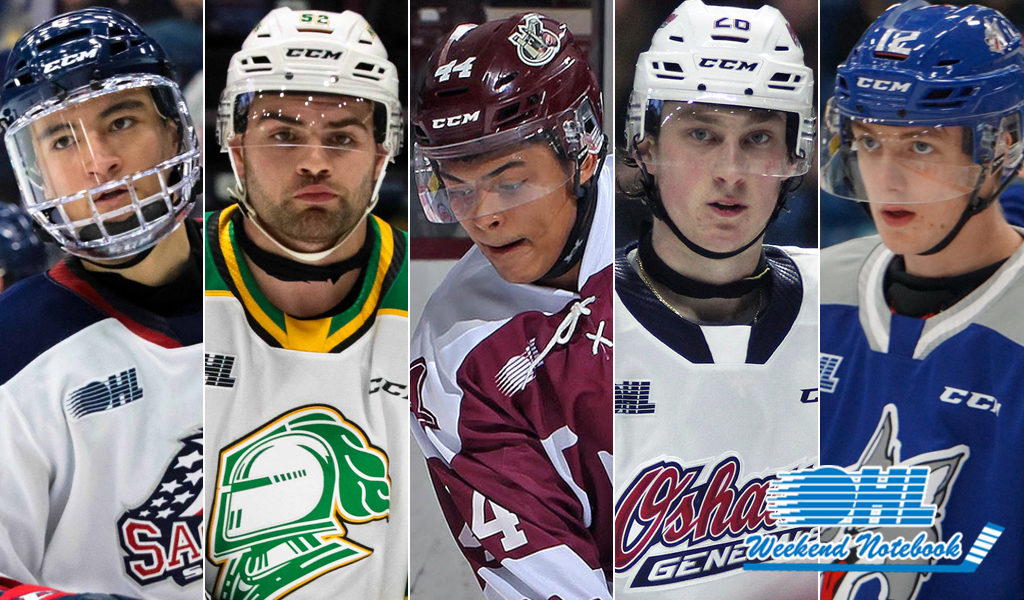 Streaks halted in Ottawa
After setting a new franchise record with 17 straight wins, the Ottawa 67’s saw their streak come crashing down at the hands of the East Division rival Peterborough Petes in a 4-0 shutout on Saturday.

Their scoreless performance also saw the end of lengthy point streaks from leading OHL scorer and top NHL Draft prospect Marco Rossi who had amassed 47 points (21-26-47), in 18 games dating back to Nov. 10, and overager Joseph Garreffa, who had posted 43 points (17-26-47) in 19 straight games.

The Barber Poles were able to shake it off and bounce right back to their winning ways on Sunday afternoon, defeating the Owen Sound Attack in a 7-4 decision that included NHL Draft hopeful Jack Quinn’s second hat-trick in only five games, rounding out their three-in-three weekend with four points. Quinn, who’s been ranked ninth in the newly released NHL Central Scouting’s Midterm Rankings for North American skaters, netted three in his team’s 6-3 win over the Kingston Frontenacs on Jan. 2. The Barber Poles continue to sit atop the OHL standings with a league-high 62 points.

Spits bounce back into Western Conference’s top spot
The Windsor Spitfires may have finished the weekend with only three points out of a possible six, suffering a loss to Oshawa on Thursday followed by an overtime loss at the hands of Flint, but their 5-4 overtime win over the Kitchener Rangers pushed them back into the Western Conference’s first place spot with 55 points so far this season.

And just like that, @SpitsHockey are back on top of the Western Conference ✈️@PredsNHL pick @AfanasyevE11 buries the OT winner off a perfect pass from @Angle89Tyler 👌 pic.twitter.com/JuGqQuEasC

McMichael scored a hat-trick on Saturday, his fourth of the season, before scoring two more goals on Sunday, one of which was a highlight-reel between the legs display. He totaled seven points in three games over the weekend and earned a spot in the OHL’s Three Stars on both Saturday and Sunday.

Can you believe the skill on @con91mcmichael?! 😱

You’re going to want to see this one, @capitals! pic.twitter.com/p2N61nlaHP

The 18-year-old native of Brest, Belarus stretched that streak to its 16th game the following night when he found the back of the net midway through the first period to open the scoring in an eventual 4-3 OT win over the Windsor Spitfires.

His now 16-game run surpasses the club’s previous record set by Kole Sherwood during the 2016-2017 season.

Etch it in the books!

That’s 1️⃣5️⃣ straight games with a point from @ev_oksentyuk, a new @FlintFirebirds record 🔥

Wolves’ Pekar-Byfield connection off to strong start
The Sudbury Wolves’ weekend saw offensive surges in wins against the Barrie Colts and North Bay Battalion over the weekend in large part thanks to newly acquired forward Matej Pekar’s seven-point weekend that included five assists in Saturday’s 8-2 blowout of the Troops.

Top NHL Draft prospect Quinton Byfield also had a triumphant return to the Wolves lineup following his gold medal performance with Team Canada at the World Juniors, notching a point in Thursday’s shutout of Barrie before putting up two goals and three assists for his second five-point performance this season in Saturday’s win, a feat that earned him CHL Player of the Night honours. NHL Central Scouting’s Midterm Rankings have Byfield listed second among all North American 2020 draft hopefuls.

The club fell to the Mississauga Steelheads by a 3-1 tally Sunday afternoon, with Pekar recording the lone goal.

#CHL Player of the Night is top #NHLDraft prospect @byfield55 of @Sudbury_Wolves with his second 5️⃣ point performance of the @OHLHockey season playing in just his second game back from #WorldJuniors gold: https://t.co/6EIyoWgGx8 pic.twitter.com/twLQqtJ8QQ

Tomasino’s dazzling debut in Oshawa
Nashville Predators first rounder Philip Tomasino has proven to be an impactful addition to the Oshawa Generals roster, helping them to three straight wins with consistent multi-goal nights along the way.

The newly acquired centreman posted two goals and three assists for five points in his Thursday night debut, a 6-3 defeat of the Windsor Spitfires, landing him OHL first star honours.

He notched another pair of goals in Friday’s tilt with the Sarnia Sting, helping his team to a 4-3 victory, and then two more in Sunday’s 6-4 victory over the visiting Peterborough Petes.

His outstanding performance saw his point streak stretch to 10 straight games and earned him the title of OHL ‘On the Run’ Player of the Week. With 67 points (28-39-67) through 39 games, Tomasino sits fifth in points among all OHL skaters.

Streaks continue for Gogolev, Castleman, and Perfetti
In company with Tomasino and Oksentyuk, double digit point streaks continued to lengthen across the league.

With four straight losses, the Guelph Storm have had a tough time coming out on top recently, but leading scorer Pavel Gogolev has continued to register points in every game, widening his streak to 14, a span in which he’s totaled 17 goals and 11 assists for 28 points.

In similar fashion, the Niagara IceDogs haven’t seen much puck luck lately, having also dropped their last four games. Fourth year OHL vet Oliver Castleman, however, has put up points in each of his last 14 games for a 23-point total that has seen him produce nine goals and 14 assists.

Highly touted 2020 NHL Draft pick Cole Perfetti is also one of the latest players to reach double digits as far as point streaks go. With a goal and three assists in Saginaw’s 6-5 edging of the London Knights over the weekend, Perfetti reached his 11th straight game in which he’s found his name on the scoresheet. He boasts eight goals and 16 assists for 24 points throughout the run, and his 69-point total, in which he’s amassed 23 goals and 46 assists, places him third in OHL scoring. It was announced today that NHL Central Scouting has Perfetti ranked fourth in their Midterm Rankings ahead of the NHL Draft in June.

That’s a career high in 🚨 for Gogo! 🌪 #IamtheSTORM pic.twitter.com/BYKRIYqHc5

Akil Thomas welcomed to Peterborough
It’s been a busy week for Akil Thomas, who returned to the league on the heels of the goal heard around the country that earned Team Canada the gold medal at the World Juniors in a 4-3 win.

The Los Angeles Kings prospect was honoured ahead of Niagara’s matchup with the Hamilton Bulldogs on Thursday, before receiving a warm welcoming to the Peterborough Petes the following day. He kicked off his weekend debut in the maroon and white jersey with five points in two games.

Thomas picked up an assist in the Petes’ 4-0 blanking of the 67’s that effectively ended the club’s 17-game win streak. The next night, the centreman registered another goal and three assists in a 6-4 loss to the neighbouring Oshawa Generals.

Get used to this, @PetesOHLHockey fans 😎@LAKings draftee @AkilThomas2 redirects @hudson_wilson18‘s shot for his first goal in the maroon and white ⬇️ pic.twitter.com/JbMgPuiDEE

Sting snap losing slump
The Sarnia Sting finally got a taste of victory over the weekend when they edged the Hamilton Bulldogs in a 4-3 shootout win. Leading Sting scorer and NHL Draft hopeful Jacob Perreault, who has been ranked 17th among North American skaters in NHL Central Scouting’s Midterm Rankings, put up a goal and an assist before scoring in the shootout to seal his club’s first win since Dec. 14.

The club closed out their three-in-three weekend with a 6-2 loss to the Erie Otters, and with a record of 16-22-4-0 through 42 games played so far this season, they continue to sit at fifth place in the West Division.

Sting snap out of their slump with a big 4-3 Shootout Win in Hamilton!@LeonsFurniture is back with your Game Story from a victorious Saturday in the Steel City : https://t.co/5EZE2LLCPD@LeonsFurniture – Part of the Family pic.twitter.com/8wilXWiRCQ

Spirit starpower continues to dominate
The Saginaw Spirit put up 11 goals in two games over the weekend, skating past the Flint Firebirds and London Knights for two consecutive appearances in the win column.

Coming off a two-goal performance the night before in Flint, OHL veteran and New York Islanders prospect Cole Coskey netted a hat-trick in Saturday’s tightly fought tilt with the Knights to cap off his five-goal weekend. Minnesota Wild pick Damien Giroux also impressed in Friday’s matchup with the Firebirds with a pair of goals before notching one more the next day. Cole Perfetti contributed to both wins with an overall five-point (1-4-5) showing.

Carolina Hurricanes first rounder Ryan Suzuki joined the squad on Saturday, and also had a hand in both wins with three assists in two games.