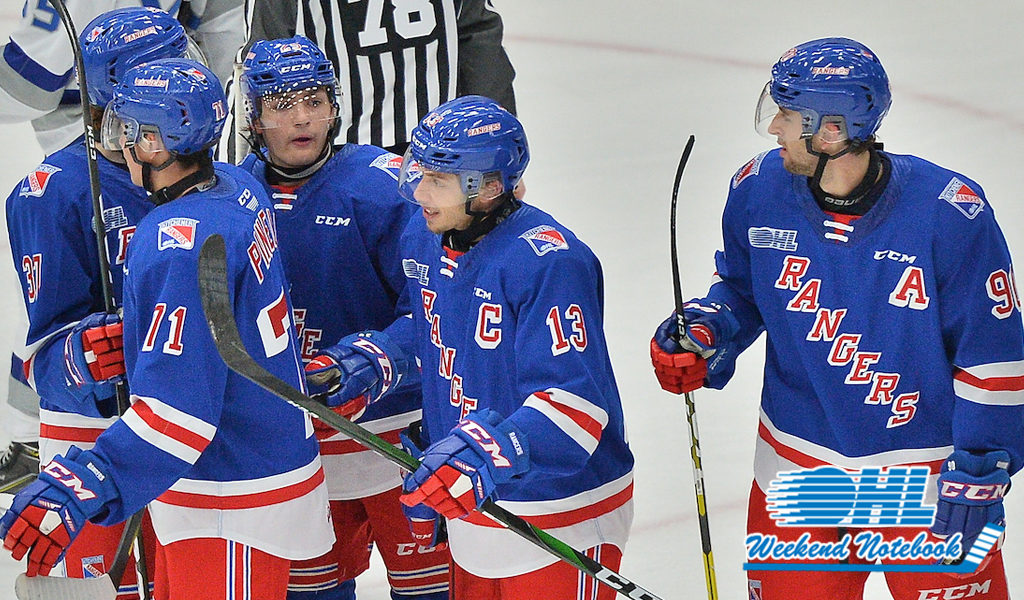 Rangers’ run lands them top spot in Western Conference
The Kitchener Rangers soared to the top of the Western Conference following their perfect weekend that ended on the heels of a back-to-back with the Midwest rival Guelph Storm. The Rangers clawed back from a 3-0 deficit to edge the Storm to a tightly fought 5-4 win to reach 60 points on the season, after doubling up on them 6-3 Saturday night. Prior to that, the Rangers put on an offensive display in a 9-2 barrage over the North Bay Battalion; a performance that boasted two-goal showings from Dallas Stars pick Riley Damiani and Florida Panthers pick Greg Meireles. Another two goals came from Meireles in Saturday’s tilt.

The Rangers have dropped only three games since Mike McKenzie took over as head coach following Jay McKee’s dismissal in late November. They hold a 20-1-2-0 record dating back to Nov. 28.

When the captain comes in clutch 👑@DallasStars pick @rileydamiani nets the go ahead goal with a stunning redirect in the game’s final minutes. It’s the @OHLRangers‘ first lead of the game, and they’ll carry it to the buzzer ⏱️ pic.twitter.com/jKi3O7UREy

.@jackquinn_19‘s league leading 35th goal of the season helped propel the #67s over the Generals last night on the road.#NoQuit pic.twitter.com/UZty6QRyay

67’s tack on to new win streak
The 67’s remained perfect, netting five goals in all three wins this past weekend. They extended their new win streak to four straight and have only one loss to their name through their last 22 games.

New Jersey Devils prospect Mitchell Hoelscher was named OHL “On The Run” Player of the Week following an eight-point weekend that included a goal in Friday’s shootout win over Flint, a career-high four-point effort in Saturday’s 5-0 shutout against Hamilton, as well as a pair of goals in his team’s 5-3 victory over Oshawa.

Hardie and Canade help Trout reel in the wins
The Steelheads continue to move up the Central Division with three straight wins and eight victories in their last 11 games. James Hardie scored the opening and final goal in Friday’s 4-2 victory over the Generals, before potting another the following night in Barrie. Nicholas Canade netted a hat-trick to lead the Fish to a 5-2 win past the Colts for his second hat-trick in six games. The Trout remain only four points behind the division-leading Sudbury Wolves.

He notched his second hatty of the month as the Fish schooled the neighbouring Colts 🐟 pic.twitter.com/FXvsObV3Wr

Captain Moncada earns his Troops a road win
The Battalion have struggled to maintain appearances in the win column this season, but they were able to pull out a road win on Saturday evening when they defeated the Central Division rival Niagara IceDogs in a 3-1 decision. Newly appointed captain Luke Moncada put up all three goals in a span of 5:44 in the third period for the fastest three goals ever scored by a Battalion player. This was Moncada’s second hat-trick in just seven games, having scored a trio in the Troops’ last meetup with the Dogs earlier this month.

Fastest to pot three in the green and white belongs to the captain. @MoncadaLuke | #BattleTogether pic.twitter.com/MKsgD29x5W

Moncada was awarded the captaincy following Brad Chenier’s trade to the Division-leading Sudbury Wolves at the deadline.

Another weekend, another McMichael hat-trick
Speaking of multiple hat-tricks, Washington Capitals first rounder Connor McMichael earned his fifth hat-trick this season and his second in four games when he helped the Knights to a 6-2 win past the Erie Otters on Sunday to round out two wins on the weekend. Friday’s 4-1 win over the Sudbury Wolves saw a two-goal performance from Minnesota Wild prospect Matvey Gustov and a couple of assists from Chicago Blackhawks prospect Alec Regula.  McMichael sits third in the OHL scoring race with 33 goals and 38 assists for 71 points.

In case you’ve lost count, this is the @Capitals prospect’s 5️⃣th hat-trick this season and 2️⃣nd in just 4️⃣ games. Another big W for @LondonKnights! pic.twitter.com/qatb4QBTE0

Petes are looking up
Also coming out of the weekend with consecutive wins to their name are the East Division’s second-seeded Peterborough Petes. After shutting out the Flint Firebirds 2-0, the Petes scored nine goals on the Niagara IceDogs to round out their perfect weekend. They saw two goal games from Toronto Maple Leafs pick Nick Robertson, Winnipeg Jets prospect Declan Chisholm, and San Jose Sharks signee Zach Gallant, the latter two of which registered four-point nights. Newly acquired forward and Los Angeles Kings prospect Akil Thomas also posted four helpers in Sunday’s big win for his second four-point display in just three games.

Chisholm, Gallant, and Thomas record four points each in 9-2 Petes routing of IceDogs

Sarnia’s McGregor sets club record
Overager Ryan McGregor set a new club record over the weekend after he suited up for his 268th game in a Sting uniform, surpassing forward John Hecimovic’s run from 2000-2005. In his fifth season wearing the black and gold, the OHL veteran has amassed 17 goals and 31 assists for 48 points and currently sits third in club scoring behind fellow overager Sean Josling and NHL Draft hopeful Jacob Perreault. McGregor has accumulated 208 points (80-128–208) over the course of a five year stint with the Sting.

An accomplishment to bee proud of 🐝

Congrats to fifth-year veteran @ryanmcgregor84 on playing the most career games in @StingHockey history.

Neumann putting up numbers
Oshawa’s Brett Neumann put up points in his 10th straight game when he registered an assist in Sunday’s 5-3 loss at the hands of the top seeded Ottawa 67’s. This came after the overager potted a pair of goals in Saturday’s 4-2 loss to the Steelheads, reaching 32 goals on the year and briefly earning a spot as the league’s top goal scorer until Quinn’s emergence. The Oshawa overager’s 60 points places him second in club scoring behind newly acquired Philip Tomaino‘s 68 (28-40-68), and ninth in overall points among OHL skaters.

Winless skids continue for Storm, Colts
For the second straight weekend, the Guelph Storm have emerged winless. The once top-seeded Midwest squad has now dropped their last seven straight games. Though they came close to edging the Kitchener Rangers Sunday night, Riley Damiani’s late third period goal provided the Blueshirts with a lead they’d hold onto until the clock ran out. The Storm were also without injured goaltender Nico Daws for their three-in-three, after he left warmup with an injury ahead of last Thursday’s Kubota CHL/NHL Top Prospects Game in Hamilton.

Similarly, the Barrie Colts have been without a victory in their last six games, maintaining an 0-5-0-1 tally since Jan. 6.