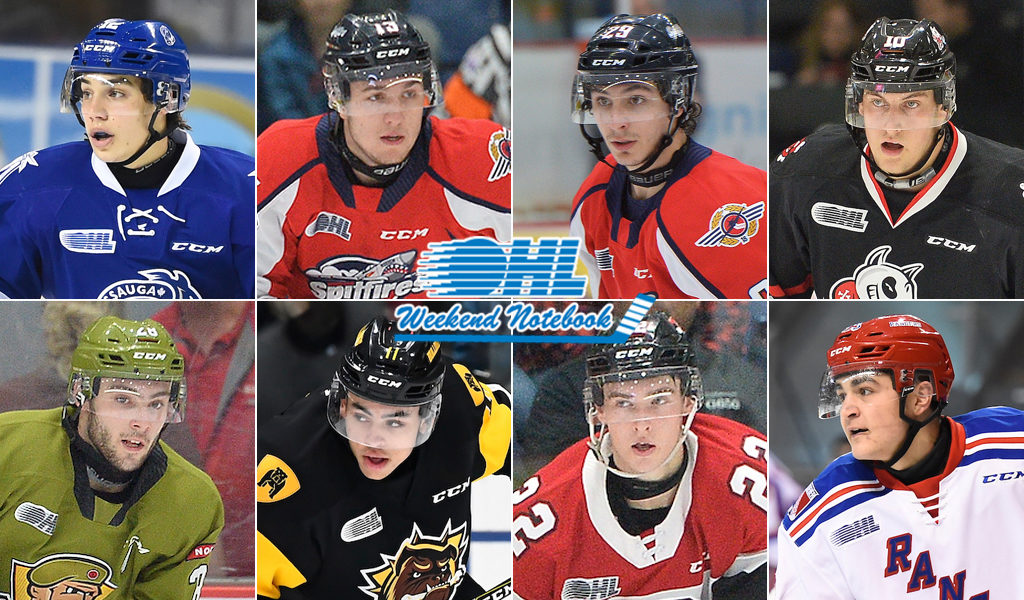 A weekend of hat-tricks
A handful of players collected their first OHL hat-tricks over the weekend. Daniel D’Amico’s trio came in the opening frame of his team’s big 10-4 victory over the Greyhounds, before scoring in the second and third periods to cap off a career-high five goal performance. Teammate Will Cuylle picked up the second hat-trick of his career in the same contest, notching the opening goal 47 seconds in and adding two more in the second period.

Hamilton Bulldogs captain Isaac Nurse raised three goals as his team blew past the Niagara IceDogs 8-2 on his very own bobblehead night. It was Nurse’s fifth game back since returning from an injury that sidelined him through much of the first half.

Third year Mississauga Steelheads forward Nicholas Canade also got his first hat-trick out of the way, finding the back of the net three times in a 7-3 win over the Peterborough Petes. Canade opened the scoring, then nabbed a pair in the final frame to cap off his team’s offensive surge.

Surging NHL Draft prospect Jack Quinn continued his impressive on-ice performance with a hat-trick as the Ottawa 67’s doubled down on an East Division opponent in Kingston by a score of 8-4.

Mason Howard and Luke Moncada traded hat-tricks in last Thursday’s 9-8 overtime thriller between the Niagara IceDogs and North Bay Battalion that ended in favour of the Dogs.

Jonathan Yantsis also buried a hat-trick in his team’s 7-6 overtime loss to the Niagara IceDogs on Saturday.

First career #OHL hatty in the bag for the @BulldogsOHL captain, and on his very own bobblehead night, too 😏

The Bulldogs scoop up an 8-2 win 👏 pic.twitter.com/lo7CsQnRHh

Overager Joseph Garreffa saw his current league-leading point streak reach its 18th game while leading OHL scorer Rossi pushed his streak to game number 17 with an amassed 21 goals and 22 assists for 43 points in that span.

Cedrick Andree’s 27-save shutout was his third of the season and second against the Otters, having defeated them 2-0 on Nov. 2 with a perfect 32 saves under his belt.

The 67’s blew past their previous record set during the 1998-99 season when they defeated the Kingston Frontenacs 8-4 last Thursday and earned win number 15 on the year.

The Barber Poles boast a 29-6-0-0 record for 58 points, the best in the Canadian Hockey League.

The Spits are on a five-game winning streak, carving out a two point cushion on second place Saginaw in the West Division with a pair of games in hand. Russian winger Egor Afanasyev, a Nashville Predators second round pick, continues to put up numbers riding an 11-game point streak.

Friday’s 10-4 win over the Greyhounds was followed by a 3-2 victory in Sudbury and a 3-2 overtime win in North Bay.

Third-year forward fuels a 1⃣0⃣🚨 effort, lighting the lamp 5⃣ times to tie a single game club record that has stood since 1977! pic.twitter.com/tEsMazkd27

Bad news for Bulldogs as Jenik goes down with injury
Both the Hamilton Bulldogs and the Czech National Junior Team received some bad news last week when Arizona Coyotes prospect Jan Jenik went down with a lower body injury and didn’t return to the ice.

In a bit of positive news, TSN’s Bob McKenzie did report via his well-known Twitter account that the Bulldogs have a bead on 2020 NHL Draft prospect Jan Mysak, who skated alongside Jenik on the Czech National Junior Team. The 17-year-old has nine points (5-4-9) over 26 games in the Czech Republic’s top pro circuit this season.

2020 draft eligible forward Jan Mysak, who played for CZE in WJC, is heading to Hamilton Bulldogs of the OHL.

Knights find their groove
The London Knights have officially found their groove, wrapping up the weekend in the win column with four straight victories. Ottawa Senators pick Jonathan Gruden stepped up in the absence of Canadian gold medalists Connor McMichael and Liam Foudy to produce two goals and two assists over the weekend. Rookie netminder Brett Brochu made 40 saves in Saturday’s 3-1 win over the Mississauga Steelheads.

The club sits only one point behind the Guelph Storm and Kitchener Rangers, who are currently tied with 49 points for first in the Midwest Division. The Knights, who have defeated the Sarnia Sting twice along with other wins over Mississauga and Flint on their current run, will have McMichael, Foudy and Canadian National Junior Team head coach Dale Hunter back behind the bench this weekend.

Rangers’ Ingham keeps rolling
With three wins in three starts over the course of last week, Kitchener’s Jacob Ingham continues to turn heads. The 19-year-old owns an 11-1 record with a 1.49 goals-against average, .951 save percentage and two shutouts since December 1st as the Rangers have turned things around in the Midwest Division. The Los Angeles Kings prospect stopped 108 of the 112 shots that came his way in wins over Erie, Saginaw and Guelph.

Ingham’s impressive performance has earned him OHL ‘On The Run’ Player of the Week status for the second time in three weeks, an accolade that is also accompanied by being named OHL Goaltender of the Month for December.

Perfetti has big weekend as Spirit keep pace in West
While there’s been a lot of hype surrounding some other 2020 NHL Draft eligibles who won gold with Canada in the Czech Republic on Sunday, Saginaw Spirit forward Cole Perfetti had a big weekend, helping the Saginaw Spirit remain within two points of first place in the West Division.

After Saginaw dropped a 4-2 decision in Kitchener on Friday, Perfetti came out with a career-high five point showing on Saturday with a goal and four assists as the Spirit defeated visiting Oshawa 8-4. He stretched his point streak to eight games with a goal and an assist in Sunday’s 5-3 win over visiting Sarnia.

#CHL Player of the Night is top #NHLDraft prospect @ColePerfetti91 of @SpiritHockey with an @OHLHockey career-high 5️⃣ point performance including a personal best 4️⃣🍎: https://t.co/Yo5f65udBxpic.twitter.com/3lfYvu9dX1

Otters earn four of six points on the road
It was a reasonably successful road trip for the Erie Otters in the Eastern Conference this past weekend. Daniel Murphy made 27 saves as the Otters blanked the CHL’s seventh-ranked Peterborough Petes 5-0 on Thursday before Danial Singer and Max Golod both scored twice in a 6-3 triumph over Kingston on Friday.

The club spent Saturday night in the nation’s capital watching a trio of prominent Otters alumni in Tampa Bay’s Anthony Cirelli and Erik Cernak up against Ottawa forward Connor Brown as the Lightning visited the Senators.

The Otters were no match for the 67’s on Sunday, falling 5-0 as they rounded out the weekend holding down the eighth and final playoff spot in a tight Western Conference.

A little team bonding on the road catching #OttersAlumni Connor Brown, Anthony Cirelli, and Erik Cernak in action in Ottawa with @TBLightning vs @Senators! pic.twitter.com/uTeuEUqrFn

Sting continue to get Stung
Overager Ryan McGregor put up five points (4-1-5) and Ryan Roth finished with four points to his name (1-3-4), but the Sarnia Sting rounded out their three-game weekend collecting just one of a possible six points, falling to a group of Western teams in Owen Sound, Sault Ste. Marie, and Saginaw. The club has dropped eight in a row and hasn’t tasted victory since Dec. 14.

Their 15-20-4-0 record keeps them at the bottom of a highly competitive Western Conference with 34 points.

On deck, the Sting prepare for a three-in-three weekend hosting Oshawa on Friday before visiting Hamilton and Erie on Saturday and Sunday.

Sting fall short of a comeback, lose 5-3 to Saginaw@LeonsFurniture is bringing you last night’s Game Story from Saginaw : https://t.co/AK0ovGsUgC@LeonsFurniture – Part of the Family pic.twitter.com/YGqzbSZK6S

Petes hit with adversity
Since giving way to the Ottawa 67’s and falling out of first place, the Peterborough Petes have taken a step back. The club fell in all three of its weekend matches and only have one win to their name since returning to the ice following the holiday break. The Petes have missed some key pieces due to a combination of illness and World Junior duty as top scorer Semyon Der-Arguchintsev hasn’t seen the ice since New Year’s Eve.

Nick Robertson made his return to the lineup in Sunday’s loss, recording two assists. The Petes look to shake off weekend losses to Erie, Guelph and Mississauga when they play host to the Owen Sound Attack on Thursday night.