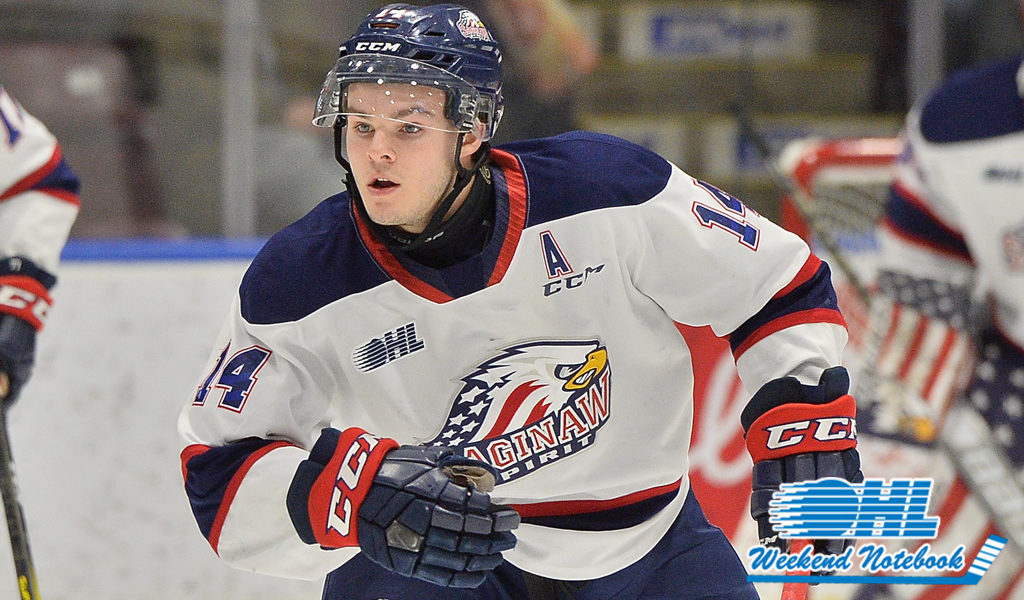 Spirit keep the points coming
The Saginaw Spirit skate away from the weekend on a six-game point streak with back-to-back wins in both weekend matchups.

They’d follow it up with a lopsided 8-2 blowout of the Hamilton Bulldogs, fueled by overager DJ Busdeker’s career high five-point night that featured four goals (including a first period natural hat-trick). Carolina Hurricanes first rounder Ryan Suzuki also had a hand in the big win with a pair of goals.

The Spirit continue to lead the West Division with 71 points, though the Flint Firebirds are hot on their tail, trailing by just one.

#CHL Player of the Night is @OHLHockey overage forward @dbuzzy14 of @SpiritHockey with a career high 5️⃣ point performance including a first period natural 🎩🎩🎩 plus ☝️🚨: https://t.co/qe1P9nw61A pic.twitter.com/i5fcA8NAYn

Colts and Spitfires headed to the playoffs
The playoff picture continues to take shape around the league. The Barrie Colts and Windsor Spitfires are the latest teams to clinch their spots.

The Colts may have dropped a 6-1 contest at the hands of the Peterborough Petes but a Niagara IceDogs loss guaranteed them their space in the 2020 OHL Playoffs.

Meanwhile, the Spitfires put together an offensive surge in a 10-2 blowout of the Kingston Frontenacs, and their earned two points stamped their postseason ticket as the fifth Western team to clinch a spot.

Robertson becomes first OHLer to 50
Nick Robertson was welcomed to the 50-goal club in extraordinary fashion.

The Toronto Maple Leafs prospect posted a hat-trick to propel his Petes to a 6-1 takedown of the Colts Sunday afternoon, hitting the milestone upon completing the trio shorthanded in the game’s third period.

Robertson becomes the first OHLer this season to reach 50 goals and, in doing so, is the first Petes skater in 27 years to hit the 50-goal marker in a single season.

The @MapleLeafs prospect becomes the first @PetesOHLhockey player in 27 years to hit the 50-goal marker 👏 pic.twitter.com/uO6xhA0J8e

A couple of the league’s top scorers surpassed the 40-goal mark this past weekend, too. Guelph’s Pavel Gogolev came out of Friday’s 5-3 defeat of the Erie Otters with goals 40 and 41 before earning another in his team’s 6-3 fall to the Windsor Spitfires; the loss that spoiled their nine-game point streak. Damien Giroux hit the milestone on the first of a two-goal performance in Saginaw’s aforementioned 5-2 win over the Kingston Frontenacs.

Re-wright-ing a Frontenacs record
Rookie phenom Shane Wright had a similar fate over the weekend, rewriting the Kingston Frontenacs’ record book with a three-goal performance of his own.

The 16-year-old netted his first career OHL hat-trick in a 6-1 road win over the Flint Firebirds, surpassing the 37-goal mark and, in doing so, soaring past former Kingston Canadian Bernie Nicholls’ previous rookie record at 36 goals set in 1989-90. He’d finish out the day with 39 goals, and his now 66 points on the year ties Connor McDavid’s output during his exceptional status rookie season with the Erie Otters in 2012-13.

Wright’s impressive Saturday showing caps off an outstanding month for which he was recognized as February’s top player and rookie.

Congrats to 16-year-old @shane_wright51 of the @KingstonFronts named #OHL Player & Rookie of the Month with 14G and 24PTS: https://t.co/YDgl4c1sxN pic.twitter.com/i4zp5OaY8K

Rangers on a roll
A pair of weekend wins stretched the Kitchener Rangers’ latest win streak to five games.

A 7-3 Friday night win over the Sarnia Sting saw four assists from Florida Panthers prospect Serron Noel and a three-point night that included a pair of goals off the stick of overager Jonathan Yantsis.

The following night would see the Rangers edge the Owen Sound Attack 5-4 in the shootout with a standout performance from fellow overager Liam Hawel, who posted two goals and an assist in the comeback win before notching the lone shootout goal to secure the edge.

The @OHLRangers overcame a 4-1 deficit before @hawel24 and @JacobIngham_ teamed up in a shootout to secure a fifth straight win and a new spot at the top of the Western Conference 🔵🔴⚪️ pic.twitter.com/avunXdf6wV

Goaltender Jacob Ingham’s two wins puts him in a tie with Ottawa netminder Cedrick Andree for most wins on the season at 31.

Ottawa claims what is theirs
Playoff positioning continued to take form as the Ottawa 67’s secured their spot atop the East Division.

They locked down the division leadership for the second straight season upon defeating the visiting Oshawa Generals 4-1 Friday night. They’d go on to collect wins over the visiting Barrie Colts in Saturday’s Sportsnet game before an Oshawa rematch would land in their favour on behalf of New Jersey Devils draftee Nikita Okhotyuk’s shorthanded heroics in overtime, landing them six points in a successful three-in-three weekend. Marco Rossi continues to lead the league in points with 110, and netminder Cedrick Andree continues to own the most wins among his peers with 31, sharing the accolade with Kitchener’s Jacob Ingham. Andree stopped 32 of 35 saves in his 100th OHL game Sunday night in Oshawa.

As it stands now, the Frontenacs maintain that final playoff space with a 19-36-2-2 record and 42 points, a total they share with the IceDogs but with one game in hand.

Niagara’s skid-snapping 6-3 win over Barrie on Thursday temporarily pushed them back into the playoff picture until Kingston’s Saturday win over Flint allowed them to reclaim their position.

First #OHL hat-trick from @shane_wright51 headlined a big @KingstonFronts road win as they grounded the red hot Firebirds in one of six Saturday contests.

Foudy, Brochu, and the Knights’ ongoing success
The Western Conference-leading London Knights continue to rake in the wins.

Following a Wednesday night overtime win over the division rival Guelph Storm, the Knights would double up on both the Soo Greyhounds and the Erie Otters. Columbus Blue Jackets prospect Liam Foudy earned seven points (2-5—7) over the course of the three-game week as part of a 14-game point streak over which he’s amassed 28 points. His offensive boost has earned him the title of OHL ‘On The Run’ Player of the Week.

With Brett Brochu between the pipes for all three wins, the netminder has now won 19 of his last 20 appearances and has set a new record for London rookie goaltender wins with 29 to his name.

Sarnia and North Bay skate away with positives
The Sarnia Sting and North Bay Battalion are rounding out the final spot in the Western and Eastern Conferences respectively.

Following tough losses to the Flint Firebirds and Kitchener Rangers, the Sting wrapped up their weekend with their first road win since mid-December upon edging the Soo Greyhounds 4-3, a much-needed win that saw top NHL Draft prospect Jacob Perreault bury his 37th goal and winger Sam Bitten score in his 200th OHL appearance.

The Troops succeeded in handing a loss to divisional foes as well, the Niagara IceDogs. NHL Draft hopeful Brandon Coe put up his first OHL hat-trick in the win and overager Shane Bulitka registered three helpers. Captain Luke Moncada was left off the scoresheet for the first time since Jan. 26, spoiling what was a 14-game point streak over which he put forth 19 points (9-10–19).

A first career trio from the #NHLDraft hopeful drives the @OHLBattalion to victory in Niagara ⬇️ pic.twitter.com/8FZmgDugfZ

Colts take a hit
Though they can rest assured they’ll be in the 2020 OHL Playoffs, the Barrie Colts have definitely seen better weeks, especially as of late.

Following last Sunday’s 8-1 thumping at the hands of the neighbouring Mississauga Steelheads, the Colts dropped their next match 6-3 to the Niagara IceDogs, who were finally able to shake their 14-game losing skid.

They’d go on to lose a heartbreaker to Ottawa in a 4-3 overtime contest in front of a Sportsnet audience before allowing six unanswered Peterborough goals in Sunday’s 6-1 loss.

They’ll try and climb back into the win column in their upcoming matchup with the division rival Sudbury Wolves before taking on a pair of red hot opponents in the Kitchener Rangers and Ottawa 67’s.

Cameron Tolnai was the overtime hero in the nation’s capital as @OHLHockey’s East Division champion @Ottawa67sHockey tightened their grip on first place overall with a 4-3 triumph over @OHLBarrieColts for their 46th win of the season in Saturday’s #CHL on @Sportsnet action 🎥 pic.twitter.com/s1Cjy8lXL9