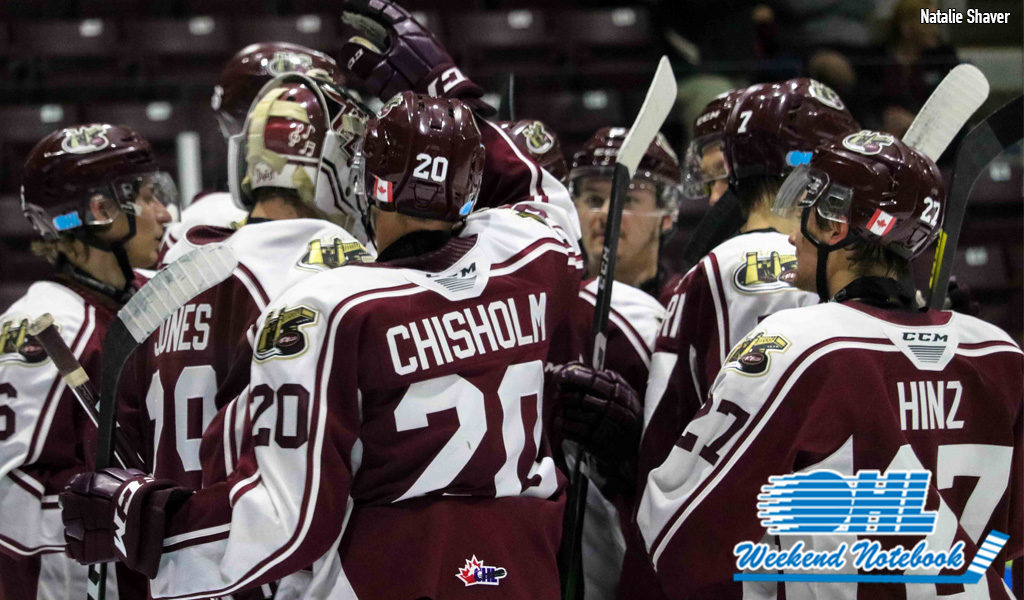 Petes pull away from Generals with dominant weekend
The Peterborough Petes went 3-0, outscoring their opponents 25-2 to put a five point cushion between themselves and the fourth place Oshawa Generals in the Eastern Conference.

The leading scorer in the CHL, Robertson now has 55 goals over 46 games this season, eight shy of a Petes single season franchise record set by Scott Tottle back in 1983-84.

Nick Robertson (@nickrob2001) has been named the #OHL #OnTheRun Player of the Week!

50-goal space welcomes another
Ottawa winger Jack Quinn became the second CHL skater to reach 50 goals on the season this past weekend.

The top NHL Draft prospect recorded back to back markers, opening up an 8-0 win for the Ottawa 67’s on Sunday afternoon, and nailing his 51st goal in doing so. He becomes the 10th CHL skater in 20 years to reach the milestone en route to the NHL Draft, among stars like John Tavares, Steven Stamkos and Patrick Kane.

With a sharp backhand shot, the top #NHLDraft prospect becomes the second @CHLHockey skater to reach the milestone this season 🎉 pic.twitter.com/liTDWdud0t

McMichael hit the milestone upon scoring his second goal of the game and 45th goal of the season, capping off a three-point night in Friday’s 4-1 win over the Sarnia Sting.

With an assist on @TylerTullio‘s tying goal, the @Oshawa_Generals centreman and @PredsNHL draftee becomes one of four #OHL players to enter the Century Club so far this season 🎉 pic.twitter.com/LXmDfPqSMC

Tomasino officially entered the Century Club upon feeding the puck to teammate Ty Tullio for the tying goal toward the end of the third period in his team’s 4-3 shootout loss to the Guelph Storm.

An 8-5 win over the North Bay Battalion on Friday night secured the Steelheads their ticket to the 2020 OHL playoffs for the fifth straight season.

With the win tonight the Steelheads punch their ticket to the OHL playoffs!#SteelTheShow pic.twitter.com/MJOeMRA5fm

The reigning champion Guelph Storm slipped into the postseason picture once again following their Friday night 4-3 shootout edging of the Oshawa Generals.

Despite skating away from the weekend on a six-game losing skid, losses on behalf of the Kingston Frontenacs and Niagara IceDogs secured a playoff presence for the Dogs for their fourth year in a row.

Spirit’s streak solid at seven
The Saginaw win streak kept its perfect pace over the weekend with wins against Mississauga, Hamilton and Erie.

New York Islanders prospect Blade Jenkins potted a pair in his team’s Thursday morning 6-2 win past the Steelheads. Ilya Solovyov and fellow Islanders pick Bode Wilde followed it up with more of the same, putting up two-goal performances in Saturday’s high scoring 8-6 contest with the Bulldogs. Sunday’s edging of the Otters saw a three-point outing for top NHL Draft hopeful Perfetti, who has now accounted for 25 points (8-17—25) over 12 straight games.

Hungry for another West Division title, @SpiritHockey wrapped up a perfect weekend with their seventh straight win in one of seven Sunday matchups.

The Spirit have put up points in their last nine appearances and continue to own the West Division’s first place slot.

Knights steadily racking up the wins
London wrapped up their three-in-three with their seventh straight appearance in the win column. The team kept their opponents to one goal each in all three matchups.

McMichael’s three-point production helped the Knights skate past the Sting on Friday. A team effort came through in Saturday’s 3-1 defeat of the Erie Otters, while Sunday saw a two-point showing from Liam Foudy, who stretched his point streak to an 18th appearance. In that time, the Columbus Blue Jackets pick has been solid for 34 points (13-21—34).

Make it an 1⃣8⃣ game point streak for @foudshow 🏒

The @BlueJacketsNHL draftee fires a beauty shot to the back of the net for the opening goal in a @LondonKnights win. pic.twitter.com/NXKMly6AtV

67’s shut out the opposition
As the Barber Poles reigned victorious in both of their weekend matches to push their recent win streak to its seventh game, both of their goaltenders skated away with their fourth shutouts of the season.

Cedrick Andree was good for all 13 shots he faced during the team’s 6-0 blanking of the Barrie Colts. Andree owns a 2.42 goals-against average and a .916 save percentage in 43 appearances, over which he owns a 32-9-0-1 record.

Rookie netminder Will Cranley solved all 19 shots in an 8-0 win over the North Bay Battalion on Sunday, tacking on to his 17-2-0-0 winning record. He posts a 2.90 goals-against average and .891 save percentage over 20 games in the Ottawa net.

Brochu etched in OHL history
Of course, a key piece to London’s success this season has been Brett Brochu’s strength in net.

Brochu saved 24 of the 25 attempts he faced between the pipes in his team’s 3-1 defeat of the Oshawa Generals to earn win number 32, setting a stand-alone league record for victories among 16 and 17-year-old goaltenders.

In doing so, he surpassed the former tally set by John Vanbiesbrouck (Sault Ste. Marie, 1980-81) and Andrew Loverock (Mississauga, 2006-07), who were both good for 31 wins in their rookie seasons.

A remarkable rookie season for @BrettBrochu 👏 @LondonKnights netminder made #OHL history with his 32nd win of the season on Sunday.

Frontenacs and IceDogs vying for eighth in the East
The Eastern Conference playoff race leaves one spot to be desired.

The Kingston Frontenacs currently house the eighth place slot, in a tie for 42 points on the season with the ninth place Niagara IceDogs. They’ve both kept up similar strides; each team dropping their last four matches and having fallen swiftly to their top seeded Eastern matchups.

Both teams have six games left on the schedule. Kingston will finish off the tail end of the season with a lineup of division rivals, including an upcoming back to back with the first place 67’s. The ‘Dogs will wrap the year up in similar fashion against a slew of Eastern teams.

Happy to be coming home.

The Owen Sound Attack currently own the seventh place slot with seven games left. Heading into Sunday’s 3-1 loss at the hands of the conference-leading Knights, the Attack kept their playoff pace in good shape on a five-game point streak.

Below the Attack sit the Erie Otters in the coveted eighth place space, trailing by five points with only five games remaining. Those final five matchups will see the Otters square up against the some of the best in the West in tilts with Saginaw, Flint and Kitchener.

Finally, the ninth place Soo Greyhounds rest only three points below the eighth place Otters with five games left on their schedule as well. The Hounds emerged from the weekend successful, taking down the Central Division’s top seeded Sudbury Wolves with a seven-goal production, featuring a three-point night from defender Robert Calisti. They’d defeat the Kingston Frontenacs the next day with nods to Zach Trott and Tye Kartye for multi-point showings.

.@zacktrott89 and Tye Kartye both had multi-point showings as @OHLHoundPower was victorious, keeping pace in their push for a playoff spot in one of seven Saturday matchups.