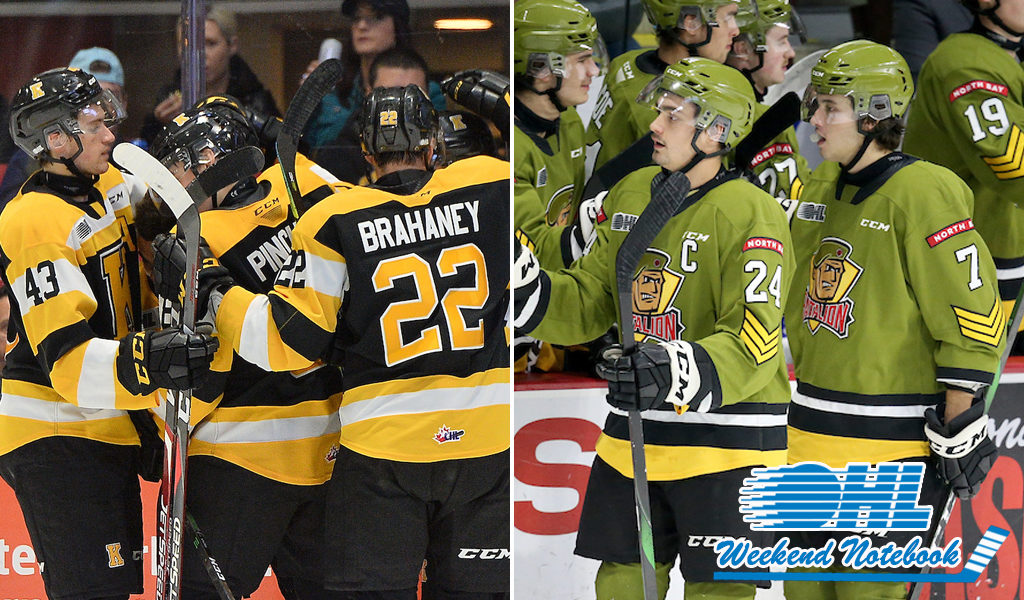 Garreffa’s eight-point weekend surges 67’s into first place
The Ottawa 67’s finished their three-game roadie with four out of six possible points, picking up wins in Flint and Sarnia over the weekend. Overage winger Joseph Garreffa led his team with eight points (5-3-8) that included a hat-trick in Ottawa’s 4-2 victory on Saturday. Another two goals and two assists helped the Barber Poles nab a 6-3 win over the Sting the next day, landing them in the OHL’s first place slot.

Alongside linemate Garreffa, leading Ottawa scorer Marco Rossi also had a four-point (2-2-4) showing, nabbing two goals and two assists in Sunday’s match. Cedrick Andree stood tall in net for both weekend games, totaling 59 saves. Andree, who is an Ottawa native himself, boasts a .914 save percentage and 2.57 goals against average.

The 67’s hope to maintain their first-place spot as they take on the second-overall Sudbury Wolves on Thursday back in the nation’s capital for their annual school day game.

Hamilton, Sudbury showdown saw second most goals in OHL history
Sunday’s epic 11-10 overtime battle between the Hamilton Bulldogs and Sudbury Wolves was one for the history books, as it was one goal shy of tying the highest scoring games in OHL history: a 16-6 win for Peterborough over Sault Ste. Marie in 1977, and a 16-6 triumph for Ottawa against Brantford in 1980. Though the Wolves fell short, their point earned lifted them to second place in the OHL standings with a 14-8-0-1 record.

As the score would suggest, multi-point nights were on display for a number of players. Tag Bertuzzi led the Bulldogs with a career-high four goals, including the heroic overtime winner. Arthur Kaliyev picked up two goals and two assists, and Avery Hayes earned his first career hat-trick. Sudbury scoring leader Quinton Byfield picked up a goal and two assists, and Blake Murray scored two goals and one assist.

Ever wanted to see 2️⃣1️⃣ goals from a single game in 6️⃣0️⃣ seconds?

Guelph’s win streak lives on
The Guelph Storm continue their red hot win streak with back-to-back wins at home against the Owen Sound Attack and Saginaw Spirit. Second-year defenceman Daniil Chayka scored 2:19 into overtime to win it for the Storm 4-3 on Friday, while a pair of goals from overager Cedric Ralph secured the squad’s eighth straight win on Saturday by a score of 2-1. Guelph tendy Nico Daws made a total of 58 saves and continues to lead the league with .932 save percentage and 2.44 goals against average.

The Storm will seek out their ninth straight win in Kitchener Tuesday night.

Make it seven straight wins for the defending champions 🌪 @cam_hillis wins the battle and @daniilchayka55 takes care of the rest as @Storm_City swirls past visiting Owen Sound in overtime. pic.twitter.com/eVUNl01Xwo

North Bay earns much-needed win
The Battalion entered Sunday’s match against the Barrie Colts on an 11-game losing skid, but were able to finally come out on top, edging the cross-division rivals in a 5-4 decision. The Troops saw five different scorers in their only game of the weekend, with leading scorer Brad Chenier picking up a goal and an assist. The Battalion overager has registered points in his last six games (6-3-9), while draft eligible winger Brandon Coe is on a four-game point streak (2-4-6).

The Battalion are back at home Thursday night against the Oshawa Generals.

Soo on the upswing
The Soo Greyhounds’ third straight win came in a 3-1 decision against the Oshawa Generals on Saturday with two-point nights from Tye Kartye (1-1-2) and Jaromir Pytlik (1-1-2). The Soo are finally on the upswing after a seven-game losing streak that began on Oct. 24 with a 6-4 loss at the hands of the Windsor Spitfires. Sault Ste. Marie’s top four scorers – Kartye, Pytlik, Rory Kerins, and Cole MacKay – are all currently tied with 23 points. Kartye and Kerins also led the Soo to their 4-3 victory over the Bulldogs Friday night.

Next in store for the Greyhounds is a three-game West Division road trip with stops in Windsor, Flint, and Sarnia.

Blink and you’ll miss it 👀

Robert Calisti hits Jaromir Pytlik flying through the middle for a quick redirect as @OHLHoundPower skated to a third straight win on Saturday 🔴⚪️ pic.twitter.com/LYaUgvJAJm

Regulation not enough for Erie, Mississauga
The Steelheads and Otters both had a busy weekend, with three games each under their belts. The Steelheads were successful in earning five out of a possible six points with a 6-2 victory over the Sting on Friday and a 4-3 shootout win over the Otters back at home Sunday night.

Though they earned points in all three games, the Otters were only successful in earning one win over the weekend against Mississauga in their 4-3 victory. Leading scorer Maxim Golod put up points in all three games (1-2-3) while Chad Yetman, who leads the team in goals, had a four-point weekend (2-2-4) that included two goals in his team’s 7-6 OT loss to Windsor.

We know you want to see it! @washer_9 roofs it top shelf and scores the lone goal in the shootout! #SteelTheShow pic.twitter.com/vsbj4rFtIH

Frontenacs’ five-point weekend halts losing streak
The Frontenacs snapped a 12-game losing streak and earned their first road win of the season with a 3-1 victory over the Owen Sound Attack on Saturday. The Fronts fell to the Kitchener Rangers the evening before but were able to earn a point in a 4-3 overtime loss. Jordan Frasca, Jakob Brahaney, and rookie Shane Wright all had multi-point games.

The Fronts are back in action Thursday night when they head to Peterborough.

We are coming home with 3 of 4 points this weekend! Here is tonight’s game recap by @bouthockey from @network_ohl after a 3-1 win over @AttackOHL.#WeRiseTogether

Spitfires stretch out point streak
While the surging Spitfires weren’t able to grab their 10th straight win in Niagara on Saturday, they did pick up a point in a 3-2 overtime loss; the squad’s third straight overtime match. Dallas Stars prospect Curtis Douglas had a strong weekend with four points (1-3-4) in the Spits’ 7-6 OT win over Erie, while Vegas Golden Knights pick Connor Corcoran also finished with a combined four points (2-2-4) in both games including Friday’s overtime winner.

Another night, another @SpitsHockey nailbiter as the Windsor boys tie it late in the third and get the job done on an OT winner from @GoldenKnights prospect @c_2corcoran. pic.twitter.com/fbQO9hh6Yj

Summoning the power of the backhander 🦸‍♂️

Just when you think he’s out of space, @byfield55 reaches into his bag of tricks on Superhero Night, scoring one of his 2️⃣🚨 for Friday’s #BestOfOHL instalment in a @Sudbury_Wolves victory 🐺 pic.twitter.com/eNgOszLAZ5

Jenik’s point streak reaches 20th game
Jan Jenik has been named OHL ‘On the Run’ Player of the Week.

The Hamilton centreman has proven unstoppable with a five-point weekend that saw his point streak reach an incredible 20 games. The Arizona Coyotes prospect from Nymburk, Czech Rep. has climbed to fourth overall in OHL scoring, tied with London Knight Connor McMichael at 43 points.