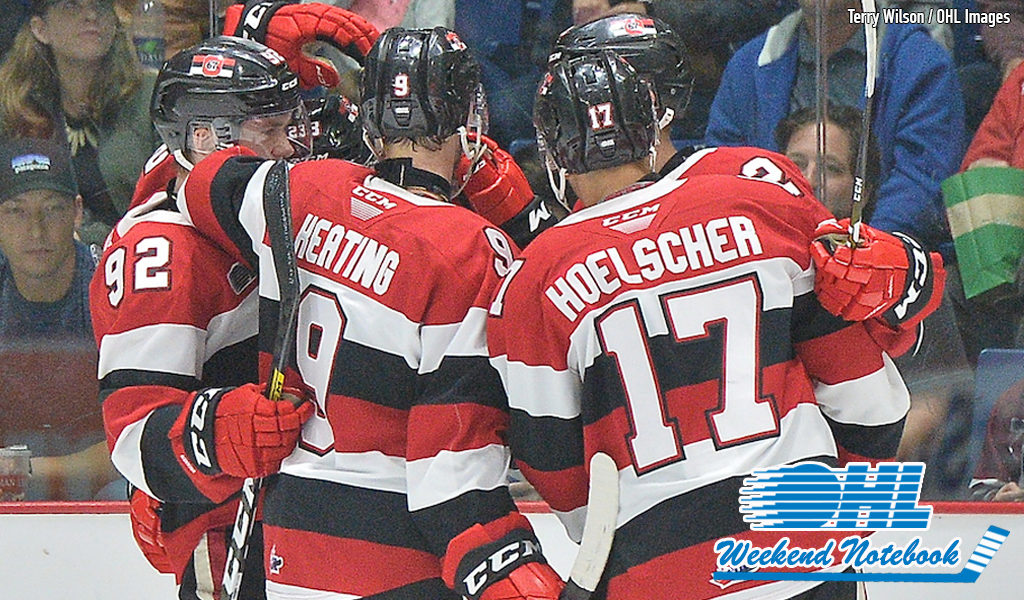 67’s take clean sweep on the road
The Ottawa 67’s are on a six-game run, taking consecutive victories over Niagara, Erie and Hamilton in a weekend three-in-three road trip.

Draft eligible centreman Marco Rossi is in the midst of an 11-game point streak that has yielded 26 points (5-21–26) while overage winger Austen Keating has collected points in 10 straight contests. OHL Defenceman of the Month Noel Hoefenmayer currently leads all blueliners with 25 points (7-18–25) through 16 games while recent addition Joseph Garreffa has also been a breath of fresh air, putting up 10 points (5-5–10) through his first six games.

The kids even got involved this past weekend, with Felix-Antoine Tourigny and Yanic Crete each scoring the first goals of their OHL careers.

.@noelhoefenmayer keeps giving us good stuff, so we’ll keep posting it! #OHL Defenceman of the Month tickles the twine as the late man off the rush, helping the @Ottawa67sHockey earn their 6️⃣th straight win 🔴⚫️⚪️ pic.twitter.com/XRrrVwgOtu

Spitfires not slowing down
The Windsor Spitfires are on a six-game winning streak, keeping that alive in Sault Ste. Marie on Saturday in a 10-2 drubbing of the Greyhounds.

2020 NHL Draft prospect Jean-Luc Foudy has points in seven straight while Tyler Angle, Egor Afanasyev and Daniel D’Amico have added some offensive punch alongside Cole Purboo who has led the team in scoring in each of the past two seasons. Blueliners Connor Corcoran and Ruben Rafkin have also provided added offence from the back end.

The Spits will be at home this weekend, playing host to North Bay on Saturday and Saginaw on Sunday.

McMichael’s monster weekend helps Knights win back-to-back
Washington Capitals prospect Connor McMichael is the OHL ‘On the Run’ Player of the Week for the second time this season.

The 18-year-old centreman enjoyed a career-high six point performance on Friday, completing his hat-trick with the overtime winner in a 7-6 triumph over the Erie Otters. McMichael added a goal and an assist in Sunday’s 5-1 road win over the Oshawa Generals and now sits second in OHL scoring with 34 points (17-17–34).

The Knights also saw the debut of overage goaltender Dylan Myskiw who spent the past three seasons with the Western Hockey League’s Edmonton Oil Kings, Brandon Wheat Kings and Victoria Royals. Myskiw entered Friday’s game in relief of Brett Brochu, stopping all five shots he faced to earn the victory. He made his first start on Sunday, stopping 28 of 29 to help the Knights knock-off the CHL’s third-ranked Generals.

#CHL Player of the Night is @Capitals first round pick @con91mcmichael of @GoLondonKnights with a career high 6️⃣ point performance and second 🎩🎩🎩 of the @OHLHockey season that ended with the OT winner: https://t.co/w4R0l0rkTC pic.twitter.com/ynnuMoWeUW

Colts come home happy with four points in Michigan
The Barrie Colts got what they came for this past weekend, defeating the Saginaw Spirit 4-3 in a shootout on Friday night before handing the Flint Firebirds their first home loss of the season in a 5-1 victory on Saturday.

Barrie sits one point back of first place Sudbury in the Central Division sporting a record of 10-5-0-1. They prepare for a three-game home stand, starting with a Saturday night tilt with the Erie Otters.

The @OHLBarrieColts take a 4-3 win in Saginaw to start their weekend road trip. pic.twitter.com/trtc2LJJQZ

Defending champion Storm on a four-game run
The Guelph Storm continued their strong play Friday in Sault Ste. Marie as Pavel Gogolev had a career night with three goals and two assists in a 6-4 win.

Gogolev’s hat-trick in a span of 3:44 on Friday is the fastest by a Storm player in over 20 years, outdoing a 4:34 mark by defenceman Kyle Pereira in December 2010.

Perhaps most impressive in Guelph thus far, 19-year-old goaltender Nico Daws leads the OHL with a .933 save percentage, going 5-1-1-2 over nine appearances.

The Storm visit the rival Kitchener Rangers on Friday before playing host to the Kingston Frontenacs Saturday night.

Wolves climb to top of Central
The Sudbury Wolves scored victories over North Bay and Peterborough to improve to 11-7-0-0, good for first place in the Central Division.

Overage winger David Levin, the first overall pick of the 2015 OHL Priority Selection, has been in the zone of late, putting up eight points (3-5–8) over his last four outings. 2020 NHL Draft prospect Quinton Byfield leads the Wolves offensively with 33 points (12-21–33), registering at least one in 10 of his last 11 games.

Christian Purboo earned both wins in the crease this past weekend, improving to 8-3-0-0 with wins in three of his last four starts.

He meant to mishandle that puck 😏@byfield55 gets the opposition right where he wants them before burying this #BestOfOHL beauty as the @Sudbury_Wolves returned to home ice in victorious fashion 🐺 pic.twitter.com/mUHgetAgxA

Sting top line a force to be reckoned with
The well-documented early season turnaround of the Sarnia Sting continued this past weekend as the bees buzzed to a pair of victories over Kia CHL Top 10 teams in the Flint Firebirds and Owen Sound Attack.

The big line of Sean Josling, Ryan Roth and Jamieson Rees continues to dominate, with Josling leading the team with 31 points (14-17–31) over 15 games. Roth has put up 18 points (7-11–18) over 10 games since being acquired from the Soo Greyhounds and Rees has been a human highlight reel, producing 22 points (9-13–22) over nine games after serving a suspension.

Sting GM Nick Sinclair acquired Vegas Golden Knights prospect Jordan Kooy last week, but with star rookie Benjamin Gaudreau off at the World Under-17 Hockey Challenge, Ethan Langevin has stepped up to win three of his last four outings, posting a .923 save percentage along the way.

Bar-down shorthanded beauty from @_jamiesonrees 🥅⬇️@Canes prospect scores his 9️⃣🚨 in as many games this season as @StingHockey stayed hot, winning their 7th in the last 8 games 🐝 pic.twitter.com/X1q0mBzabt

Kaliyev-Jenik connection carrying Bulldogs offensively
The Hamilton Bulldogs went 2-1 this past week, defeating the Barrie Colts and Mississauga Steelheads before dropping a 7-4 decision to the red hot Ottawa 67’s on Sunday.

The Dogs have been without injured captain Isaac Nurse since October 18th and currently sit fourth in the East Division with an 8-9-1-0 record. They continue to cycle through a stable of young goaltenders as Zach Roy, Marco Costantini and Matteo Drobac have all seen time in the crease of late.

Congrats to @LAKings prospect @Arthur_Kaliyev of @BulldogsOHL named #OHL Player of the Month for October with 14G and 25PTS. in 12GP: https://t.co/wPFt4RtHAv pic.twitter.com/5KEBXObHw9

Petes keep scoring on northern road swing
The Peterborough Petes settled for a split in Sudbury and North Bay this past weekend, but finished things off with an eight-goal outburst against the Battalion on Sunday.

The Petes may have met their match in a Sudbury team that has defeated them twice now this season. They won’t get another crack at the Wolves until February 17th in Peterborough.

Sunday’s win saw another two goals from Toronto Maple Leafs prospect Nick Robertson, giving him 19 on the season to push him into a tie with Hamilton’s Arthur Kaliyev for the OHL goal-scoring lead. Winnipeg Jets prospect Declan Chisholm notched an assist to extend his point streak to an OHL-high 15 games. Draft eligible winger Cameron Butler recorded a career-high three points with two goals and an assist in the win.

Peterborough’s three 10-goal scorers (Robertson, Kirk, McTavish) are the most in the league.

The Petes host the Kingston Frontenacs in a rare Tuesday night home game before paying the Frontenacs a visit on Friday.

IceDogs, Hounds, Fronts and Troops look to turn things around
A number of OHL clubs are in the midst of lengthy losing skids.

The Kingston Frontenacs have dropped eight in a row, and with the departure of star rookie Shane Wright to the World Under-17 Hockey Challenge, things don’t look to be getting any easier as they face the high-scoring Peterborough Petes in a home-and-home this week. The Fronts recently added overage defenceman Nick King to the back end, providing them a little more experience to face the opposition’s top six.

The North Bay Battalion dropped their seventh in a row on Sunday. The Troops have surrendered a league-high 96 goals this season, including six or more in six of their last seven games. The Battalion will have their work cut out for them as they go into London, Windsor and Sarnia for a three-in-three this weekend.

A team that hasn’t found itself in the basement of the West Division for some time, the Soo Greyhounds have dropped five in a row. The Hounds embark on a weekend road trip with games in Sarnia and Flint featuring a new leadership group that was announced on Monday. 2020 NHL Draft prospect Ryan O’Rourke will wear the ‘C’ as the Greyhounds look to turn over a new leaf.

The Niagara IceDogs have also lost five straight after being blanked 4-0 in Erie on Sunday. Star centreman Phil Tomasino has been held off the scoresheet in four straight games. The Dogs have surrendered an average of over 40 shots per game this season. They try and right the ship this weekend in Sudbury and Hamilton.

Catch up on big performances from @shane_wright51, @BOthmann78 and @masonmctavish27.