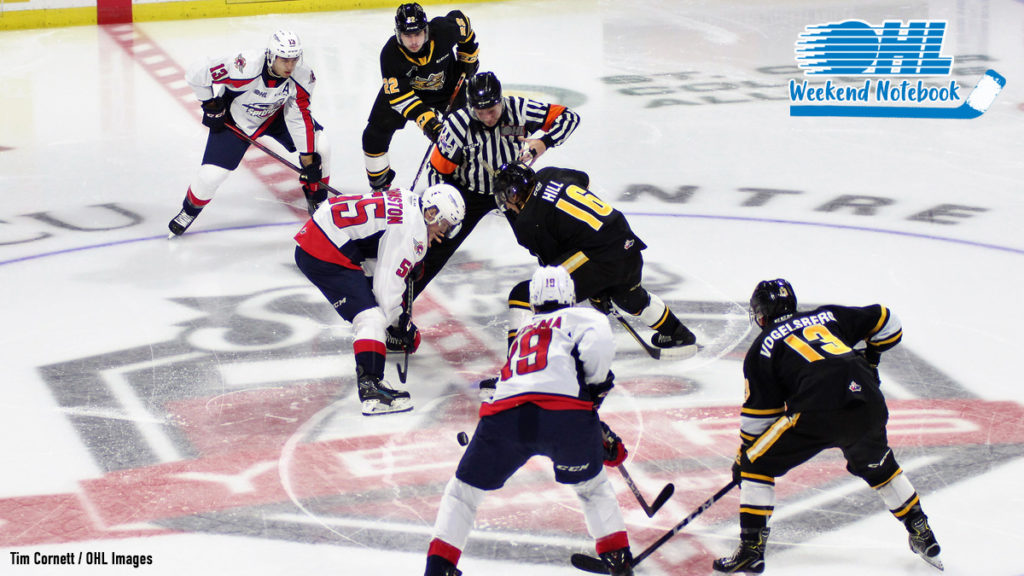 If pre-season was any indication, Calum Ritchie is going to be a player to watch.

The second overall 2021 OHL Priority Selection made a splash over Opening Weekend, following up an impressive 12-point pre-season with three goals and four points over his three-game OHL debut.

Keep on keeping on, kid. @Cal_Ritchie with his third goal in as many games!#OSHvsOTT pic.twitter.com/82KBA12klm

Niagara IceDogs netminder Tucker Tynan was welcomed back to the ice on Thursday for the first time since his life threatening injury on December 19, 2019. He recorded an almost perfect 25 saves on 26 shots he faced in a 4-1 win over the Barrie Colts and emerged from the weekend with two wins under his belt, leading to recognition as the OHL’s Goaltender of the Week.

Tucker Tynan’s valiant return to the crease continues as the @OHLIceDogs netminder has been named the #OHL Goaltender of the Week following a pair of wins. #GOTW

Matvey Petrov didn’t waste any time making an early mark in the League. The first overall 2020 CHL Import Draft pick and Edmonton Oilers prospect netted a hat-trick in his OHL debut, paving the way for a 7-4 defeat of the Peterborough Petes. The Russian forward skated away with a big five points to his name and a League-leading four goals; a feat he currently shares with London Knights captain Luke Evangelista.

Matvey Petrov’s first was definitely one to remember.

A handful of teams marked the start of the long-awaited 2021-22 season with leadership group announcements. The Kingston Frontenacs kicked off their home opener with the announcement of top NHL Draft target Shane Wright as captain.

The @KingstonFronts announced their leadership group ahead of Friday’s home opener with star Shane Wright (@shane_wright51) sporting the ‘C’.

The London Knights are off to a hot start with a perfect Opening Weekend in the books.

Newly-appointed captain Luke Evangelista led the way as the Knights edged the Owen Sound Attack in back-to-back contests before defeating the Windsor Spitfires in an eight-round shootout decision Monday afternoon.

A look at our opening weekend 👀

He’s only getting started, but Jack Matier had a day to remember this past Monday.

Literally minutes after the Nashville Predators announced he’d signed his entry level contract with the club, the Ottawa 67’s defenceman scored the first of two goals as part of a five-point showing in a big 7-3 win over the Oshawa Generals in front of a home crowd. Matier’s stunning performance earned him first star honours.

I’ll tell you someone who doesn’t hate Mondays!

Congrats to @Ottawa67sHockey‘s Jack Matier on his 5 point afternoon! pic.twitter.com/OzjlUuCPAL

Tampa Bay Lightning prospect Jack Thompson is off to an impressive start with a League-high eight points to his name over his three-game season debut.

Appointed captain ahead of puck drop on the regular season, the defenceman helped the Sudbury Wolves to back-to-back wins against the Petes and Soo Greyhounds respectively with three and four-point nights respectively before adding a shorthanded goal in a loss to the North Bay Battalion Monday afternoon. Thompson’s eight-point efforts led to recognition as the OHL’s Player of the Week.

Defenceman and @TBLightning prospect Jack Thompson of the @Sudbury_Wolves has been named the #OHL Player of the Week after leading the League with seven points in a pair of victories. #POTW

Key players out of the lineup to begin the season

While most of the League’s big name stars took to the ice over the weekend, a few were absent including NHL hopeful Mason McTavish of the Peterborough Petes who has cracked the Anaheim Ducks season-opening roster after being the third overall pick of the 2021 NHL Draft.

Other prominent names out of the lineup include Los Angeles Kings first round pick Brandt Clarke of the Barrie Colts who is out with a bout of mononucleosis. Seattle Kraken prospect Ryan Winterton of the Hamilton Bulldogs, Niagara IceDogs overage blueliner Mason Howard and Erie Otters netminder Aidan Campbell are also sidelined with injuries.