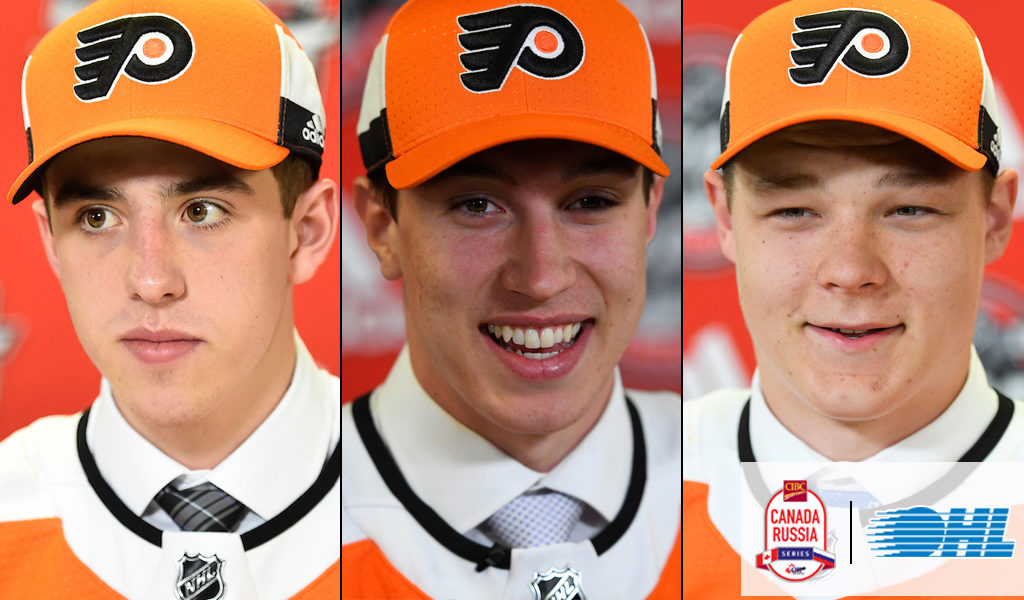 The three OHL forwards had a Windy City whirlwind of a weekend, being selected by the Philadelphia Flyers in the 2017 NHL Draft at the United Center in Chicago. Since then, the trio has shared the ice numerous times as both friend and foe during their time competing against each other in the OHL along with shared Development Camp and Training Camp experiences in Philadelphia.

Tonight, the three suit up together for Team OHL as they take on Russia in Game 3 of the 2018 CIBC Canada Russia Series in Sarnia.

Morgan Frost is trying to make the most of the opportunity as he continues to battle for a spot on Canada’s #WorldJuniors roster.

“We’ve come in here and have had a few good laughs already,” said Ratcliffe, a 6-foot-6 winger who serves as captain of the Guelph Storm. “The three of us are pretty familiar with each other having spent so much time in the summer together, so it’s easy to come in and get right to work.”

The first of the three players picked, Frost went 27th overall before becoming an OHL First Team All-Star in the season that followed. He’s currently third in OHL scoring with 33 points (12-21–33) on a Greyhounds team that enters the weekend as the eighth ranked team in the CHL.

While Frost keeps busy with a Hounds team that travels some of the furthest distances in the OHL, he always finds time to keep up with the Flyers.

“I think I speak for all three of us when I say we’re always interested in how they’re doing,” said the Aurora, Ont. native. “We all had a chance to get to know some of the guys in the NHL and the AHL during our experiences at camp so we’re all pulling for them.”

Thanks @NHLFlyers see you in September! pic.twitter.com/qRurFi3y7I

Tonight’s game is a special opportunity for Strome, who was added as an injury replacement when it was announced that Akil Thomas (Niagara IceDogs) wouldn’t be able to compete in either of the two Team OHL matchups.

The third of three Strome brothers to come through the league, Matthew followed in the footsteps of older brother Dylan when he won an OHL Championship last spring. He joins Hamilton Bulldogs teammate MacKenzie Entwistle in representing the OHL tonight.

“Yeah it was a pleasant surprise when I came to the rink yesterday and our assistant GM Ian Meagher told me I’d have the chance to play,” he said. “I wasn’t expecting it but it’s always an honour to be chosen for an event like this.”

The 6-foot-4, 210Ib. winger has 19 points (6-13–19) through 17 games this season. His draft day experience carries with it a memorable tale that includes the whole family.

In my latest for @PhiladelphiaSN, I take a look at the early season success @Mstrome16 is experiencing with the @BulldogsOHL and discuss what #Flyers fans should be keeping a close eye on. #OHL #LetsGoFlyers https://t.co/HVlBcdSr0l

“Before the draft a lot of my family members wrote down on a piece of paper what team they thought was going to take me. After I was picked and we looked at them all, most of them had written the Flyers down.

“My dad even told me after the fact that the way I play is sort of prototypical of the old Broad Street Bullies,” he added. “Being physical but finding ways to put the puck in the net and that’s what I try to do.”

Catch all of tonight’s action on Sportsnet at 7 ET/4 PT as RJ Broadhead and Sam Cosentino provide the call.