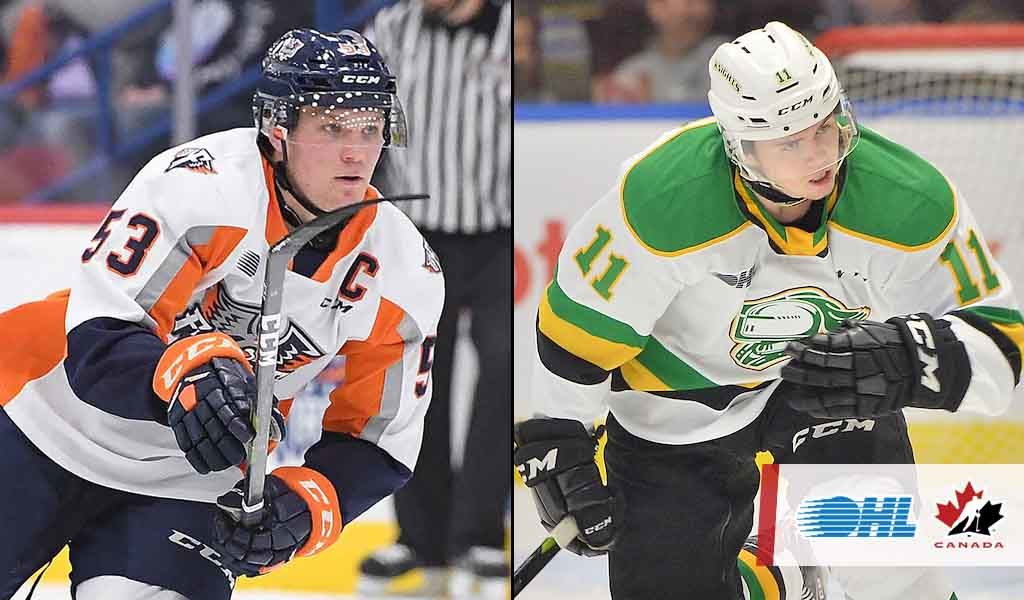 Ty Dellandrea and Connor McMichael have a lot to bring to Team Canada’s roster.

The fourth-year Flint Firebird boasts a self-described strong compete level and high intensity. He takes pride in taking care of his own end and working hard there, leading an explosive offense.

McMichael, too, is an offensive threat. The 18-year-old London Knight is a regular top six scoring forward, but he knows he can also play the bottom six shutdown role. Team Canada head coach Dale Hunter knows it, too.

In fact, both players hold the ability to play in any situation, and are prepared to fit in wherever Hunter wants them to.

On the ice, you could say the two centremen share a lot in common. Both are scoring leaders on their respective teams. Both were first round NHL draft picks.

But off the ice? They’re good pals, and it’s what’s making the World Juniors experience all the more exciting for the duo.

It’s a special opportunity. A dream come true for both.

“It’s something you can’t really describe,” explained McMichael. “Me and my family would always throw on the World Juniors on Boxing Day, so to be the guy on the team this year when I know everyone in Canada is going to be watching is a really amazing feeling.”

Dellandrea, who was picked up by the Dallas Stars in the first round of the 2018 NHL Draft, shares similar sentiments.

“When you make the cuts, it makes you rethink a lot of the memories you had about wanting to grow up and play for the World Juniors around the holiday season,” he said.

“It’s something I’ve been looking forward to for awhile.”

And in that while, the two of them have had numerous discussions about cracking the roster together.

“We talked about it a lot in the summertime when Connor was at summer camp, after his draft,” said Dellandrea of those conversations. McMichael was drafted by the Washington Capitals 25th overall last June.

“We kind of joked about it a bit.”

Dellandrea is a native of Port Perry, Ont., while McMichael hails from Ajax, just 30 minutes away. Of course, both players knew who the other was beforehand, but they first met by coincidence at a Whitby gym around three years ago. Dellandrea had switched to a new gym where McMichael was training with TWIST Performance and Wellness.

“He was a younger guy in the league and I was just getting into the league,” Dellandrea remembered. “We created a friendship from there.”

So when asked about the player they were most looking forward to playing with while sporting the maple leaf in Ostrava, it’s no surprise they both immediately mentioned the other.

“We’ve become close friends over the years, and it’s fun playing against each other,” said Dellandrea.

“So sharing this experience with him is very cool.”

Playing in the OHL’s Western Conference means playing each other four times a year in the regular season. It’s a matchup Dellandrea regularly looks forward to.

“I do like playing against Connor,” he said. “We’re always talking in warmup and bugging each other and friendly chirping on the ice.”

“It’s always cool when I’m in Flint, or when he’s in London, and we get to connect before games,” said McMichael. “He’s one of my closest friends now too so it’s great having him around in the summer. We hang out a lot and we push each other in the gym. It’s a lot of fun.”

Whether they’re on the ice or in the gym, both players also share that mutual desire to learn from one another.

“I’m bugging him in the gym to work a little harder because maybe the gym’s more my thing, and he’s probably more skilled than me on the ice,” laughed Dellandrea.

“We push each other and have little competitions. We help each other be better and it’s fun to work out with a high level, elite player like him.”

“He’s going to be a really good player in the NHL and I hopefully will too, so we just push each other to get stronger and work harder,” said McMichael of his teammate. “If he’s going upweight, I kind of have to match him, or vice versa.”

Bringing a gold medal back to the Durham region where they spend their summers would be yet another recognition they’d get to share. It would be another highly acclaimed on-ice component that they’d have in common and, of course, it’s the goal.

Until then, they’re enjoying the shared experience itself. Amid the nerves and pressure that comes with showcasing their talent on the international stage in a scenario they’ve thought up their entire lives, they’re also relishing in something else: a sense of humour.

“We always call him Mikey D, and he always gives us this weird little grin after we do it. Then he starts laughing,” Dellandrea grinned. “He laughs at everything you say. It’s hilarious.”

It’s another thing they have in common.

“He likes to fool around and joke with me,” said McMichael. “He’s a really funny guy.”