One Win Away: Foegele’s five points fuel Otters in Game 4 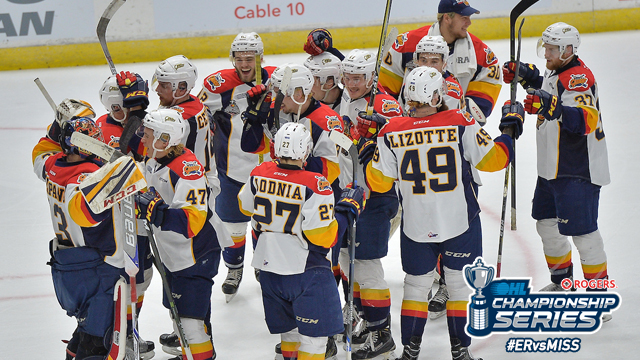 Carolina Hurricanes prospect Warren Foegele (11, 12, 13) netted a hat-trick and chipped in with two assists to bring the Erie Otters within a win of an OHL Championship.

Erie took a 5-2 win in Game 4 of the Rogers OHL Championship Series on Wednesday in Mississauga and Foegele was in control from start to finish, bookending the scoring summary with a marker 27 seconds into the first period before hitting the empty net with 19 seconds left in regulation.

“I’m fortunate to play with two elite players and I thought together we all played pretty well,” said Foegele post-game. “Coming into this we talked about the importance of competing for a full sixty minutes and I think we did that here tonight.”

Foegele played on a line alongside Anthony Cirelli and Kyle Maksimovich, but also saw time with Alex DeBrincat who joined Dylan Strome with a goal and an assist in the victory.

“I think the biggest compliment any player can receive is not what he does on the ice for himself, but does he make his linemates better? I’ve seen this from Warren right through the playoffs.

“It doesn’t matter who he is playing with, but anytime I insert him on a new line, those guys always have their best games and I saw DeBrincat play very well tonight. I’ve moved Warren throughout the lineup and it just seems like everyone who gets the opportunity to play with him usually plays their best.”

Darren Raddysh sprung Foegele in alone just 27 seconds into the first period and he made no mistake, putting the Otters up 1-0 before Dylan Strome (14) finished off a 2-on-0 with DeBrincat just under four minutes later at 4:08 to take the energy out of the Hershey Centre.

The Steelheads would regain some momentum just moments after losing captain Michael McLeod for the remainder of the game as a result of a five minute slashing major.

2017 NHL Draft prospect Owen Tippett (8) busted in on the ensuing penalty kill to beat Troy Timpano on a shorthanded breakaway at 11:40 and cut the Erie lead to one.

A scoreless second period saw the Otters outshoot the Steelheads 15-7 as goaltender Matthew Mancina was big when called upon to keep his club within a goal headed to the third.

The Otters owned the early part of the third period and scored a pair of goals as a result.

DeBrincat (13) struck shorthanded as Erie took advantage of some wide open space in the offensive zone. Foegele kept the puck in at the blue line, walking across to find an open Darren Raddysh who quickly dished to DeBrincat down the middle for the finish just 1:33 into the period.

Foegele picked up his second goal of the night at 7:13 to put Erie up 4-1, getting a little help from a backchecking Steelheads forward who slid into his own net to knock Mancina and the puck underneath him over the goal line.

The @ErieOtters take a 3-1 lead in the #Rogers #OHLPlayoffs Championship Series.

The Fish didn’t quit despite the three-goal deficit as Tippett got back on the board at 11:06. Mancina made a stop on Foegele at one end before Tippett picked up the puck in transition, blowing past an Erie defender before rifling a wrister past the blocker side of Timpano to cut the Otter lead to two.

Foegele hit the empty net inside the final 20 seconds of regulation to seal the deal and send the Otters back to Erie with a 3-1 series lead.

Erie outshot Mississauga 37-24, doing so without the services of defenceman Jordan Sambrook for half of the game after he left with an injury in the second period.

“I think our top players played very well,” Knoblauch said. “Obviously Foegele was very good, DeBrincat, Strome, Cirelli, Darren Raddysh, Cernak, when those guys play well you usually get the result you’re looking for and no exception tonight, especially DeBrincat and Foegele had a lot of good scoring opportunities tonight.”

The Steelheads head into Erie on Friday for Game 5 down 3-1 in the series. They’ll look to regroup before facing elimination on the road.

“I thought our guys showed a lot of character trying to fight through some adversity trying to get back in the game,” said Mississauga head coach James Richmond. “We just have to put it behind us now and again, it’s the first to four, they’re up 3-to-1 but they haven’t hit four yet and we’ll try and get our second win on Friday.”

Veteran Cam Lizotte made his series debut for Erie in Game 4 while defenceman Josh Wainman slotted into the lineup in the place of Mitchell Byrne (illness).

Alex DeBrincat added to his OHL Playoff scoring lead with two points, bringing his overall total to 37 points (13-24–37) over 21 games.

The Otters look to close out the series and capture their first OHL Championship since 2002 on Friday night in Erie.