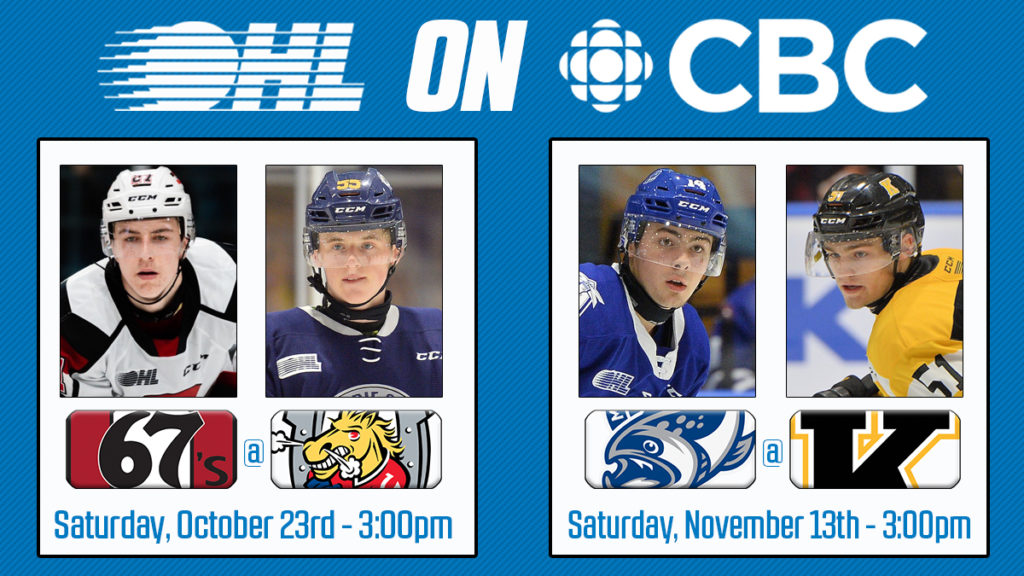 Toronto, Ont. – The Canadian Hockey League announced today that six games from the upcoming 2021-22 regular season schedule will be televised by CBC as part of the CHL’s new multi-platform, multi-year broadcast rights partnership.

“We are very excited to drop the puck on Saturday afternoons during the 2021-22 season with the CBC,” said CHL President Dan MacKenzie. “Their iconic position in Canadian hockey combined with the CHL’s role as the top development league in the world will make for a winning partnership.”

The six games include representation from each of the CHL’s three member leagues with action beginning Saturday, Oct. 2 featuring the Regina Pats and 2023 NHL Draft favourite Connor Bedard hosting the Prince Albert Raiders. The schedule concludes with a matinee contest featuring the OHL’s Mississauga Steelheads taking on the Kingston Frontenacs and 2022 NHL Draft headliner Shane Wright. 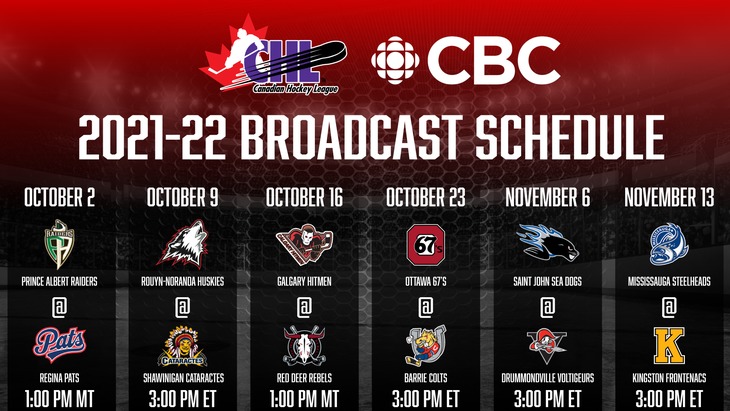 “We’re proud to partner with the CHL and we’re looking forward to sharing the excitement of Canadian major junior hockey with fans across the country this fall,” said Chris Wilson, Executive Director, Sports & Olympics, CBC. “We’re committed to engaging our audiences on a regional and community level, and this partnership with the CHL helps to further that commitment by providing fans more opportunities to cheer on their local teams.”

In addition to being broadcast on CBC TV, all six games will also be available via CBCSports.ca, the CBC Sports app and the free CBC Gem streaming service. Beginning in November, CBC Gem, CBCSports.ca and the CBC Sports app will offer live streaming coverage of one CHL game per week through the end of the regular season. The schedule for these games will be confirmed in the coming weeks.

The 2021-22 CHL regular season begins September 30 as part of an exciting new campaign that features the stars of tomorrow in Bedard and Wright in addition to the return of the CHL’s signature national events including the 2022 Memorial Cup presented by Kia.

About CBC/Radio-Canada
CBC/Radio-Canada is Canada’s national public broadcaster. Through our mandate to inform, enlighten and entertain, we play a central role in strengthening Canadian culture. As Canada’s trusted news source, we offer a uniquely Canadian perspective on news, current affairs and world affairs. Our distinctively homegrown entertainment programming draws audiences from across the country. Deeply rooted in communities, CBC/Radio-Canada offers diverse content in English, French and eight Indigenous languages. We also deliver content in Spanish, Arabic, Chinese, Punjabi and Tagalog, as well as both official languages, through Radio Canada International (RCI). We are leading the transformation to meet the needs of Canadians in a digital world.