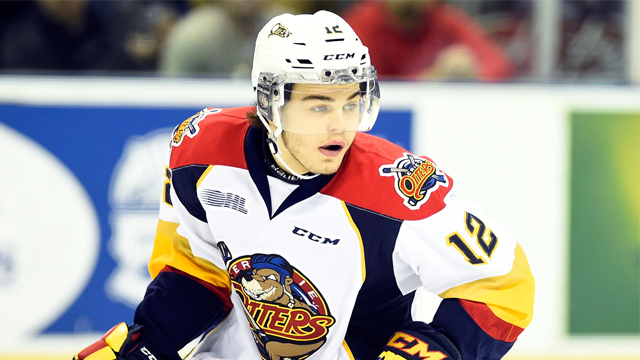 Toronto, ON – The Canadian Hockey League today announced that Chicago Blackhawks prospect Alex DeBrincat of the Erie Otters is the CHL Player of the Week for the week ending November 6 after recording 11 points in three games scoring five goals with six assists along with a plus-minus rating of plus-3.

DeBrincat produced a trio of multi-point performances last week helping the OHL’s first place Otters improve their record to 13-3-1-0.  He scored the game-winning goal in all three contests including the overtime winner on Wednesday morning, part of a two-goal and one assist effort, as first star of a 5-4 School Day win over the Guelph Storm.  On Friday night he scored a goal and two assists in a 7-4 win over the Mississauga Steelheads, then finished the week by matching a career-high with five points including two goals and three assists receiving first star honours in a 7-3 comeback win against the Kitchener Rangers.

An 18-year-old from Farmington Hills, Michigan, DeBrincat is playing in his third career OHL season with the Otters.  The 2015 CHL Rookie of the Year has recorded back-to-back 51-goal campaigns and currently leads the OHL with 17 goals ranking second in points with 35 through 14 games.  The second round pick of the Blackhawks in the 2016 NHL Draft was signed to an entry-level contract on Monday.

Also considered for the award this week Antoine Waked of the Rouyn-Noranda Huskies who scored five goals and four assists for nine points in three games, and Washington Capitals prospect Connor Hobbs of the Regina Pats with one goal and six assists for seven points in two games.