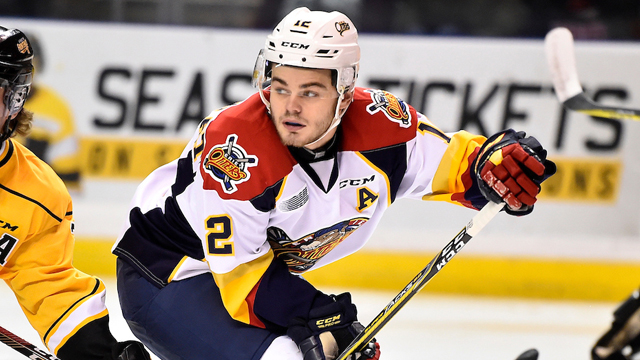 Toronto, ON – The Canadian Hockey League today announced that Chicago Blackhawks prospect Alex DeBrincat of the Erie Otters is the CHL Player of the Week for the week ending February 5 with 11 points including six goals and five assists along with a plus-minus rating of plus-1 in three games.

DeBrincat recorded a trio of multi-point performances on the road and became the Otters all-time leading goal scorer last week as his club extended their winning-streak to eight.  His 142nd career goal came on Thursday night as part of a two-goal effort earning second star of a 5-4 win over the Peterborough Petes surpassing Brad Boyes for first place in the Otters record books.  DeBrincat earned first star honours twice to finish the weekend road trip including Saturday with two goals and three assists in an 8-4 win over the Ottawa 67’s, and Sunday with two goals and two assists in a 6-1 win over the Kingston Frontenacs.  The Otters are first place in the OHL’s overall standings with a 37-10-2-1 record.

A 19-year-old from Farmington Hills, Michigan, DeBrincat leads the OHL in scoring with 92 points in 45 games including 44 goals and 48 assists after recording back-to-back 50-goal and 100-point campaigns during his first two CHL seasons.  The second round pick of the Blackhawks in the 2016 NHL Draft is also the first two-time weekly award recipient in 2016-17.