Otters’ Brown is OHL Player of the Week 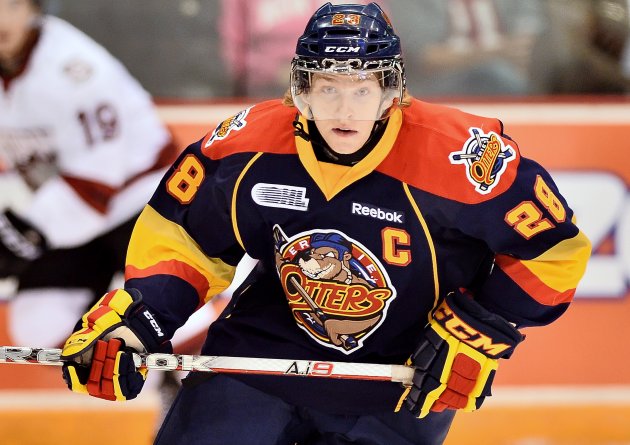 Toronto, ON – The Ontario Hockey League today announced that Toronto Maple Leafs prospect Connor Brown of the Erie Otters is the OHL Player of the Week with seven points in three games scoring three goals and four assists for the week ending October 13.

Brown took over the OHL scoring lead with three multi-point games but more importantly helped the Otters pick up three wins this past week moving the club into second place in the Midwest Division standings with 13 points.  On Wednesday night he picked up a shorthanded marker plus an assist as second star of a 3-2 win over the Owen Sound Attack, then tallied three assists on Friday night as part of the Otters’ 4-0 road win over another divisional opponent the Kitchener Rangers.  Back home on Saturday, Brown scored twice in regulation then added one more in the shootout to help lift the Otters to a 6-5 shootout win over the Saginaw Spirit where he claimed first star honours.

Brown, a 19-year-old from Toronto, ON, is playing in his third OHL season.  The Otters’ captain was selected in the sixth round of the 2012 NHL Draft by the Maple Leafs and currently leads the OHL with 20 points in nine games scoring nine goals and 11 assists after producing 69 points in 63 games last season.

Honourable mention for the award this week goes to Carolina Hurricanes prospect Brock McGinn of the Guelph Storm who also scored three goals and four assists for seven points in three games, while 2014 NHL Draft prospect Brendan Perlini of the Niagara IceDogs scored three goals and two assists as first star of a 7-2 win over the Attack on Thursday.  In goal, the Otters’ Oscar Dansk, a Columbus Blue Jackets prospect, went 2-0-0-0 with a shutout victory along with a goals-against-average of 1.00 and save percentage of .961.